🗳️ Welcome to our Politics feed where we Tag important topics and Flag key takeaways. 📭 Sign up to our nonpartisan newsletter to have these stories delivered directly to your inbox every morning. 📷 Cover: TTF Visuals.

The 2020 Census hasn’t even started – but it has already kicked off spirited fights.

A Supreme Court case, decided last year, blocked a Trump administration proposal to ask every respondent if they were a citizen.

Meanwhile, there are three pending federal court suits in which plaintiffs for civil rights groups and one city claim that the administration has not done sufficient planning or provided enough funding for Census 2020.

Census 2020 is far from the first census to set off bitter political fights. One hundred years ago, results from Census 1920 initiated a decadelong struggle about how to allocate a state’s seats in Congress. The political arguments were so bitter that Congress eventually decided they would not use Census 1920 results.

Could this happen again?

Power in the census

The framers of the Constitution mandated a count of all people every ten years, in order to allocate seats in Congress and the Electoral College on the basis of each state’s population.

The results of the census shift political power and money. At present, US$1.5 trillion in federal spending is distributed to states and local governments every year on the basis of data gathered by the Census Bureau.

I am a demographer who has been teaching about the nation’s population trends since the early 1960s. I have analyzed census data for decades. In Census 2000, I was an enumerator and Census 2010, an address lister.

The 2020 Census asks just seven questions. Back in 1910, the census posed 32 questions, with an additional array of questions for farmers. One of those queries asked farmers the value of the products they sold during the previous year.

Since 1790, the official census start date had been either the first Monday of August or June 1. But, for the 1920 census, the Department of Agriculture presumed they would obtain more accurate information about the value of crops if the census were taken on Jan. 1. They feared farmers would forget financial details over the winter.

Congress approved the change without realizing the implications. 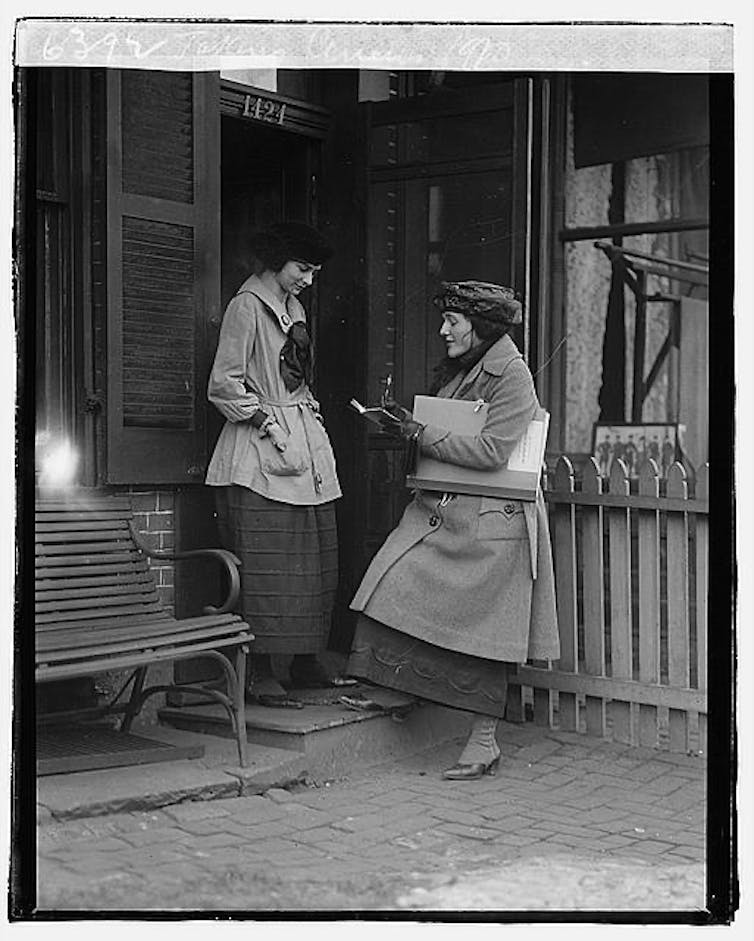 Taking the census in 1920. Library of Congress

Census 1920 results were released in December of that year, and they surprised the members of Congress.

At that time, there was vibrant opposition to foreigners coming into the U.S. The nation had already banned immigration from Asia, but many of those arrived after 1880 were Catholics and Jews who came from southern and eastern Europe. Many Americans feared they would never assimilate.

The 1920 census results showed that the Northeastern and industrial Midwestern states had grown rapidly, thanks to immigration from Europe. After an interruption for World War I, immigration spiked to 800,000 in 1920.

In response to census results and the unexpected “flood” of immigrants, Congress, in 1921, enacted an Emergency Immigration Quota Act, restricting immigration.

That was just the first step in a decadelong controversy involving key issues that shaped the nation. Would there be continued immigration from eastern and southern Europe? Would political power shift to the states with the biggest cities?

The 1920 results would have shifted political power away from the South and away from the agricultural states of the Midwest, to the northeastern states and those states Americans now call the Rust Belt.

Representatives of farm states contended that the new Jan. 1 census date meant that many men who spent most of the year working on farms were counted in cities where they spent just a few winter months.

Southerners in Congress argued that congressional seats should be allocated on the number of citizens only, since this would protect their representation.

Congressmen from growing states emphasized that the Constitution said nothing about citizens. They argued that a constitutional amendment was required to limit congressional apportionment to citizens only.

Northeastern members also pointed to an obscure clause from the 14th Amendment that permitted Congress to diminish a state’s representation if they determined that a state abridged the right of male citizens to vote. Southern states attempted to accomplish that with poll taxes, literacy tests, grandfather clauses and refusal to register African Americans.

From 1800 to 1910, Congress had increased its membership after censuses, to prevent states from losing a seat. Vibrant controversy raged about the size of Congress, since different numbers favored different states.

Late in the 1920s, it became clear that Congress was so riven they would never use Census 1920 data to reapportion Congress. In 1929, they enacted legislation specifying which method would be used to allocate seats on the basis of the 1930 count.

Census 1920 is unique, since it was the only one not used for reapportionment. 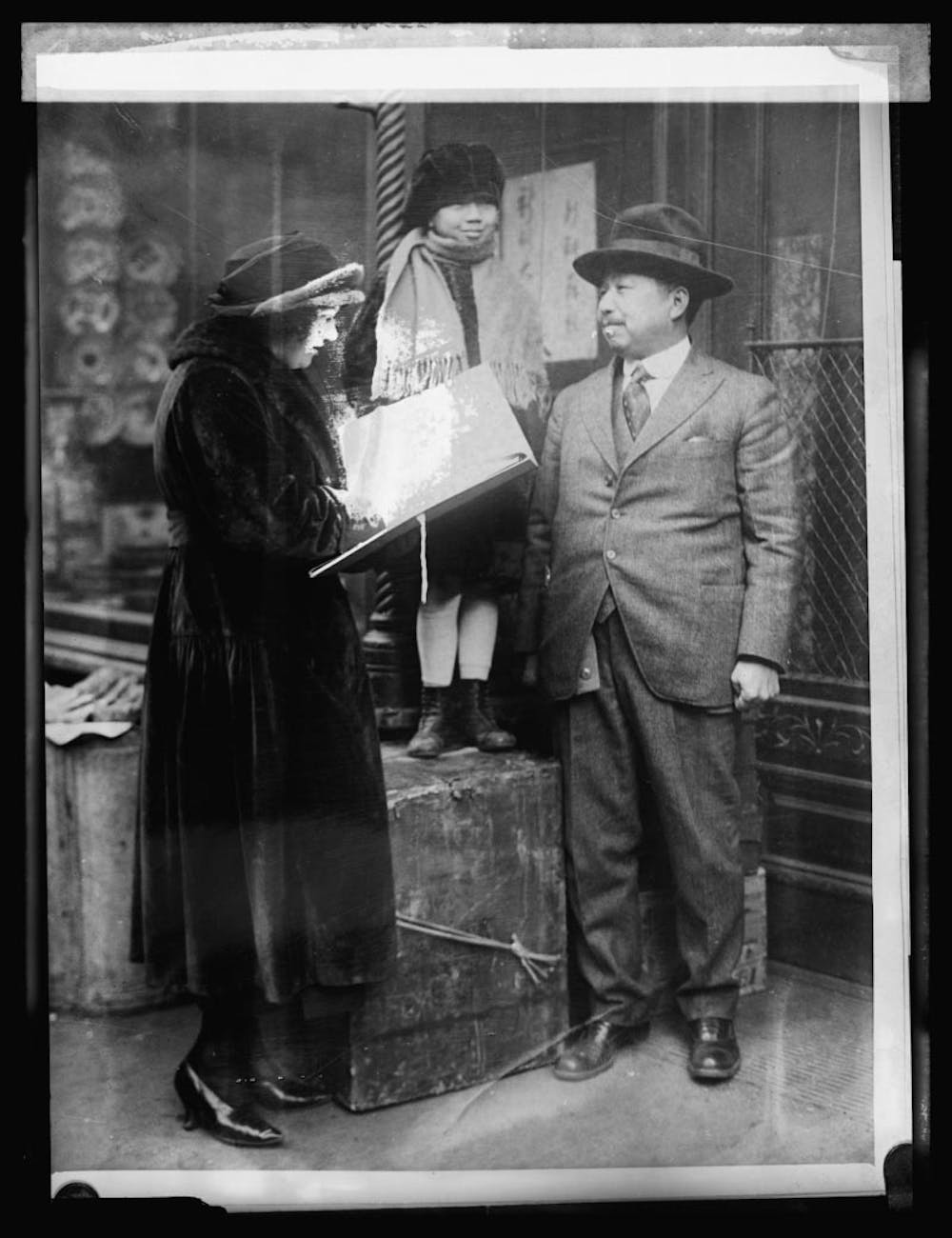 Echoes of the past

Is there any chance the census count of 2020 will be dismissed?

Just as in the 1920, there are conflicting views today about immigration and how much representation states should have in Congress and the Electoral College.

In the pending federal suits, plaintiffs contend that the administration’s lack of sufficient planning and funding will substantially undercount Americans, especially minority groups.

Should federal judges find in the plaintiff’s favor, members of Congress may be skeptical about data from Census 2020.

What’s more, at present, there are many individuals and several organizations arguing that congressional and Electoral College seats should be allocated according to the count of citizens or the count of voting age citizens, as opposed to all residents.

The state of Alabama has already filed suit contending that Alabama will likely lose a seat to Texas because aliens are included in the count used to apportion seats. If Congress were to apportion seats on the basis of citizens only, the Supreme Court may have to rule about what the framers of the Constitution meant when they defined the apportionment population.

Finally, the nation’s population is currently three times as large as in 1911, when Congress decided that 435 was the appropriate size of membership. On the basis of 2019 data, it seems likely that 10 states will lose a representative.

Some political analysts and advocates favor an expansion of Congress, since that would mean that members would represent fewer constituents. If Congress, next year, decided to increase its size to 460, no state would lose any of its current seats.

A new Congress will be elected this November and they will meet for the first time on Jan. 3, 2021. One of their first obligations will be reapportionment. Will this go smoothly – or will the controversies of the 1920s once again influence what use Congress makes of census counts?

Walter Reynolds Farley, Professor Emeritus of Sociology, University of Michigan. This article is republished from The Conversation under a Creative Commons license. Read the original article. Be sure to sign up for Tag The Flag’s nonpartisan newsletter to have articles like this delivered directly to your inbox every weekday morning.