🌎 Welcome to our Geopolitics feed where we Tag Flags from all over the world and highlight key takeaways. 📭 Sign up to our nonpartisan newsletter to have these stories delivered directly to your inbox every morning. 📷 Cover: The Haitian Flag

More than 300,000 people were killed, several hundred thousand were injured and nearly 1.5 million were left homeless when magnitude 7 earthquake hit Haiti on Jan. 12, 2010.

On that day, the workspace that my colleague Joseph Jr Clorméus, who co-authored this article, usually occupied at the Ministry of National Education completely collapsed. He witnessed an apocalyptic spectacle: colleagues had lost their lives while others were having limbs amputated to escape certain death under the rubble. Outside, corpses littered the streets of the capital while the horrifying spectacle of blood mixed with concrete and dust offered itself to the desolate gaze of a traumatized population.

Ten years later, Haiti hasn’t recovered from this disaster, despite billions of dollars being spent in the country.

Two main factors explain, in our view, the magnitude of this tragedy: the weakness of Haitian public institutions and the disorganization of international aid, particularly from NGOs. 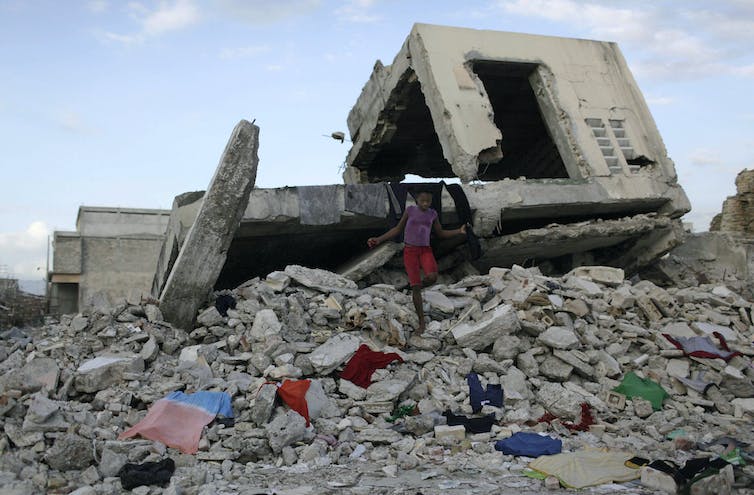 A few months after the earthquake, a girl walks on debris as she uses the structure of a damaged building in Port-au-Prince to air-dry clothes. AP Photo/Ariana Cubillos

The weakness of the Haitian state

Haiti is vulnerable to earthquakes. Historically, they have been managed by the military, which played an important role in both national development and natural disaster management. But the speedy dismantling of the national army under Jean-Bertrand Aristide’s presidency did not allow for the transfer of the army’s natural disaster management skills to other civilian public institutions.

Indeed, a great deal of know-how disappeared. Despite the presence of several government bodies that had tried to develop skills in relation to earthquakes, no reliable operational body was able to manage the institutional vacuum left by the army. Today, Haiti remains very vulnerable to natural disasters on its territory.

The succession of unstable governments over the past four decades hasn’t helped either. These have significantly weakened the central administration, which then had little capacity to manage and control the country’s territory.

For example, Port-au-Prince, a city originally designed for 3,000 people, was home to almost a million. Ten years later, we can only note that nothing has really changed in this respect. The Haitian state has shown itself incapable of decentralizing and developing its rural environment, which is experiencing an exodus year after year.

The capital and its surroundings are overpopulated and there are no real urban planning policies to impose standards and counter the anarchic constructions that proliferate the city. In this context, any major earthquake could only lead to the disastrous consequences that the country has experienced.

Another problem: in 2010, the Haitian public administration, far from having been reformed, was mainly concerned with collecting taxes on property without any real control over the territory.

The combination of overcrowding, chaotic urban development without a regional development policy, a flagrant lack of resources to intervene on its territory and the skills of its staff has meant that the Haitian public administration has never been able to anticipate the impacts of an earthquake. 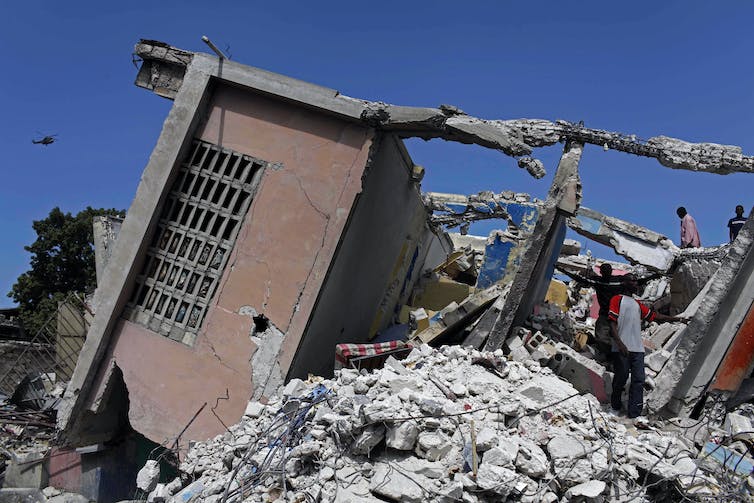 People stand in the rubble of a collapsed building in Port-au-Prince following the earthquake. AP Photo/Rodrigo And, File

The weakness of the Haiti’s public administration is compounded by the disorganization of international aid. Following a decree adopted in 1989 (which amended Article 13 of the 1982 law governing NGOs), responsibility for the co-ordination and supervision of NGO activities on the territory of the Republic of Haiti was entrusted to the Ministry of Planning and External Co-operation (MPCE).

In the aftermath of the earthquake, many studies reported on the presence of thousands of NGOs in the country. However, on its official list, the MPCE recognized barely 300 of them. It can therefore be concluded that the majority of these NGOs were operating in near obscurity.

Several studies have also shown, and we’ve seen on the ground, that the international community’s assistance deployed immediately after the earthquake failed to meet a humanitarian challenge of such magnitude. There was no co-ordination in the interventions of friendly countries in order to optimize the efforts on behalf of the victims. There was great humanitarian disorganization and even a failure on the part of the international community, which had to improvise ineffectively to co-manage a disaster.

With a presence on the ground as early as 2012, we’ve observed that the majority of NGOs arrived in Haiti not to respond to a need expressed by the Haitian government, but rather to serve their own interests, as Dr. Joanne Liu, former president of Médecins Sans Frontières, reports.

There was no co-ordination between them, nor was there any co-ordination with the government. Furthermore, although UN forces deployed with MINUSTAH were present in Haiti, the forces were fragmented and operated under often incompatible models and values. Aid was inefficient, even harmful. The scandal of the reintroduction of cholera in Haiti underscores this reality. 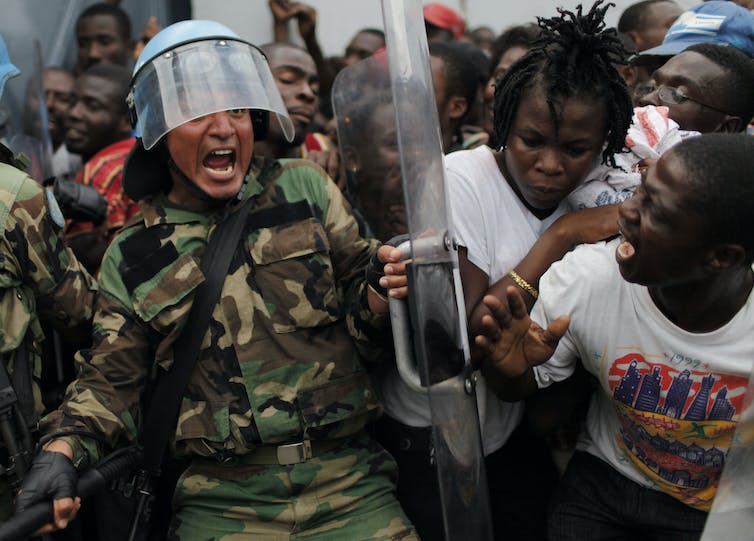 A Peruvian peacekeeper tries to control a crowd during the distribution of food for earthquake survivors at a warehouse in Port-au-Prince on Jan. 19, 2010. UN aid has been largely ineffective. AP Photo/Ariana Cubillos, File

Despite the fact that billions of dollars had been spent in the country, according to international reports, five years after the disaster, debris was still lying in the streets, thousands of people were still living in refugee camps and the majority of public buildings had not been rebuilt.

All of this testifies to the serious difficulties of co-ordination on the ground.

A decade later, the challenges are still immense for Haiti since it must develop construction policies that fit into a certain vision of urban planning. It must also rebuild the archives of public institutions that have been damaged or have disappeared, and it must help post-earthquake generations learn from the past, develop and implement an emergency plan for natural disasters, and design and implement policies and spaces adapted for people with disabilities.

Today, international development practices are seen to be based on a wealth accumulation perspective, giving priority to private sector interests. Canada’s initiatives to direct its aid to the development of the mining sector and free-trade zones in Haiti are evidence of this.

What’s more, Canada’s decision to freeze funding for new projects in Haiti raises several questions: why leave Haiti in such a difficult position? Is the decision intended to make the Haitian state face up to its responsibilities or simply to take the Canadian government off the hook for the failure of international aid in that country? Is this an admission of powerlessness in the face of the profound institutional weaknesses in Haiti?

As we look back at Jan. 12, 2010, we raise a question as troubling as it is fundamental: Has the Haitian government and the international community really learned any lessons from the earthquake?