Cover: A group of Islamic State fighters surrender in Afghanistan. Many of their comrades are still in the fight. Noorullah Shirzada/AFP via Getty Images

In a series of bloody campaigns from 2014 to 2019, a multinational military coalition drove the Islamic State group, often known as ISIS, out of much of the Iraqi and Syrian territory that the strict militant theocracy had brutally governed.

But the Pentagon and the United Nations both estimate that the group still has as many as 30,000 active insurgents in the region. Thousands more IS-aligned fighters are spread across Africa and Asia, from the scrublands of Mali and Niger to the deserts of Iraq and mountains of Afghanistan, to the island jungles of the Philippines.

I keep track of the loose alliance of various global affiliates and insurgent groups collectively known as the Islamic State. It’s part of my research chronicling America’s wars in remote lands where I have worked for the CIA and the U.S. Army. I also monitor Islamic State activities around the world for a University of Massachusetts-Dartmouth project I lead called MappingISIS.com

In recent months, the Islamic State group has reconstituted itself in the Syria-Iraq region and continues to inspire mayhem across the globe.

Iraq, the homeland of jihadocracy

The “Dawla Islamia,” or Islamic State, began as a Sunni Muslim insurgent group in Iraq amid the maelstrom of sectarian violence that followed the U.S.-led 2003 invasion. Up until then, Saddam Hussein’s ruling Baathist party had suppressed Islamist jihadi groups of all stripes, limiting influence in Iraq from Shiite-dominated Iran and Sunni-fundamentalist Saudi Arabia.

In 2014 IS blitzed across the region and took over a wide swath of Iraq and Syria, where it functioned as a de facto government. It also maintained a ferocious fighting force, always seeking to expand the reach of its so-called “caliphate” fundamentalist Islamic regime.

Since major defeats in 2017, the Islamic State group has retreated to a largely inaccessible sanctuary in the remote Qara Chok, Hamrin and Makhmoul mountains of northeastern Iraq. From there, they regularly attack U.S. and Iraqi troops, Kurdish forces and local Shiite militias. They also attract new Sunni recruits, resentful of discrimination and repression from the currently Shiite-dominated Iraqi government.

In the summer of 2019, IS fighters in northern Iraq also burned hundreds of acres of crops belonging to suspected pro-government villagers whom they labeled “infidels.”

Most recently, IS fighters have been heartened by the U.S. drone strike that killed Iranian Maj. Gen. Qassem Soleimani, who had led Iraqi Shiite militias against them. Soleimani’s death, which Islamic State leaders hailed as “divine intervention,” led to a halt in joint U.S.-Iraqi operations against the Islamic State. Iraq’s parliament and prime minister have called for all U.S. troops to leave Iraq, which would provide opportunity for IS forces to expand their operations.

From 2015 to 2019, the Islamic State ran a government in the Syrian territory it occupied, based in the Raqqa province of northeastern Syria. That organization slowly collapsed under assaults by U.S.-backed Kurdish forces and the Syrian Arab Army, backed by Russia and Iran. As they retreated, IS leaders hid weapons caches and millions of dollars in the vast Syrian desert, and reconstituted their movement as a guerrilla fighting force.

Since the defeat of their physical state, resilient IS insurgents in Syria have killed pro-government Russian soldiers, massacred pro-government Druze tribesmen, and attacked anti-ISIS Kurdish fighters and intelligence officers with car bombs and roadside bombs.

Since President Donald Trump’s October 2019 announcement that U.S. troops would retreat from their bases in northern Syria, many Islamic State fighters taken prisoner by the Kurds have also broken out of their prisons.

Nevertheless, roughly 70,000 Islamic State members and supporters – men, women and children – still remain in their Kurdish-guarded internment camps, which have, however, become training centers for a new generation of jihadist “Cubs of the Calihphate.”

A November 2019 U.S. Delta Force operation led to the death of Abu Bakr al-Baghdadi, the Islamic State’s messianic leader – but the group has already chosen a successor and has vowed to avenge al-Baghdadi’s death.

In 2015, the members of the Boko Haram Islamist terrorist group, notorious for kidnapping local schoolgirls, swore allegiance to the Islamic State.

As many as 4,000 of its fighters operate in the northeastern jungles of Nigeria, attacking army outposts, remote villages and even towns. They kidnap civilians and kill soldiers not just in Nigeria, but in the neighboring countries of Chad, Niger and Burkina Faso, defying multi-national military efforts to suppress their activity.

Afghanistan, the fortress in the mountains

In 2015, disgruntled, hardcore ex-Taliban from Pakistan and Afghanistan’s dominant tribe, the Aryan Pashtuns, formed an Afghan affiliate of the Islamic State in the remote, forested mountains of the country’s eastern Nangarhar Province.

From this rugged base, they carried out a deadly wave of massive suicide bombings in Kabul and elsewhere. They also publicly executed tribesmen and even Taliban whom they accused of having insufficiently extreme Islamist beliefs.

At its peak, this group had about 3,000 fighters, but U.S. and Afghan National Army attacks, including one that used the world’s largest non-nuclear bomb, have whittled their numbers down to about 300. A top Afghan leader, Abdullah Abdullah, described them to me as “fanatics who are beyond the pale and are incapable of being negotiated with.” 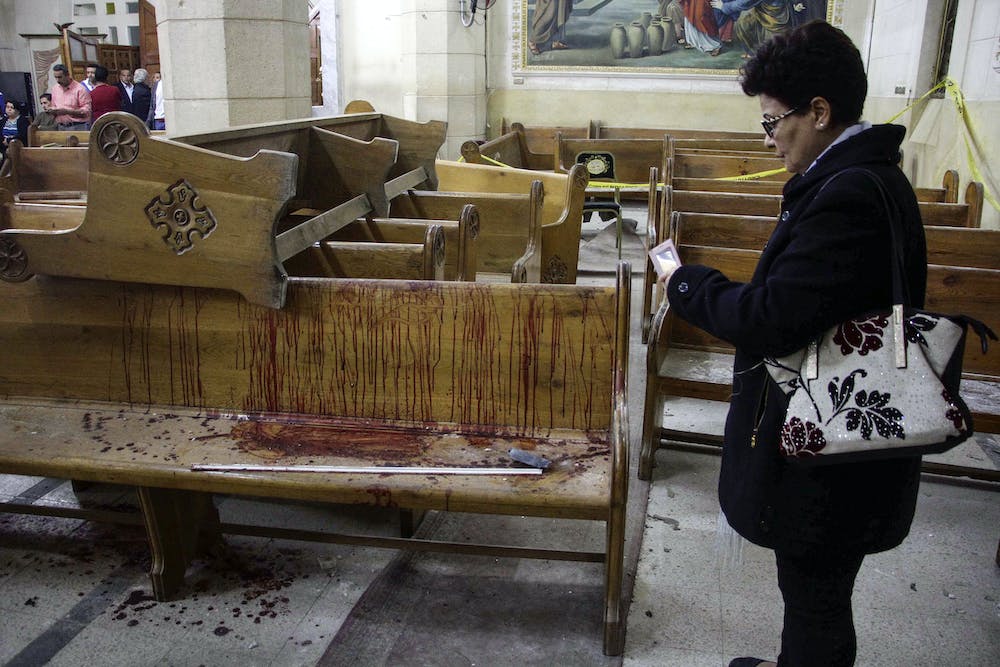 A woman photographs the scene after an Islamic State bombing of a Coptic Christian church in Egypt in 2017. STRINGER/AFP via Getty Images

The group remains active despite counter-terrorism operations by the Egyptian military, sometimes with assistance from the Israeli Air Force.Since 2014, a group of Bedouin in the northern Sinai Peninsula, angry with the secular policies of the Egyptian government and perceived economic discrimination, have conducted several attacks in the name of the Islamic State. The group blew up a Russian airliner carrying more than 200 people, massacred dozens of Coptic Christians in their churches, and slaughtered more than 200 worshipers at a Sufi Muslim mosque in the Sinai.

The Philippines, the Pacific outpost

In 2016, several groups of local jihadist terrorists and kidnappers in the lawless jungles of the predominantly Muslim islands of Basilan and Mindanao swore an oath of allegiance to the Islamic State.

These groups’ most notable attack was their bloody conquest of the town of Marawi in 2017. They burned Catholic churches and took over 1,700 people hostage before being driven back by a U.S.-backed army of 10,000 Filipino troops. The battle saw the most intense fighting in the nation since World War II and led to the deaths of over 900 insurgents. The Philippine IS franchise nonetheless remains active and most recently blew up a Catholic church in January 2019.

North Libyan jihadists swore allegiance to the Islamic State in 2015 and received assistance, training and financial support from IS commanders dispatched from Syria. The terrorists captured the north Libyan coastal town of Sirte, which they nicknamed “Raqqa by the Sea,” as a fallback capital should IS lose its core lands in Syria and Iraq.

After months of intense urban combat, U.S.-backed militias from the nearby town of Misurata retook Sirte and surrounding regions in late 2016. Islamic State fighters retreated into the remote southern desert, now their base for bold insurgent attacks, such as the April 2019 seizure of a town and public beheading of a local leader. The Pentagon continues to conduct airstrikes on the group’s bases.

There are other Islamic State affiliates in lands as far afield as Niger, Mali, Yemen and Somalia. Terror cells claiming affiliation with IS have carried out attacks in the name of the Islamic State in places like Turkey, Sri Lanka, Bangladesh, Tunisia, Saudi Arabia, Iran, Dagestan and Kashmir.

Among IS’s resilient supporters are diehards who see military setbacks not as permanent defeats, but as tests of their faith in a trans-generational forever war designed to bring about the apocalypse.

Brian Glyn Williams, Professor of Islamic History, University of Massachusetts Dartmouth. This article is republished from The Conversation under a Creative Commons license. Read the original article.