The two major events that have shaken Iran in recent weeks have also had major internal repercussions.

The assassination of Qassem Soleimani by an American drone lit the fuse, sending shock waves around the world and increasing the risk of an escalation of armed conflict between Iran and the United States. Following this assassination, Iran was the scene of massive demonstrations to commemorate the Iranian general and denounce the Americans.

A few days later, as Iran launched a retaliatory raid on U.S. bases in Iraq, a Ukrainian civilian plane crashed near Tehran airport, killing 176 people, including 57 Canadians. This tragedy provoked anti-regime demonstrations this time. Thousands of Iranians took to the streets, angry at their government when it admitted responsibility for the crash after three days of denial. 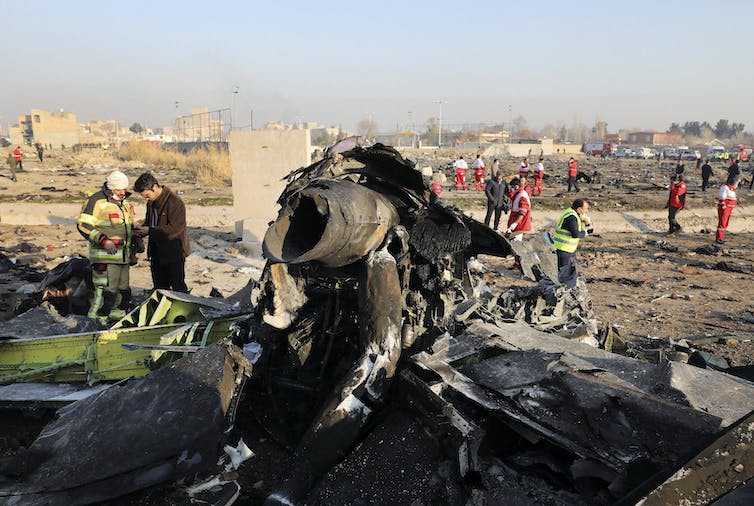 Debris from the plane crash near Tehran airport. The Canadian Press/AP-Ebrahim Noroozi

Thus, in the space of 10 days, Iran was the scene of pro- and anti-regime demonstrations.

To better understand the current context in Iran, it should be noted that Soleimani was assassinated a month and a half after the largest anti-regime demonstrations, which took place last November. These protests were so threatening to the regime that Supreme Leader Khamenei led the deadliest crackdown since 1979, saying: “The Islamic Republic is in danger. Everything necessary must be done. This is an order.”

As many as 1,500 protesters were reportedly killed in November. The repression was so severe that the security forces even prevented mourning ceremonies for some victims.

Why did so many mourn Soleimani?

How did the regime manage to bring so many people to the streets for Soleimani in a climate of public discontent against both the reformist and conservative factions of the regime? There are several factors that explain how Tehran managed to give this illusion of unity by using Soleimani’s funeral. 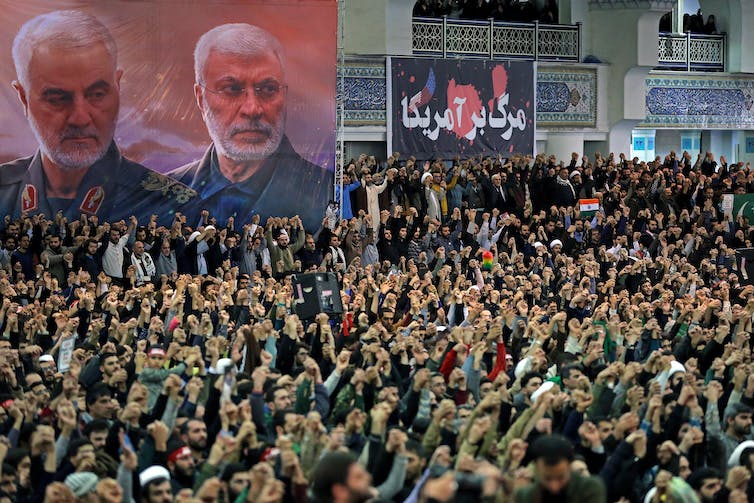 A demonstration near Tehran’s Great Mosque in honor of General Ghassem Soleimani. Supreme Leader Ayatollah Khameini said in his sermon that U.S. President Donald Trump was a ‘clown.’ Office of the Iranian Supreme Leader via AP

First of all, Soleimani was very popular among both the reformist and conservative factions of the regime. His funeral received enormous media coverage in Iran. This contrasted with the non-existent coverage surrounding the November anti-regime protests targeting both reformers and conservatives. The authorities blocked internet access for more than seven days while they massacred protesters in the streets, according to a reporting by France 24.

Second, the state deployed enormous resources to increase the number of participants in the pro-Soleimani demonstrations. Students, civil servants and shopkeepers were forced to go attend..

As a Persian BBC journalist so aptly said about the regime’s ability to orchestrate their own demonstrations:

“The organizers are now experts in their work. From declaring national holidays to gathering university students to requiring military and civil servants to go out with their families, every means has been used to gather the crowds. Buses, trains and trucks are provided to transport people from villages and towns across Iran to the rallies that are constantly announced on state television.”

That said, there are also citizens who are truly fascinated by Soleimani.

For several years now, there has been a certain craze for the general, who is very present on state television, in the sermons of the mosques and even with some celebrities. Soleimani is viewed in Iran as a hero who saved the Middle East from the influence of the Islamic State (ISIS). Because of his role in the fight against the terrorist organization, Soleimani embodies for some Iranians the image of a benevolent commander who is above the internal politics of the country. The presence of these admirers was also marked in these pro-Soleimani demonstrations.

Demonstrations after the crash

But the apparent unanimity that followed Soleimani’s assassination, commented on by many as a rally around the flag and against the Americans, quickly collapsed in the face of popular demands and general discontent. 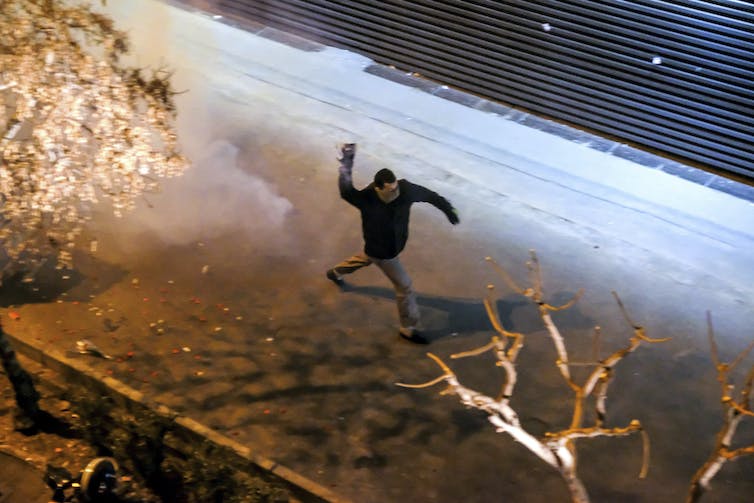 A demonstrator prepares to throw a tear gas cannister at police outside Amir Kabir University in Tehran during a demonstration in memory of the victims of Flight PS752. The apparent unanimity that followed the assassination of Soleimani quickly collapsed. AP Photo

As soon as the Iranian leaders announced, in the face of international pressure, that the Ukraine Airlines passenger jet had been shot down by an Iranian missile – it is now known that it was two missiles – anti-regime demonstrations broke out in major cities such as Tehran, Mashhad, Esfahan and Racht, as well as in several other regions.

Protesters chanted many of the same anti-regime slogans as they did in November: “We were told that the enemy is the United States. Yet our enemy is here.” The demonstrators were dispersed by force, which is the usual modus operandi of the Iranian republic. 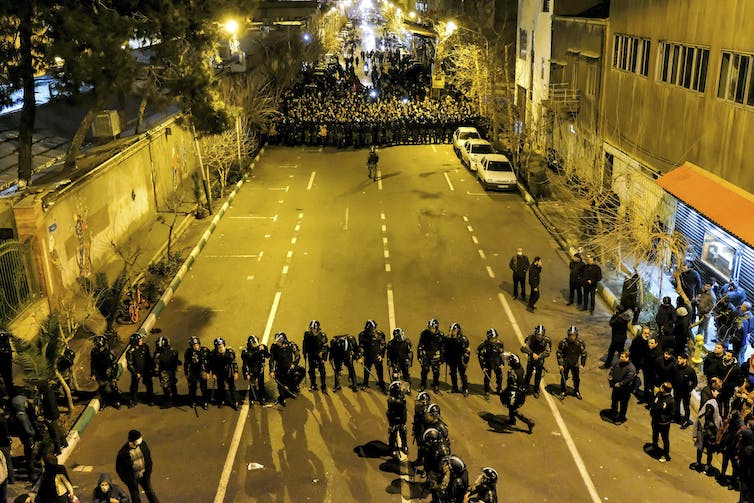 Police take a stand as demonstrators gather in front of Amir Kabir University in Tehran to mourn the victims of Flight PS752. Police fired both live ammunition and tear gas to disperse the protesters. AP Photo

In short, Soleimani’s death didn’t weld the country together. It is still grappling with structural problems that cannot be solved overnight without a real willingness to change. The gap between the regime and the people will only grow if current trends persist. Among these trends is an expected increase in anti-regime demonstrations.

Vahid Yücesoy, PhD Candidate in political science, Université de Montréal. This article is republished from The Conversation under a Creative Commons license. Read the original article. Be sure to sign up for Tag The Flag’s nonpartisan newsletter to have articles like this delivered directly to your inbox every weekday morning.