As China and some European countries slowly begin to reopen schools and shops that were closed because of the pandemic, the situation across the U.S. is still dire. Governors are seeking medical equipment and supplies from all corners – including private assistance and other countries.

As many as 10,000 National Guard members have also been activated by governors to help state efforts against the coronavirus pandemic. As scholars of military efforts in humanitarian and disaster responses around the world, we believe that the federal military could offer additional help.

Already, two U.S. Navy hospital ships have joined the coronavirus response. USNS Mercy went to Los Angeles, where some patients are being treated on board and 40 sailors are expected to help on shore at a local nursing home. USNS Comfort went to New York City, where it treated a number of patients and is presently preparing to relocate to other U.S. cities that may need help.

There are legal limits on what the armed forces can do on U.S. soil, and there aren’t unlimited personnel or supplies. But there is plenty the military could do to help protect public health, such as preparing areas that have not yet been hit hard, moving supplies to where they’re needed and providing personnel to do other important tasks – including direct patient care. 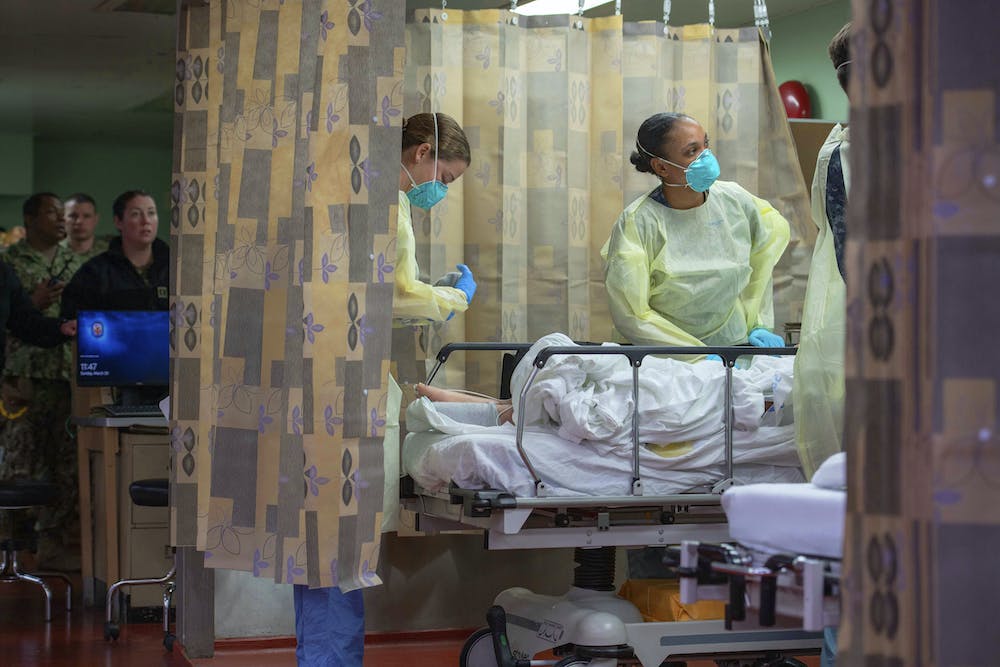 The U.S. military has a lot of experience in crisis response, particularly in other countries. Between 1970 and 2000, American troops provided international humanitarian assistance and disaster relief 366 times.

For instance, in the aftermath of super Typhoon Haiyan hitting the Philippines in 2013, more than 13,000 U.S. military personnel helped clear roads, delivered food and water, and airlifted thousands of people to safety. The USS George Washington Carrier Strike Group also helped with search and rescue operations and medical care.

The U.S. military also knows how to respond to an infectious disease outbreak. In 2014, troops went to Liberia to help deal with an Ebola outbreak there, building treatment and patient isolation spaces and helping keep supplies flowing. That included providing personal protective equipment and lab services. 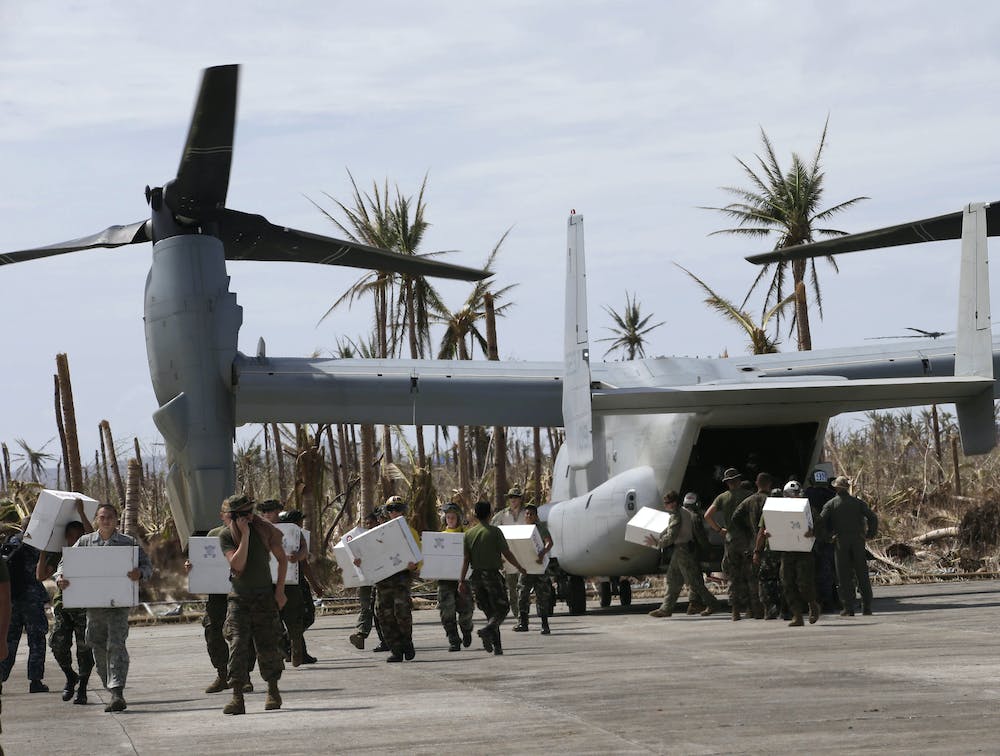 In 2013, U.S. troops brought humanitarian aid to the Philippines in the wake of super Typhoon Haiyan. AP Photo/Bullit Marquez

In general, the U.S. military does not conduct formal operations on American soil. The 1878 Posse Comitatus Act specifically bars the Army and, after a later amendment, the Air Force from carrying out law enforcement activities on U.S. territory. The law’s aim is to confine the military to foreign defense and effectively curb any meddling in domestic affairs.

Technically speaking, the Posse Comitatus Act does not apply to the Coast Guard, Navy or Marine Corps, and federal courts have generally agreed with that interpretation. However, Defense Department policy extends the ban on domestic operations to the Navy and the Marines.

Yet the U.S. military can help at home if ordered to do so by Congress, or when offering emergency aid and humanitarian assistance.

For instance, Congress has charged the Army Corps of Engineers with managing and regulating rivers, wetlands and other waterways around the country. The Army Corps of Engineers played a major role in draining floodwaters in New Orleans after Hurricane Katrina hit in 2005. So there is precedent for using the military to help in the effort against a massive disaster such as the coronavirus outbreak.

The military has enormous transport capability in ships, trucks and aircraft. Troops could deliver medical supplies, food or other material – and even patients. For instance, two physicians from Boston and Baltimore have suggested the military could airlift patients who don’t have COVID-19 out of New York City to other cities that have hospital space, leaving room for the flood of coronavirus patients.

Military doctors and nurses could bolster civilian capacity; military medical students at the Uniformed Services University are already receiving COVID-19 training as part of their coursework. Military field hospitals can be set up quickly. The military also has the equipment and staffing to help collect and transport dead bodies if needed. 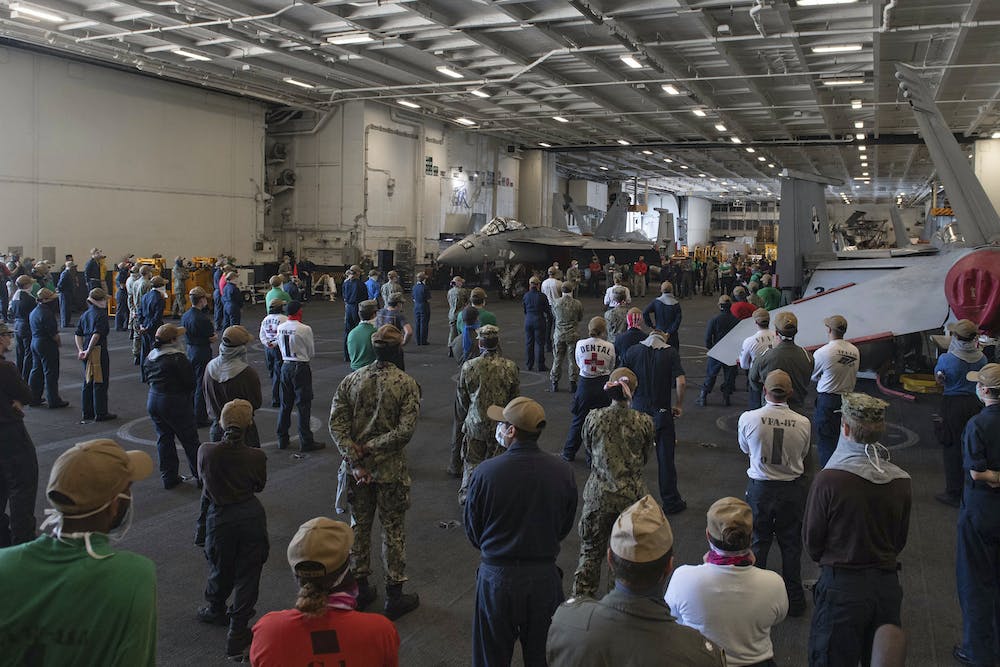 Crew of the aircraft carrier USS Theodore Roosevelt listen as Vice Adm. William Merz, commander of the U.S. 7th Fleet, answers questions during a visit to the ship at Naval Base Guam. Mass Communication Specialist Kaylianna Genier/U.S. Navy via AP

Some European countries have mobilized troops, sparking fears that as many as 20% of the personnel could catch the virus.

Similar concerns apply in the U.S. Four crew members of the USNS Comfort tested positive for the coronavirus but have recovered. The military is affected anyway: Even though the USS Theodore Roosevelt was not involved in virus response, the aircraft carrier’s crew has been devastated by the disease. The crew of a destroyer fighting drug trafficking off the coast of South America has also been hit.

But in our assessment, the benefits of using the military to respond to COVID-19 outweigh the risks. In addition to delivering much-needed medical care and humanitarian assistance to communities in need, the military would get even more experience dealing with pandemics and other public health crises. That would make the troops even more effective when serving overseas – and at home.