☕ Cover: Statue of Liberty at Sunset

Good Morning. Here’s what you need to know to start the day, along with perspective from both sides for calmer coffee conversations with your family, friends, colleagues, and co-workers. Plus, a bit of good news: A student and an opera singer unexpectedly came together for a national anthem duet.

Dream On: Yesterday the Supreme Court ruled that the Trump administration cannot immediately end the Deferred Action on Childhood Arrivals program. DACA, as it’s known, allows people brought to the United States as children to apply for a temporary status protecting them from deportation and permitting them to work. The status lasts for two years and is renewable, but it does not provide a path to citizenship. In a 5-4 decision, with Chief Justice John Roberts joining the liberal members to author the opinion, the Supreme Court said the Department of Homeland Security’s move to eliminate the program was done in an “arbitrary and capricious” manner although they did not rule on the merits of the program itself. Here is what each side is saying about the high court’s ruling:

On the right: Joel Pollack of Breitbart writes that, “Conservatives have long believed that DACA was unconstitutional, because it circumvented the legislature and applied the administration’s power of prosecutorial discretion to an absurdly large number of potential defendants (2 million).” To that end, in 2017, when Jeff Sessions was Attorney General, he declared DACA was “an unconstitutional exercise of authority by the Executive Branch.” This belief was transcribed by dissenting members of the Supreme Court including Justices Clarence Thomas, Samuel Alito, and Neil Gorsuch, who wrote yesterday that DACA was illegal from its inception. “Under the auspices of [the] decision, administrations can bind their successors by unlawfully adopting significant legal changes through Executive Branch agency memoranda,” Thomas wrote. Thursday’s decision did not sit well with President Trump who tweeted, “These horrible & politically charged decisions coming out of the Supreme Court are shotgun blasts into the face of people that are proud to call themselves Republicans or Conservatives. We need more Justices or we will lose our 2nd Amendment & everything else. Vote Trump 2020!”

On the Left: Elise Foley of the Huffington Post says Trump and Republicans’ argument that Obama overstepped his authority in creating DACA is hypocritical. Foley writes that, “like his predecessor, Trump has taken executive actions on immigration without congressional approval. Early in his presidency, Trump barred people from several Muslim-majority nations from entering the country [and in] April of this year, Trump issued another order limiting legal immigration, claiming that the coronavirus pandemic and related economic slowdown necessitated it.” More broadly, Foley points out that DACA “allowed [the recipients] to find better jobs, increase their earnings and get driver’s licenses. They pay taxes and buy homes. Some have children who are U.S. citizens. An estimated 29,000 DACA recipients are working in health care, some of them on the front lines of the coronavirus pandemic.” Ali Noorani states in a Fox News opinion piece that, “simply put, [the ruling] is great news for the United States.” Noorani ends with a question: “Will our elected officials heed the call of the 85 percent of Americans who favor allowing Dreamers to stay in the U.S. legally — including 73 percent of Republicans?”

Flag This: As Brent Kendall, Jess Bravin and Michelle Hackman point out for the Wall Street Journal, “The ruling hands President Trump one of the biggest legal defeats of his presidency, and in the middle of an election year in which immigration is again a top political topic.” Moreover, the opinion is the second time in a week the Supreme Court has ruled against the Trump administration, despite having two of President Donald Trump’s nominees. Monday, the court said LGBTQ Americans are protected under the Civil Rights Act. Zooming out, the ruling still leaves DACA recipients in limbo. Now Trump administration officials will have to provide a lower court with a more robust justification for ending the program. That process is likely to take months, delaying any movement on DACA until well after the November election.

Americans Skip Millions of Loan Payments
“Americans have skipped payments on more than 100 million student loans, auto loans and other forms of debt since the coronavirus hit the U.S., the latest sign of the toll the pandemic is taking on people’s finances,” AnnaMaria Andriotis reports for the Wall Street Journal. “The number of accounts that enrolled in deferment, forbearance or some other type of relief since March 1 and remain in such a state rose to 106 million at the end of May, triple the number at the end of April.”

Progressive Donor Group Launches Massive Vote-By-Mail Campaign
“A network of deep-pocketed progressive donors is launching a $59 million effort to encourage people of color to vote by mail in November, a step many Democrats view as crucial to turning out the party’s base during the coronavirus pandemic,” AP’s Brian Slodysko reports. What’s Happening: “A nonprofit arm of the donor network Way to Win is working with philanthropic organizations including the Ford Foundation and George Soros’ Open Society to raise the money.”

Digital Tax: The New Type of Trade War
“Europe and the United States are hurtling toward a trade war over who has the right to tax Google, Facebook and Amazon,” Mark Scott, Doug Palmer and Elisa Braun write for POLITICO. What’s Happening: “After Washington confirmed Wednesday that it had pulled out of talks on global rules for taxing the digital economy, officials including Bruno Le Maire, the French finance minister, and Paolo Gentiloni, the European economy commissioner, threw their weight behind national or EU-wide digital levies — plans that would likely bring retaliation from the U.S.”


Russia Prefers EU-Kosovo Mediation
“Russia’s foreign minister said Thursday that Moscow will need to approve any solution reached in peace talks between Kosovo and Serbia that have gained momentum after U.S. President Donald Trump’s envoy called for a summit between the two former wartime foes in the White House next week,” AP’s Dusan Stojanovic reports in Belgrade, Serbia. What’s Happening: “Sergey Lavrov, on his first visit outside Russia after the coronavirus outbreak, said that the European Union has the mandate to negotiate in the dispute between Kosovo and Serbia, suggesting that Moscow doesn’t back a meeting later this month called by Washington.”

Movie Theatres Reopen in Texas
Cinemark will reopen theatres in Texas today, showcasing classic movies like Ghostbusters, Goonies, and Jurassic Park for a discounted admission price of $5. The third-largest movie theater operator in the US is aiming to reopen the rest of its 555 cinemas by July 17.

Fauci: Football needs ‘bubble’ format to play in 2020
Dr. Anthony Fauci says football teams would need to emulate plans by the NBA and MLS for a “bubble” format or consider not playing in 2020 because of the coronavirus pandemic.

Voice Tweets
Twitter unveiled a new feature that will allow users to record their tweets as brief audio clips and then post them directly into their feed. Voice tweets, as they’re called, are limited to 140 seconds and will be rolled out over the coming weeks. 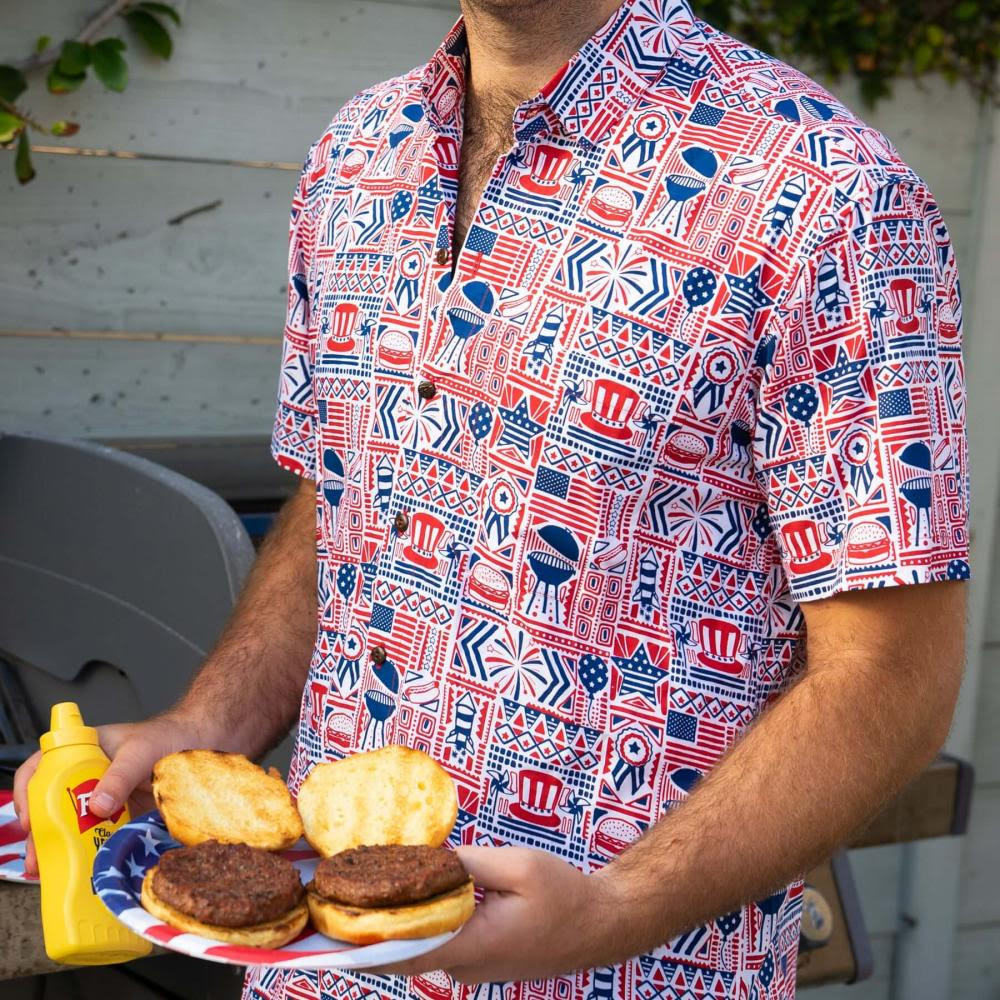 Fire up the grill. Add the seasoning. This American flag Hawaiian shirt is perfect for your backyard barbecues, upcoming beach days and any time you choose to celebrate your freedom. You can expect the same breezy, island comfort, the same tropical state of mind you’ve come to love in Kenny Flowers shirts. Only difference is – this one is all-American – covered in red, white and blue, and likely a little yellow mustard after your hot dogs this weekend. Click here to snag one before July 4th.

In what is now known as Juneteenth, on June 19, 1865, Union soldiers arrive in Galveston, Texas with news that the Civil War is over and slavery in the United States is abolished.

The Dystopian Lake Filled by the World’s Tech Lust: Hidden in an unknown corner of Inner Mongolia is a toxic, nightmarish lake created by our thirst for smartphones, consumer gadgets and green tech, discovers Tim Maughan. BBC Future · 8 min

How Giving Up TV For A Month Changed My Brain And My Life: Watching a couple hours of TV a day can have major effects on your brain. So what would happen if you quit cold turkey? Fast Company · 5 min

Question: Why is rural America more vulnerable to COVID-19 than cities? Answer below…