Police work to keep demonstrators back during a protest in Lafayette Square Park on May 30, 2020 in Washington, D.C. Tasos Katopodis/Getty Images

As protests against police violence and racism continue in cities throughout the U.S., the public is learning that several of the officers involved in the killing of George Floyd in Minneapolis and Breonna Taylor in Louisville share a history of complaints by citizens of brutality or misconduct.

Decades of research on police shootings and brutality reveal that officers with a history of shooting civilians, for example, are much more likely to do so in the future compared to other officers.

A similar pattern holds for misconduct complaints. Officers who are the subject of previous civilian complaints – regardless of whether those complaints are for excessive force, verbal abuse or unlawful searches – pose a higher risk of engaging in serious misconduct in the future.

A study published in the American Economic Journal reviewed 50,000 allegations of officer misconduct in Chicago and found that officers with extensive complaint histories were disproportionately more likely to be named subjects in civil rights lawsuits with extensive claims and large settlement payouts.

In spite of this research, many law enforcement agencies not only fail to adequately investigate misconduct allegations, they rarely sustain citizen complaints. Disciplinary sanctions are few and reserved for the most egregious cases.

Protesters went to the home of the Minneapolis police officer, Derek Chauvin, who is now charged with George Floyd’s death.

Derek Chauvin, the ex-officer who has been charged with third-degree murder and second-degree manslaughter for killing Floyd, is no stranger to situations in which deadly force has been deployed.

During a 2006 roadside stop, Chauvin was among six officers who, in just four seconds, fired 43 rounds into a truck driven by a man wanted for questioning in a domestic assault. The man, Wayne Reyes, who police said aimed a sawed-off shotgun at them, died at the scene. The police department never acknowledged which officers had fired their guns and a grand jury convened by prosecutors did not indict any of the officers.

Chauvin is also the subject of at least 18 separate misconduct complaints and was involved in two additional shooting incidents. According to The Associated Press, 16 of the complaints were “closed with no discipline” and two letters of reprimand were issued for Chauvin related to the other cases.

Tou Thao, one of three Minneapolis officers at the scene as Floyd pleaded for his life, is named in a 2017 civil rights lawsuit against the department. Lamar Ferguson, the plaintiff, said he was walking home with his pregnant girlfriend when Thao and another officer stopped him without cause, handcuffed him and proceeded to kick, punch and knee him with such force that his teeth shattered.

The case was settled by the city for US$25,000, with the officers and the city declaring no liability, but it is not known if Thao was disciplined by the department.

In Louisville, Kentucky, at least three of the officers involved in the shooting death of Breonna Taylor while serving a no-knock warrant at her home – allowing them to use a battering ram to open her door – had previously been sanctioned for violating department policies.

One of the officers, Brett Hankison, is the subject of an ongoing lawsuit alleging, according to news reports, harassing suspects and planting drugs on them. He has denied the charges in a response to the lawsuit.

Another officer in the Taylor case, Myles Cosgrove, was sued for excessive force in 2006 by a man whom he shot seven times in the course of a routine traffic stop. The judge dismissed the case. Cosgrove had been put on paid administrative leave as his role in the shooting was investigated by his department, and returned to the department after the investigation closed. 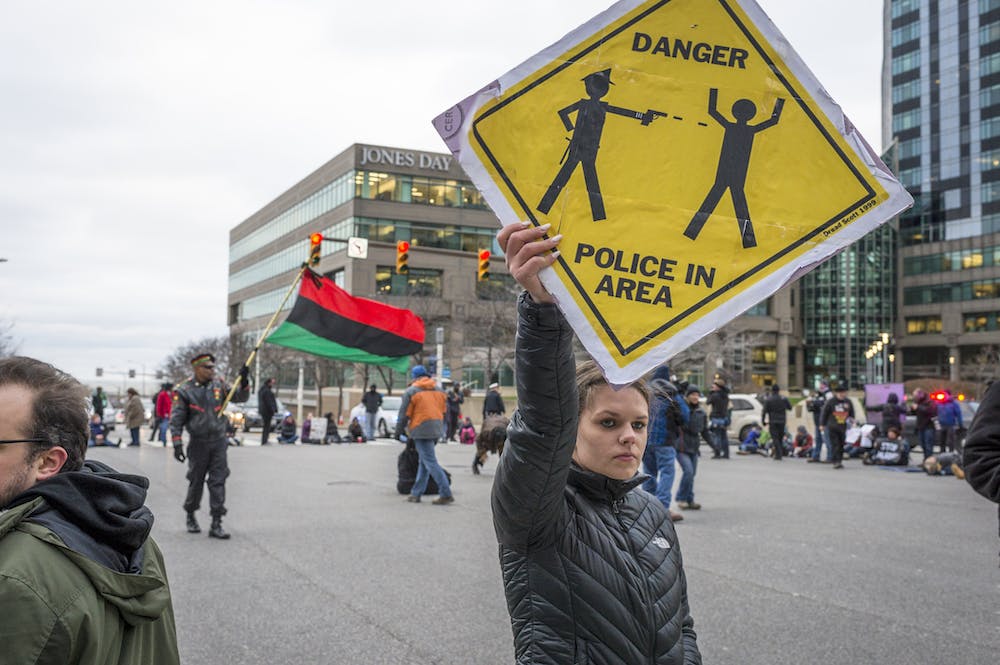 Protesters took to the street the day after a grand jury declined to indict Cleveland Police Officer Timothy Loehmann for the fatal shooting of 12-year-old Tamir Rice in November 2014. Angelo Merendino/Getty Images

Patterns of misconduct and abuse

I am a scholar of law and the criminal justice system. In my work on wrongful conviction cases in Philadelphia, I regularly encounter patterns of police misconduct including witness intimidation, evidence tampering and coercion. It is often the same officers engaging in the same kinds of misconduct and abuse across multiple cases.

The Bureau of Justice Statistics reports that across the nation fewer than one in 12 complaints of police misconduct result in any kind of disciplinary action.

And then there is the problem of “gypsy cops” – a derogatory ethnic slur used in law enforcement circles to refer to officers who are fired for serious misconduct from one department only to be rehired by another one.

In the largest study of police hiring, researchers concluded that rehired officers, who make up roughly 3% of the police force, present a serious threat to communities because of their propensity to re-offend, if they had engaged in misconduct before.

These officers, wrote the study’s authors, “are more likely … to be fired from their next job or to receive a complaint for a ‘moral character violation.’”

The Obama administration’s Task Force on 21st Century Policing recommended the creation of a national database to identify officers whose law enforcement licenses were revoked due to misconduct. The database that currently exists, the National Decertification Index, is limited, given state level variation in reporting requirements and decertification processes.

Analysts agree that this is a useful step, but it does not address underlying organizational and institutional sources of violence, discrimination and misconduct.

For example, in the aftermath of the police shooting of Michael Brown in Ferguson, Missouri, the Department of Justice found that the department had a lengthy history of excessive force, unconstitutional stop and searches, racial discrimination and racial bias.

The report noted that the use of force was often punitive and retaliatory and that “the overwhelming majority of force – almost 90% – is used against African Americans.”

One promising solution might be the creation of independent civilian review boards that are able to conduct their own investigations and impose disciplinary measures.

In Newark, New Jersey, the board can issue subpoenas, hold hearings and investigate misconduct.

But historically, the work of civilian review boards has been undercut by limitations on resources and authority. Promising models, including the one in Newark, are frequently the target of lawsuits and harassment by police unions, who say that such boards undermine the police department’s internal disciplinary procedures.

In the case of civilian review board in the Newark, the board largely prevailed in the aftermath of the police union lawsuit. The court ruling restored the board’s ability to investigate police misconduct – but it made the board’s disciplinary recommendations nonbinding.

Jill McCorkel, Professor of Sociology and Criminology, Villanova University. This article is republished from The Conversation under a Creative Commons license. Read the original article.