🌎 Welcome to our Geopolitics feed where we Tag Flags from all over the world and highlight key takeaways. 📭 Sign up to our nonpartisan newsletter to have these stories delivered directly to your inbox every morning. 📷 Cover: Protests in Santiago, Chile continued as 2019 drew to a close. Elvis Gonzales/EPA

The first two decades of the 21st century saw the return of mass movements to streets around the world. Partly a product of sinking confidence in mainstream politics, mass mobilisation has had a huge impact on both official politics and wider society, and protest has become the form of political expression to which millions of people turn.

2019 has ended with protests on a global scale, most notably in Latin America, the Middle East and North Africa, Hong Kong and across India, which has recently flared up against Prime Minister Narendra Modi’s Citizenship Amendment Act. In some cases protests are explicitly against neoliberal reforms, or against legal changes that threaten civil liberties. In others they are against inaction over the climate crisis, now driven by a generation of young people new to politics in dozens of countries.

As we end a turbulent two decades of protest – the subject of much of my own teaching and ongoing research – what will be the shape of protest in the 2020s?

Read more: School climate strikes: what next for the latest generation of activists?

What’s changed in the 21st century

Following moments of open class warfare in the late 1960s and early 1970s, battles against the political and economic order became fragmented, trade unions were attacked, the legacy of the anti-colonial struggles was eroded and the history of the period was recast by the establishment to undermine its potency. In the post-Cold War era, a new phase of protest finally began to overcome these defeats.

This revival of protest exploded onto the political scene most visibly in Seattle outside the World Trade Organization summit in 1999. If 1968 was one of the high points of radical struggle in the 20th century, protest in the early 2000s once again began to reflect a general critique of the capitalist system, with solidarity forged across different sections of society. 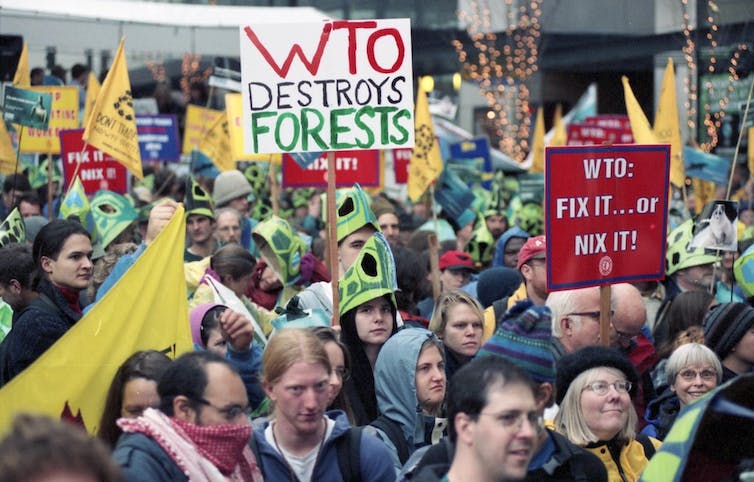 The birth of the anti-globalisation movement in Seattle was followed by extraordinary mobilisations outside gatherings of the global economic elite. Alternative spaces were also created for the global justice movement to connect, most notably the World Social Forums (WSFs), starting with Porto Alegre, Brazil in 2001. It was here that questions over what position the anti-globalisation movement should take over the Iraq War, for example, were discussed and debated. Though the WSFs provided an important rallying point for a time, they ultimately evaded politics.

The global anti-war movement led to the biggest co-ordinated demonstrations in the history of protest on February 15 2003, in which millions of people demonstrated in over 800 cities, creating a crisis of democracy around the US and UK-led intervention in Iraq.

In the years leading up to and following the banking crisis of 2008, food riots and anti-austerity protests escalated around the world. In parts of the Middle East and North Africa, protests achieved insurrectionary proportions, with the overthrow of one dictator after another. After the Arab Spring was thwarted by counter-revolution, the Occupy movement and then Black Lives Matter gained global attention. While the public, urban square became a central focus for protest, social media became an important – but by no means exclusive – organising tool.

To varying degrees, these movements sharply raised the question of political transformation but didn’t find new ways of institutionalising popular power. The result was that in a number of situations, protest movements fell back on widely distrusted parliamentary processes to try and pursue their political aims. The results of this parliamentary turn have not been impressive.

On the one hand, the first two decades of the 21st century have seen soaring inequality, accompanied by debt and the neglect of working people. On the other, there have been poor results from purely parliamentary attempts to challenge it. There is, in other words, a deep crisis of representation.

The inability of modern capitalism to deliver more than survival for many has combined with a general critique of neoliberal capitalism to create a situation in which wider and wider sections of society are being drawn into protest. More than a million people have poured onto the streets of Lebanon since mid-October and protests continue despite a violent crackdown by security forces.

At the same time, people are less and less willing to accept unrepresentative politicians – and this is likely to continue in the future. From Lebanon and Iraq to Chile and Hong Kong, mass mobilisations continue despite resignations and concessions.

In Britain, the Labour Party’s defeat in the recent general election is attributed largely to its failure to accept the 2016 referendum result over EU membership. Decades of loyalty to the Labour Party for many and a socialist leader in Jeremy Corbyn calling for an end to austerity couldn’t cut through to enough of the millions who voted for Brexit.

In France, a general strike in December 2019 over President Emmanuel Macron’s proposed pension reforms has revealed the extent of opposition that people feel towards his government. This comes barely a year after the start of the Yellow Vest movement, in which people have protested against fuel price hikes and the precariousness of their lives.

The tendency towards street protest will be encouraged too by the climate crisis, whose effects mean that the most heavily exploited, including along race and gender lines, have the most to lose. When the protests in Lebanon broke out, they were taking place alongside rampant wildfires.

As protesters gain experience, they consciously bring to the fore questions of leadership and organisation. In Lebanon and Iraq there has already been a conscious effort to overcome traditional sectarian divides. Debates are also raging in protest movements from Algeria to Chile about how to fuse economic and political demands in a more strategic manner. The goal is to make political and economic demands inseparable, such that it’s impossible for a government to make political concessions without making economic ones too.

Read more: The future of protest is high tech – just look at the Catalan independence movement.

There has also been a resurgence of the far right in many countries, emboldened most visibly by parties and politicians in the US, Brazil, India and many parts of Europe. This resurgence, however, has not gone unchallenged.

The convergence of crisis on these multiple fronts will reach breaking point, creating conditions that will become intolerable for most people. This will galvanise more protest and more polarisation. As governments respond with reforms, such measures on their own will be unlikely to meet the combination of political and economic demands. The question of how to create new vehicles of representation to assert popular control over the economy will keep emerging. The fortunes of popular protest may well depend on whether the collective leadership of the movements can provide answers to it.

Feyzi Ismail, Senior Teaching Fellow, SOAS, University of London. This article is republished from The Conversation under a Creative Commons license. Read the original article.