🌎 Welcome to our Geopolitics feed where we Tag Flags from all over the world and highlight key takeaways. 📭 Sign up to our nonpartisan newsletter to have these stories delivered directly to your inbox every morning. 📷 Cover: Duterte (left) with the Philippines’ armed forces chief of staff, Lieutenant General Noel Clement. Rolex Dela Pena/EPA

The president of the Philippines, Rodrigo Duterte, decided to terminate a prominent and unpopular military agreement with the US in early February. The move came as a direct response to Washington’s invocation of the American Magnitsky Act, which gives the US government the power to impose visa and financial sanctions on human rights abusers around the world.

But Duterte is using it as a pretext to push the Philippines, which is battling an ongoing series of insurgencies, closer to China.

Duterte’s “drug war” has killed over 20,000 people (nobody knows the true extent). In January, the US triggered the Magnitsky Act over the violence. The US then denied a US visa and froze the assets of Senator Ronald “Bato” Dela Rosa, a close ally of Duterte who is now the National Police Chief and figurehead of the war on drugs.

After a month of procrastinating, Duterte followed through on his threat to terminate the Visiting Forces Agreement (VFA), which allows US military personnel and equipment to move through the Philippines and is the basis of a deeply entrenched military alliance between the two countries. There are some 300 US-Philippines joint exercises each year and the Philippines remains a key strategic ally for the US.

Read more: Duterte’s Obama insult was shameful – but the West has turned a blind eye to much, much worse

So far so tit-for-tat. But Duterte, a proud America-basher, knows there will be plenty who support withdrawing from the VFA.

The VFA has been a symbol of American imperialism in the Philippines since its inception in 1998. It was one of the few issues that united liberals and nationalists, who argued that it was unconstitutional and point to incidents of US Marines using the VFA to try and avoid Filipino justice – most notoriously in the case of the 2014 murder of Filipino trans woman Jennifer Laude.

Liberals have argued forcefully that the country was in an unbalanced, if not abusive, relationship with the US. But it has taken an authoritarian president and a ruthless campaign of extrajudicial killings to enact any re-balance. If that doesn’t quell celebrations in the Philippines and elsewhere at the termination of the VFA, then thinking through the possible fallout and its implications for the country and wider region will.

The US president, Donald Trump, shrugged off the Philippines’ decision. There are still other Philippine-US military agreements in place: the more comprehensive 2014 Enhanced Defense Cooperation Agreement (EDCA) is already being targeted for termination too, according to Duterte’s spokesman.

Besides this, the US still has a separate mutual defence pact with its former colony and assists internally as well as externally in security operations. The US has played a key role in counter-terror and counter-insurgency campaigns in the Philippines since 9/11.

Focusing on Islamist rather than communist groups, US training, intelligence and surveillance has been a constant presence for the past two decades, if not very successful. Violence proliferates from a variety of ever-evolving militant groups and US assistance if not insistence on offensive operations has a patchy record.

When the US helped the army end its five-month siege of Marawi city in 2017, not only did it fail to prevent the destruction of the city. It oversaw what Amnesty International alleged were violations of international humanitarian and human rights law.

What value the US is bringing to the battle with Islamist militancy certainly deserves scrutiny. But the prospect of less Western oversight and training for the Philippines in this complex and often exoticised conflict is also concerning.

Read more: Panic about IS in the Philippines masks a very real war in the country

The Philippines sought redress at the International Court of Arbitration over territorial claims against the Chinese, and won. China was found to be in breach of international law in 2016, but Duterte has since tried to entirely ignore the dispute, which was launched by a predecessor, as he is keen to push back against US influence and inclined to build closer relations with China. He is unwilling to be a pawn in the tussle between Washington and Beijing and openly courted closer Russian and Chinese relations. 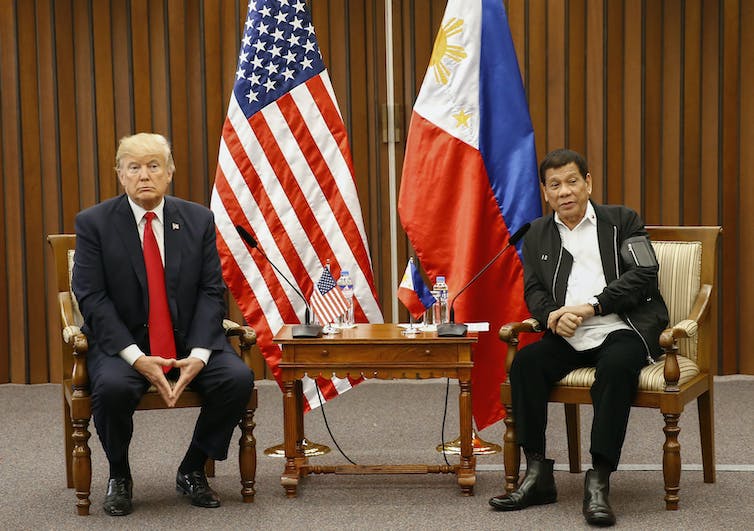 Uncomfortable allies: Trump and Duterte at a regional summit in Manila in 2017. Rolex Dela Pena/EPA

Can China fill the US void?

Senior US and Filipino military officials are unhappy with the VFA termination. While the US blames Duterte and insists the US is doing the right thing in terms of human rights, the move pits Duterte against his own military. They think he’s potentially taken away their support and that he’s cow-towing to Beijing.

Yet Duterte, who openly admits to the “militarisation of government” has politicised his military. The military is bonded to him through its role in the war on drugs and by numerous political appointments of military figures to government.

The Americans have more options, large bases in stable nations including Japan and South Korea and other allies across Southeast Asia. While Filipinos have already suffered under Duterte, with two years left of his tenure the Americans may take a leaf out of the Chinese playbook by playing the long game and waiting out Duterte in favour of a new administration willing to stand up to China.

Tom Smith, Principal Lecturer in International Relations, University of Portsmouth. This article is republished from The Conversation under a Creative Commons license. Read the original article. Be sure to sign up for Tag The Flag’s nonpartisan newsletter to have articles like this delivered directly to your inbox every weekday morning.