A flag is more than a decorative piece of cloth; it’s a symbol that represents values, ideals, a way of life and most importantly, all of those who served in its honor. Two retired Army veterans who met in Virginia after their service are testaments to that special tradition and reverence for the Stars and Stripes.

The story goes like this. One day, while the house next to his was being renovated, Army veteran Lane Richardson of Ferrum, Virginia found an American flag in a pile of rags on the floor. The owner of the house at the time gladly gave the deteriorated flag to Richardson, who undertook its restoration. As he worked to return the flag to its glory, he found that it had only 48 stars. He realized this was the banner that flew over our country for 47 years, representing the US before Alaska and Hawaii became states in 1959. Veterans from both World Wars fought under the 48 stars around the globe.

Fast forward to a few years later when Terry Michel, a retired Command Sergeant Major in the Army and his wife, Rhonda decided to settle in the Blue Ridge Mountains. Ultimately, they moved into the house where Richardson found the 48-star flag. Seeing as how it was right next door to Richardson, the two veterans soon became friends. Whenever Terry visited his neighbor he always admired the vintage Stars and Stripes.

“Every time I visited Lane at his home, I was drawn to the flag hanging in its place of honor among Lane’s memorabilia,” Terry said. “I even brought friends and relatives over to show it off.”

It was only a couple of months after the Michel’s move to Ferrum, that Lane told Terry to take it down and bring it back to the now renovated house the Michel’s were living in.

“He gave it to me that day,” Terry said. Apparently, Richardson felt that its rightful place would be back in Michel’s home, even if they will never know exactly how that 48-star flag came to be on the floor as a forgotten rag. 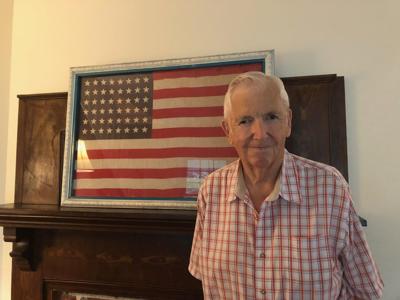 Credit: The Franklin News Post – Lane Richardson, 88, of Ferrum and a Korean War veteran, stands with a 48 star flag that was most likely discovered in the wall on the second story above the fireplace.

Today, Terry and Rhonda consider this treasured keepsake an honored addition to their home as a testament to their own service, but also to that of both their families who served in the military.

And, certainly, of Lane Richardson, who proudly repaired the threads of this particular flag, displaying the ultimate respect to those who served under it.

“It means a lot to me. As a veteran, I understand its value and what it means to all of us,” Michel said. Rhonda added, “This flag is not just for today. It’s our life. We’ve lived and breathed under it for years. It holds a place of honor in our home and it always will.”

To both the Richardson’s and the Michel’s, we salute you for your service and dedication to the colors that represent the United States of America.