Apollo 12 was the first mission to make a precise pinpoint landing on the Moon – and without the aid of computers or GPS.

When Apollo 11 landed on the Moon, it was a giant leap for mankind and a huge success for American engineering, but there was one aspect of the mission that hadn’t really gone as planned. When Neil Armstrong manually guided the lunar module to a safe touchdown, he had to override the computer which had the craft landing in a field of boulders. It left the demonstration of precision automated guidance to Apollo 12. 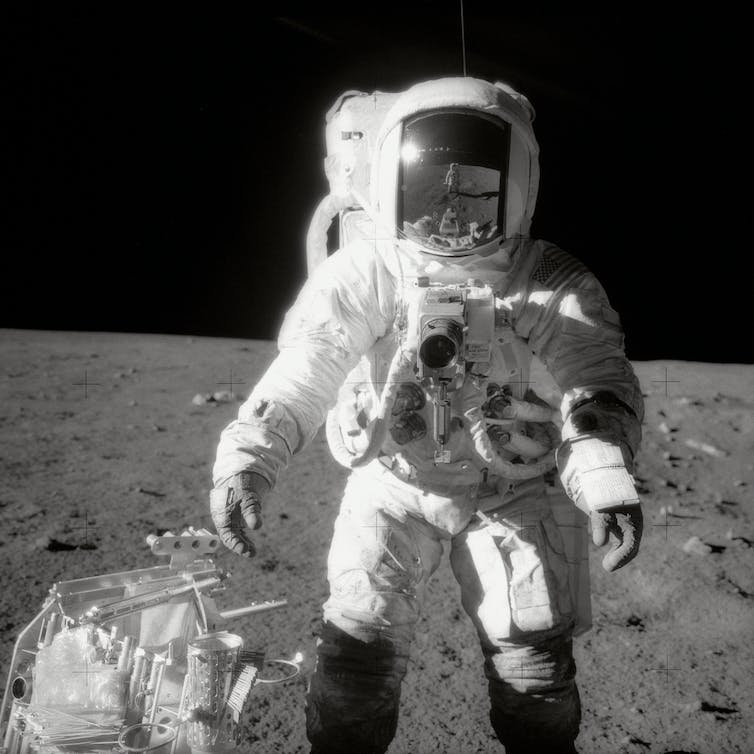 Fifty years ago this month, Apollo 12 successfully landed within a few hundred meters of its target, 400,000 kilometers (248,500 miles) away from where it lifted off. A key figure responsible for that precision landing was an unassuming Englishman living in the Arizona desert, Ewen Whitaker. Without the aid of computers or GPS, but with patience and an exhaustive knowledge of the geography of the Moon, Whitaker pinpointed where a robotic spacecraft had landed two years earlier.

As a scientist interested in the chronology of events on the Moon, I ultimately found myself analyzing rocks that had been brought back from the Moon by Apollo 12, working in a laboratory that Whitaker had helped establish. And even though Whitaker retired within months of my arrival in Tucson, it was a delight to get to know him and learn the stories of his quiet heroics.

The genesis of a lunar expert

Whitaker had long been fascinated by the Moon, and when pioneering planetary scientist Gerard Kuiper put out a request for collaborators at an international astronomical gathering in Dublin in 1956, Whitaker was the only one who responded. He went to join Kuiper at Yerkes Observatory in Wisconsin, then accompanied the group when it relocated to the University of Arizona and founded the Lunar and Planetary Laboratory.

As the group produced progressively better images and maps of the Moon, Whitaker absorbed the details with a devotion that meant that he almost certainly knew more lunar geography than any human ever had.

When NASA’s Surveyor 1 became the first robotic spacecraft to perform a soft landing on the Moon, in 1966, Whitaker wasn’t officially part of the team. But when the team studied the images from Surveyor 1’s camera, and published the location where they thought they had landed, Whitaker disagreed. When he examined the images of the peaks and craters and compared them to the highest-resolution images of the Moon’s surface available, he concluded the spacecraft was actually a few kilometers away from the published location. The team agreed.

After Apollo 11’s hair-raising final seconds before touchdown, precision landing became a high priority for Apollo 12. But the challenge was to establish the exact location of anything on a body that humans were just beginning to explore. A subsequent Surveyor mission provided the images Whitaker needed. 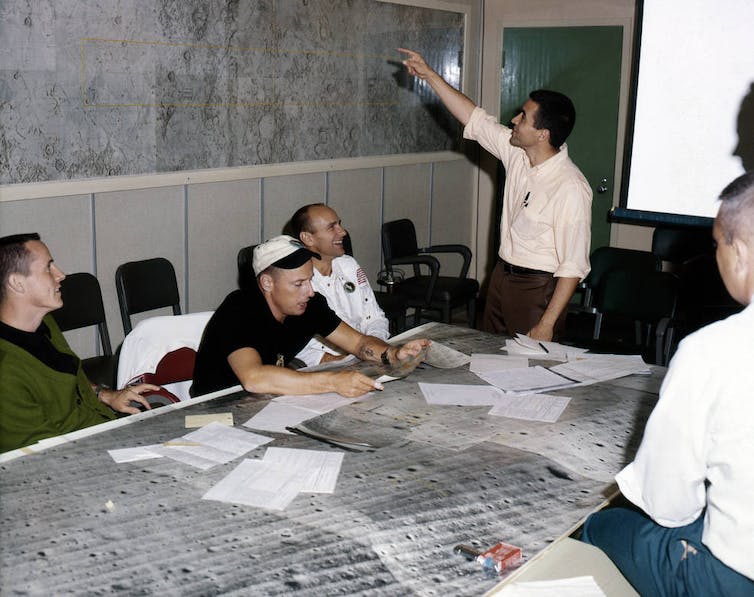 NASA had landed the Surveyor 3 unmanned craft in 1967, and the location had several advantages for an Apollo 12 landing site. It was clearly an area where a spacecraft could safely land; it was near the equator, which made it easily accessible. And, if the landing was close enough to Surveyor 3, the astronauts could walk over and remove pieces of it to bring back to Earth. That way, scientists could study the wear and tear on the materials after spending two years on the lunar surface, exposed to vacuum, extreme temperatures, ionizing radiation and micrometeorite bombardment.

Given Whitaker’s success with locating Surveyor 1, he was asked to locate precisely Surveyor 3. It was a tougher task than finding Surveyor 1. Because Surveyor 3 had landed in a crater, the view was restricted, but Whitaker again poured over the best images he could find, and believed he had found the landing site.

Apollo 12 launched on November 14, 1969, and, other than being struck by lightning twice within the first minute after it lifted off, had an uneventful trip to the Moon. On November 19, the landing module, Intrepid, headed into a crater and safely touched down. When Mission Commander Pete Conrad stepped out onto the lunar surface, he saw Surveyor 3, about 200 meters away. Ewen Whitaker had gotten it right.

Conrad and fellow astronaut Alan Bean walked to the unmanned spacecraft, and some of the iconic images from the mission are of Conrad working on the Surveyor craft, including taking off its camera, which was returned to Earth for analysis. 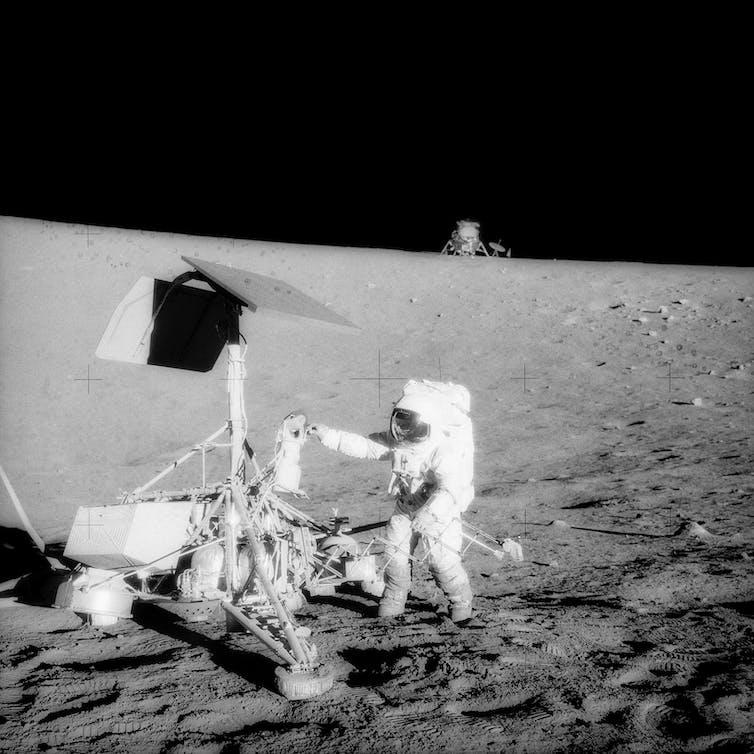 Astronaut Pete Conrad examines the camera on Surveyor 3, with the Apollo 12 spacecraft in the background. NASA

One of the ironies of that set of images is that the photographer, Bean, later became a very successful painter, with many of his paintings reflecting his lunar experiences, including the visit to Surveyor 3. Meanwhile, the astronauts sent a personal note to Whitaker, thanking him for his contributions, and that became one of Ewen’s prized possessions, framed and hanging on the wall of his house.

But the story of Whitaker and Bean wasn’t quite over. In the late 1990s, Bean was displaying artwork at a gallery in Tucson, and Whitaker went to see if he could meet him. Jim Scotti, an astronomer (in the Lunar and Planetary Lab) and space artist who knew both Whitaker and Bean, was at the meeting, and said that it seemed more like a reunion than a first meeting, with a happy mix of Whitaker’s English accent and Bean’s Texas twang.

And why not? For each of them, that day in November of 1969 had been the highlight of their professional careers, and neither could have done it without the other.

Timothy Swindle, Professor of Planetary Sciences and Geosciences, University of Arizona. This article is republished from The Conversation under a Creative Commons license. Read the original article. Be sure to sign up for Tag The Flag’s nonpartisan newsletter to have articles like this delivered directly to your inbox every weekday morning.

Corrections:  A photo caption on this article has been corrected to properly identify Edward Gibson.