Cover Photo: Bobby Fischer in Amsterdam in 1972, on a visit to discuss the World Chess Championship details with the then FIDE president Max Euwe

“When I won the world championship, in 1972, the United States had an image of, you know, a football country, a baseball country, but nobody thought of it as an intellectual country.” – Bobby Fischer

Bobby Fischer changed the face of international chess with a series of firsts beginning in 1957, putting to rest his belief that the US was not a contender in intellectual “sports”. He learned how to play at age 6, following his parents’ divorce, and by all accounts “lost himself in the game” for many years after.

This is illustrated by his dedication to improving his game even at a young age. Fischer would practice at the Manhattan Chess Club and the Brooklyn Chess Club until age 14, where he then won the 1957 US Chess Championship held in New York City. It was his inaugural appearance at that tournament and he competed against 13 of the strongest masters and grandmasters in the US at that time. He won it by a full point over seven-time former American champion, Samuel Reshevsky. 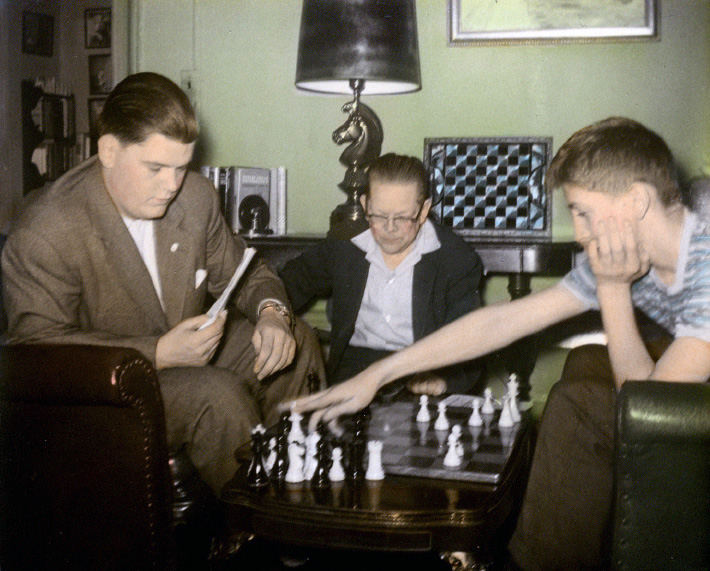 One year later, at age 15, he became the youngest chess grandmaster in history by winning in Portoroz, Yugoslavia. His style of play has been described as “aggressive” and highly competitive, traits that served him well against his opponents, along with his attitude that “chess is life.” In fact, even though Bobby Fischer’s IQ has been reported to be as high as 187, he dropped out of high school at age 16 in order to dedicate his time solely to playing the game.

In 1958 he began a winning streak of the first of eight American championships, also racking up a perfect score at the 1964 tournament by winning all of his games. In world championship play during 1970-71, Fischer won twenty consecutive games and eventually won the tournament after one loss and three draws against the former champion, Tigran Petrosyan, of the Soviet Union.

At age 23, he was the co-author of a book entitled Bobby Fischer Teaches Chess which outlines how to play for even the most beginning players. His forward in the book states that his goal is to analyze chess problems and also to teach the player common themes in chess that can help determine moves fairly quickly.

With that said, there was much more to this particular championship than moves on a chessboard. The game was often considered a suitable metaphor for the political climate during the Cold War era between the US and Russia. Opinionated and often arrogant in his attitudes and speech, Fischer summed it up when he described the match as “really the free world against the lying, cheating, hypocritical Russians … They always suggest that the world’s leaders should fight it out hand to hand. And that is the kind of thing we are doing.”

Also, the subject of one of several movies about Fischer, the match and Fischer’s style of play is depicted in the Bobby Fischer movie, Pawn Sacrifice. Viewers learn about his extreme paranoia about the Russians as well as his demands for more money and TV rights, demands that kept him away from the opening ceremonies. 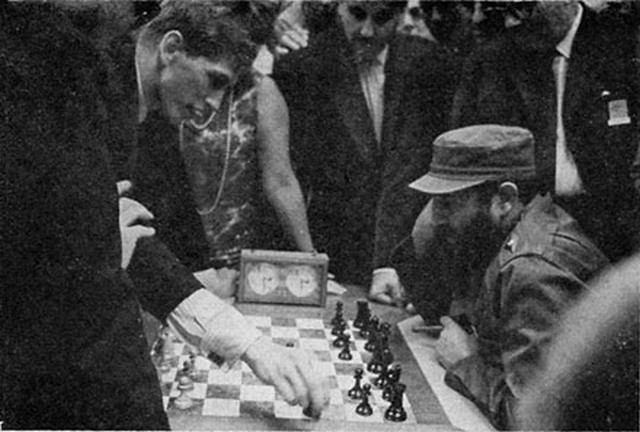 Eventually, the pot was sweetened by British millionaire, Jim Slater, who said, “Fischer is known to be graceless, rude, possibly insane. I really don’t worry about that, because I didn’t do it for that reason. I did it because he was going to challenge the Russian supremacy, and it was good for chess.” Henry Kissinger, US national security assistant for President Nixon at the time, also contacted Fischer requesting that Fischer play in order to “beat the Russians.”

The match went on, even though Fischer lost the first game in a dispute over TV cameras and forfeited the second game due to other demands. However, after 21 contentious games, Spassky resigned play, and Fischer was named World Chess Champion.  It is interesting to note that Fischer won $156,250 in prize money and Soviet grandmaster Spassky earned $93,750. For context, the prize in 2018 was $1 million.

It is at this point in Fischer’s life that his paranoia, arrogance, and often bizarre behavior brought him more attention than his superiority in chess, as shown in Bobby Fischer Against the World – his documentary. He made a continuing series of anti-Semitic comments (even though his mother was Jewish), became associated with a nontraditional church, and was homeless at one point. 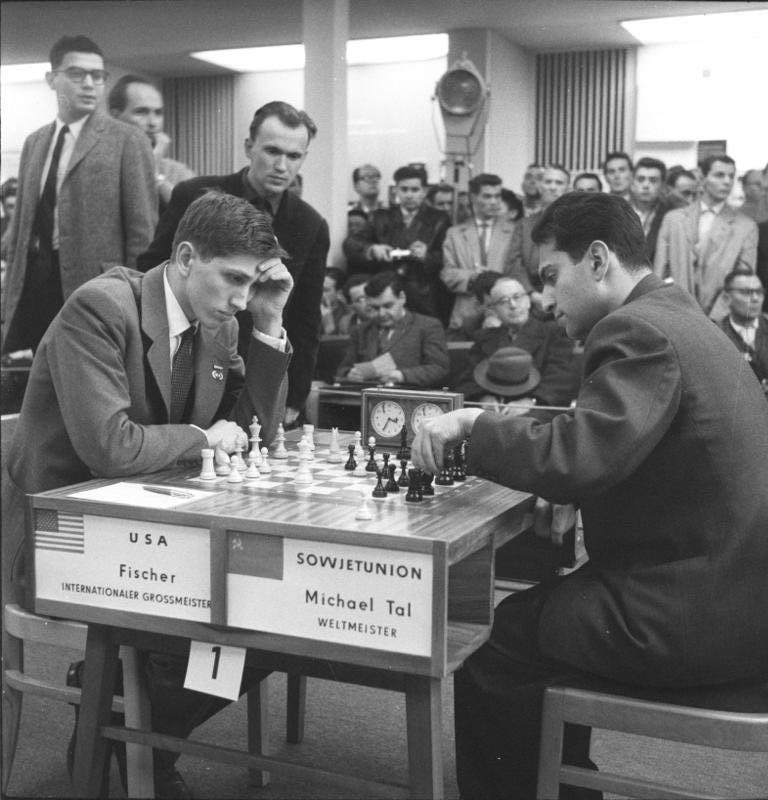 After refusing to defend his title he lost it against Soviet, Anatoly Karpov in 1975. For the next 20 years, he did not play the game that had captured his attention and his life. It wasn’t until 1992 that he returned to play a match against Spassky in Yugoslavia, a match that he won.

His reputation at his game, however, hasn’t faded over the years. Current World Chess Champion, Sven Magnus Øen Carlsen, responded that he would like to complete against Fischer in a Bobby Fischer vs. Magnus match over any other player in history. Magnus stated: “Probably Bobby Fischer at his best. Because the precision and energy that he played with is just unmatched in the history of chess. So Bobby Fischer from 1970 to 1972.”

After the match in Yugoslavia, US officials indicted him for attending the match in that country due to sanctions in place at that time. He lived abroad from that point on, and eventually gained citizenship in Iceland in 2005 remaining there until his death from kidney failure on January 17, 2008.

Be sure to sign up for our nonpartisan newsletter to have stories like this delivered to your inbox every morning.