Collective trauma: A boy walks among some of the 3,000 flags placed in memory of the lives lost in the September 11, 2001 terrorist attacks. Jim Young/Reuters

The Sept. 11, 2001 terrorist attacks were the worst acts of terrorism on American soil to date. Designed to instill panic and fear, the attacks were unprecedented in terms of their scope, magnitude and impact on the American psyche.

The vast majority (over 60 percent) of Americans watched these attacks occur live on television or saw them replayed over and over again in the days, weeks and years following the attacks.

As we reflect on the anniversary of this tragic event, a question to consider is: How has this event impacted those individuals who are too young to remember a world before 9/11?

As an applied social psychologist, I study responses to natural and human-caused adversities that impact large segments of the population – also called “collective trauma.” My research group at the University of California, Irvine (UCI) has found that such exposures have compounding effects over the course of one’s lifespan. This is particularly relevant for children who have grown up in a post-9/11 society.

Post-traumatic stress symptoms include feeling the event is happening again (e.g., flashbacks, nightmares), avoiding situations that remind individuals of the event (e.g., public places, movies about an event), negative feelings and beliefs (e.g., the world is dangerous) or feeling “keyed up” (e.g., difficulty sleeping or concentrating). 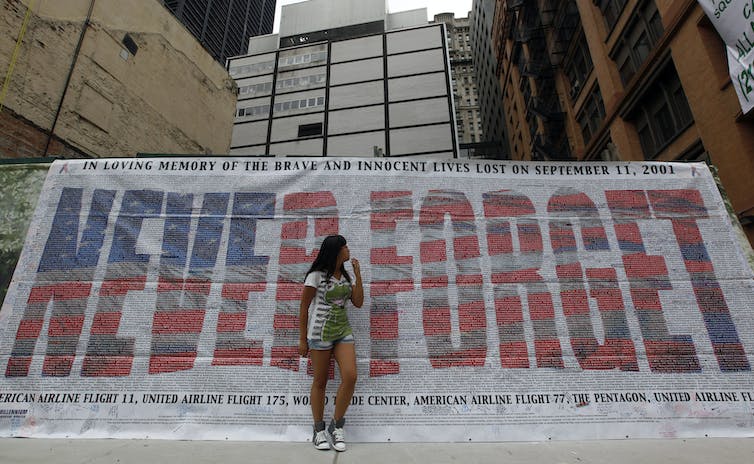 Collective trauma is experienced by those who might not be near at the time of the event. Jim Young/Reuters

In order to meet diagnostic criteria for PTSD, an individual must have been directly exposed to a “traumatic event” (e.g., assault, violence, accidental injury). Direct exposure means that an individual (or their loved one) was at or very near the site of the event. It might be somewhat obvious that people directly exposed to a collective trauma like 9/11 might suffer from associated physical and mental health problems. What is less obvious is how people geographically distant from the epicenter or “Ground Zero” might have been impacted.

This is particularly relevant when considering the impact of 9/11 on children and youth across America: Many reside far from the location of the actual attacks and were too young to have experienced or seen the attacks as they occurred. The point is people can experience collective trauma solely through the media and report symptoms that resemble those typically associated with direct trauma exposure.

Impact on physical and mental health

The events of 9/11 ushered in a new era of media coverage of collective trauma, where terrorism and other forms of large-scale violence are transmitted into the daily lives of children and Americans families.

I have been exploring these issues with my collaborators Roxane Cohen Silver and E. Alison Holman. My colleagues surveyed a nationally representative sample of over 3,400 Americans shortly after 9/11 and then followed them for three years after the attacks.

In the weeks and months following the 9/11 attacks, media-based exposure was associated with psychological distress. This included acute stress (which is similar to PTS but must be experienced in the first month of exposure), post-traumatic stress and ongoing fears and worries about future acts of terrorism (in the months following the attacks).

These harmful effects persisted in the years following 9/11. For example, the team found measurable impact on the mental and physical health (such as increased risk of heart diseases) of the sample three years after the attacks. Importantly, those who responded with distress in the immediate aftermath were more likely to report subsequent problems as well.

These findings bear close resemblance to research led by psychologist William Schlenger, whose team found that Americans who reported watching more hours of 9/11 television in the immediate aftermath of 9/11 were more likely to report symptoms resembling PTSD. For example, those who reported watching four to seven hours were almost four times as likely to report such symptoms compared to those who watched less.

These findings were echoed in work conducted by Michael W. Otto, who also found that more hours of 9/11-related television watching was associated with higher post-traumatic stress symptoms in children under 10 in the first year following the attacks.

However, it is also the case that studies have found the number of children who reported longer-term distress symptoms to be relatively low. Among other factors, children whose parents had low coping abilities or themselves had learning disabilities tended to report higher distress.

For example, my collaborator Virginia Gil-Rivas, who studied American adolescents exposed to 9/11 only through the media, found that symptoms of post-traumatic distress decreased in most adolescents at the one-year mark. An important finding of her study was how parental coping abilities and parental availability to discuss the attacks made a difference. 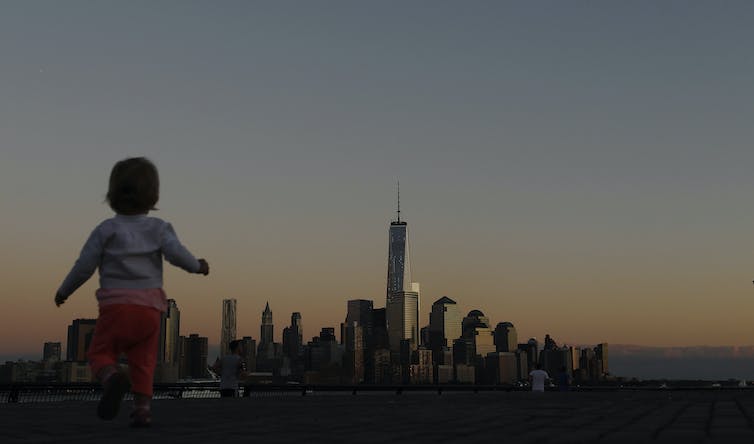 Collective Trauma: What’s been the impact on children? Gary Hershorn/Reuters

Furthermore, children who had prior mental health problems or learning disabilities tended to be at higher risk for distress symptoms. That could be because children prone to anxiety in general experienced increased feelings of vulnerability.

Despite the number of studies that have followed children over the course of several years, no studies have comprehensively examined the long-term impact of 9/11 on children’s development and adjustment. That is because it is difficult to compare American children who lived through 9/11 with those who did not, since almost every American child was exposed to images of 9/11 at some point in time.

This limits the ability of researchers to examine how children’s lives might have changed over time.

However, some researchers believe that even media-based exposure to collective trauma could likely have a longer-term impact on the attitudes and beliefs of those who grew up in a post-9/11 world. It is possible, for example, that exposure to 9/11 and other acts of terrorism has led to fears of perceived threats, political intolerance, prejudice and xenophobia in some American children.

Years later, a bigger question is: How does the collective trauma of 9/11 affect people today?

Over the past several years, my team and I have sought to address many of the issues that remained unanswered in the scientific literature after 9/11. We sought to replicate and extend the findings initially produced after 9/11 through an examination of responses to the 2013 Boston Marathon bombing, the worst act of terrorism in America since 9/11.

To this end, we surveyed 4,675 Americans. Our sample was demographically representative, meaning that our sample proportionally matched the U.S. Census data on key indicators such as ethnicity, income, gender and marital status.

Our study found that as media exposure (a sum of daily hours of Boston Marathon bombing-related television, radio, print, online news and social media coverage) increased, so did respondents’ acute stress symptoms. This was even after statistically accounting for other variables typically associated with distress responses (such as mental health).

People who reported more than three hours of media exposure had higher probability of reporting high acute stress symptoms than were people who were directly exposed to the bombing.

Then, last year, we sought to explore whether the accumulation of exposure to events like 9/11 and other collective trauma might influence responses to subsequent events like the Boston Marathon bombing. 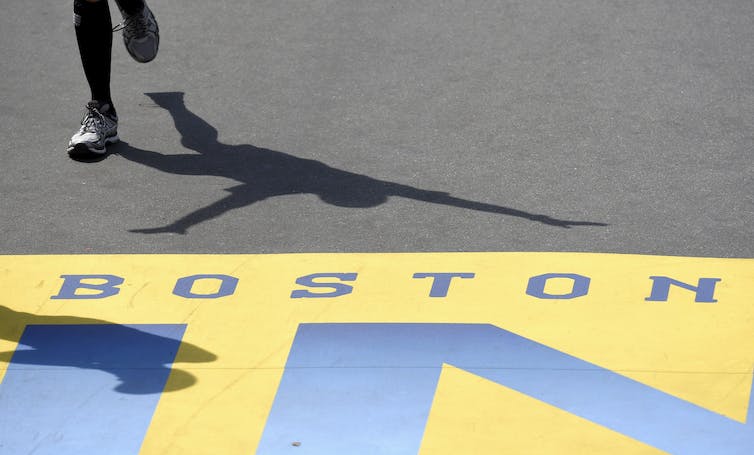 Collective Trauma: A runner approaches the finish line during the 120th running of the Boston Marathon. Gretchen Ertl/Reuters

Second, greater amounts of media-based live exposure (i.e., people watched or listened to the event as it occurred on live television, radio, or online streaming) to prior collective trauma were also associated with higher acute stress symptoms after the Boston Marathon bombing.

So greater direct and media-based exposure to prior collective trauma was linked with greater acute stress responses (e.g., anxiety, nightmares, trouble concentrating) after a subsequent event.

Overall, our research indicates that the impact on children growing up post-9/11 likely extends well beyond the physical and mental health effects of exposure – be it direct or media-based. Each tragic incident that individuals witness, even if only through the media, likely has a cumulative effect. 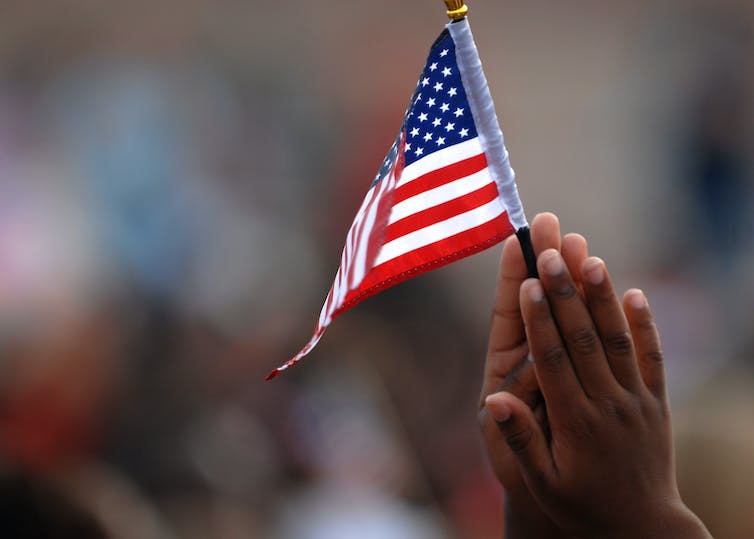 Collective Trauma: People are resilient, but they need to be aware of the potential for distress. DVIDSHUB, CC BY

Even so, being aware of the potential for distress through media exposure is important. Even small percentages can have large implications for our nation’s physical and mental health. For example, in the case of 9/11, 10 percent of a nationally-representative sample reporting post-traumatic stress represents 32,443,375 Americans with similar symptoms.

So, people should stay informed, but limit repeated exposure to disturbing images, which can elicit post-traumatic stress and lead to negative psychological and physical health outcomes.