World War I was still a living memory for most Americans when I was growing up in the 1960s and early 1970s.

Aging doughboys who had fought on the Western Front in 1917 and 1918 still marched on Veterans Day. These World War I enlisted men often referred to this holiday by its original name, Armistice Day.

My mother invariably bought and wore an artificial red poppy on Veterans Day. I learned much later the poppy signified the blood and sacrifice of those who died on Flanders Field, a Belgian battle site that was the subject of the war’s most famous poem.

With the 101st anniversary of the end of the First World War on Nov. 11, 2019, as a scholar who has spent my career studying war in 20th-century America, I am struck by the degree to which World War I has faded from popular memory. 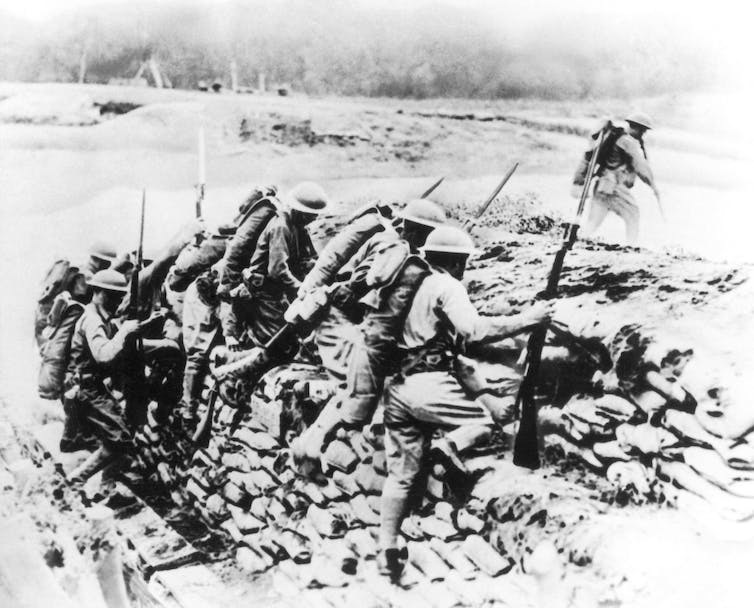 Few Americans can name a single battle from this conflict. Heroes such as “Ace of Aces” fighter pilot Eddie Rickenbacker and “the greatest civilian soldier of the war” Alvin York are no longer household names.

Even fewer Americans remember the distinguished record of the Harlem Hell Fighters and other black regiments attached to the French army.

The fact that World War I is the forgotten war for Americans serves as a cautionary tale that some important memories can fade despite sustained efforts to foster them. 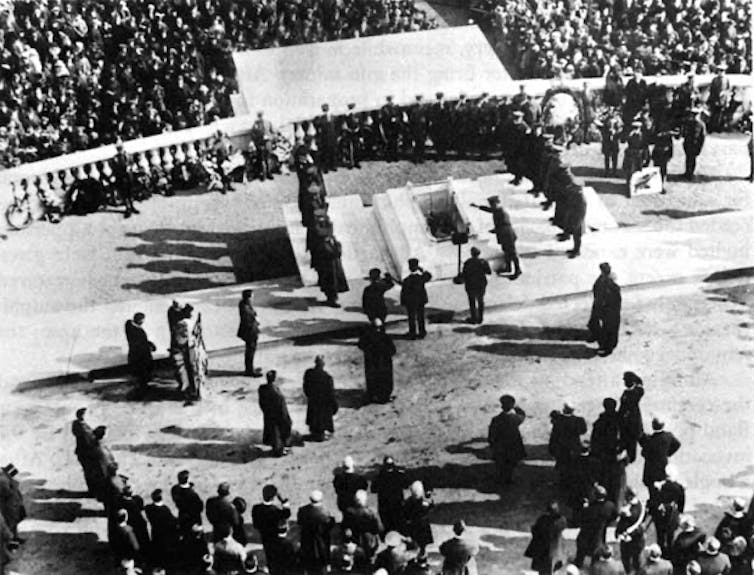 On Nov. 11, 1921, the official first unknown soldier is buried in this tomb in Arlington National Cemetery. U.S. Army

World War I broke out in Europe in 1914, eventually pitting Germany, the Austro-Hungarian Empire, the Ottoman Empire and Bulgaria against Belgium, France and its empire, Great Britain and its empire, Canada, Australia, New Zealand, Russia, Serbia, Romania, Italy, Japan, China, Portugal and a number of smaller nations.

The U.S. was officially neutral at the beginning of the war. Most Americans saw no compelling argument to send American troops to fight Europe’s war abroad. Late in the war, and only after a divisive debate and German submarine attacks that caused the death of Americans, did the United States enter the conflict in 1917.

The United States’ entry into the war ensured the European balance of war and avoided German dominance on the continent. The victory achieved on Nov. 11, 1918 at 11:00 a.m. would be commemorated by Americans as the “war to end all wars.”

In its aftermath, the war was publicly acknowledged in a variety of ways. The generation that went to war in 1917 transmitted its memory through the thousands of memorials they built, the Memorial Day holiday, and in their memoirs of war as a glorious endeavor.

Under the auspices of the American Battle Monuments Commission, they established overseas national cemeteries for the war’s dead and erected monuments in France and the United Kingdom.

They created a new way of mourning the war dead with the Tomb of the Unknown Soldier, where the unidentified dead received a state funeral and burial at Arlington National Cemetery.

Indeed, World War I marked the first time that many countries systematically created graves for all soldiers, whether they could be identified or not.

And in Paris in 1919, American veterans of World War I founded the American Legion, which is still the nation’s largest veterans organization. 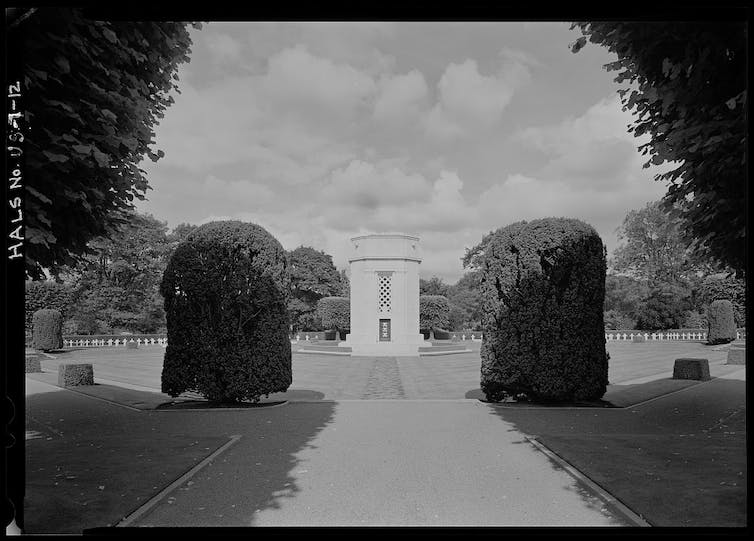 Flanders Field American Cemetery and Memorial, in Waregem, Belgium, where 411 American soldiers who died in WWI are buried. Library of Congress

What has been lost along with the memory of the war is the memory of the bitter debates that engulfed the United States in the decades after the war, in the 1920s and 1930s. When researching my dissertation and first book, “Remembering War the American Way,” I was stunned by how virtually every aspect of commemorating the war engendered debate during the interwar period.

During my eighth-grade class trip to Arlington National Cemetery to visit the Tomb of the Unknown Soldier in 1974, I remember how impressed we were at the spit and polish of the ceremony marking the changing of the guard. In fact, the origins of this ceremony and even the need for a guard in the first place stems from complaints of the American Legion in the 1920s that tourists were picnicking on the unfinished tomb and, even worse, that juvenile delinquents were playing games on them.

Those who build memorials are often implicitly aiming to accomplish something other than memorializing.

In the case of World War I, the memorials were intended to heal and mask regional, ethnic and ideological divisions. For instance, the Unknown Soldier was hailed as an everyman because he could be rich and poor, native born or foreign born, a city dweller or a farmer.

The paradox of these efforts to forge memories in stone, marble and copper is that memorials are often overshadowed by the controversies they are intended to heal.

Although memorials to World War I proclaimed that Americans had fought a “war to end all wars,” the post-war world remained perilous. Many elements contributed to the growing danger: a return of American isolationism, the war debt owed to the U.S. by European allies, the crushing of “Prussian militarism” that led to the birth of communist Russia, and the fascism that took hold of Italy in the early 1920s.

Memorials sought to display the unity of all Americans, but the terrible legacy of World War I was the fear it engendered. During the war, German Americans were persecuted by vigilantes because of their ancestry. Despite the patriotic service of scores of new Americans from southern and eastern Europe, the U.S. Congress passed legislation restricting immigration of what were deemed undesirable immigrants from these regions.

Why have Americans forgotten World War I?

Perhaps the answer is that World War II reshaped the memory of the First World War. The fact that another world war broke out in less than a generation discredited the notion that World War I was a “war to end all wars.” As World War I faded into oblivion, it became easier to simply forget all the deep divisions engendered by this war for the more comforting narrative of World War II as the “good war.”

G. Kurt Piehler, Associate Professor of History, Florida State University. This article is republished from The Conversation under a Creative Commons license. Read the original article. Be sure to sign up for Tag The Flag’s nonpartisan newsletter to have articles like this delivered directly to your inbox every weekday morning.