Daniel Boone National Forest encompasses 708,000 acres and 21 counties in southern and eastern Kentucky. Here’s everything you need to know about one of the most beautiful areas of our country.

Daniel Boone National Forest, originally called Cumberland National Forest, encompasses 708,000 acres and 21 counties in southern and eastern Kentucky. It’s somewhat interesting that the national forest was ultimately named after the famous frontiersman, Daniel Boone, seeing as how he was born and spent his childhood in states other than Kentucky. Moreover, he didn’t particularly care for the coonskin cap that history inevitably placed on his head. Nevertheless, the name of the forest was changed in 1966 in honor of the explorer.

Canadian writer and expert on Boone, Alix Hawley, wrote about “Dan’s” life, holding it up as the classic American belief that paradise was just beyond the next mountain, with the constant desire to pick up and move on. “Dan never really stopped exploring through North Carolina and the Blue Ridge mountains, and later [he took] his wife and children into the Kentucky wilderness of his fantasies,” Hawley says. Daniel Boone died of natural causes in Missouri at his home when he was 85. His body was exhumed and re-buried in Kentucky 20 years later. 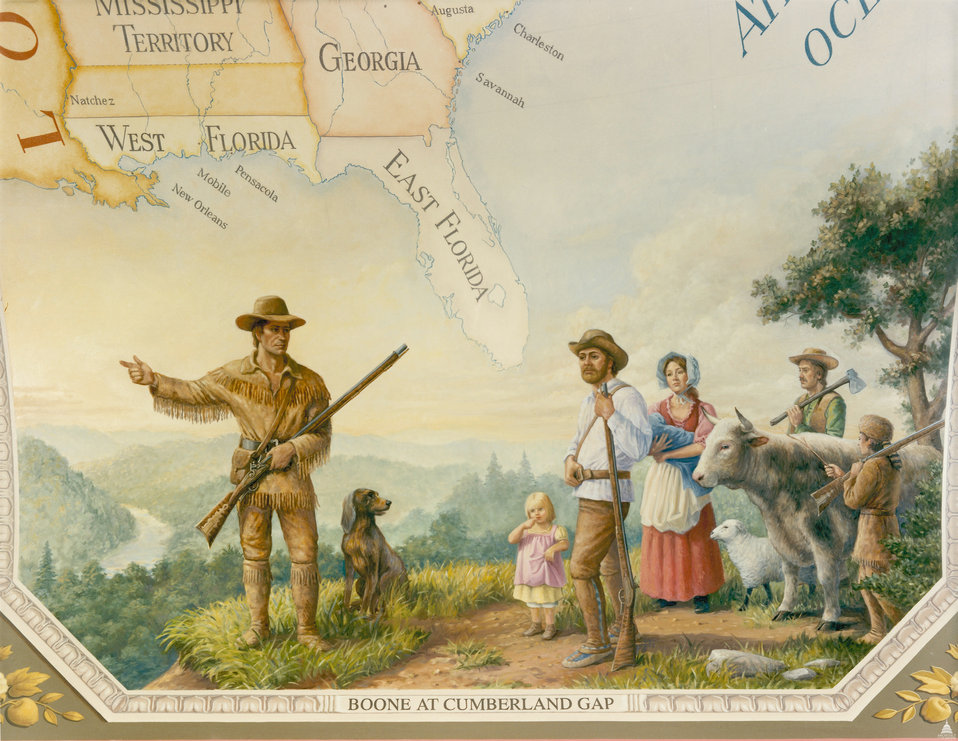 Daniel Boone at the Cumberland Gap

The Transylvania Company hired Daniel Boone in 1775. His job was to widen a gap through the Appalachian mountains in what is today Kentucky and Virginia. There are only five natural ways to travel to the west; one of those is the Cumberland Gap in the four-state region of North Carolina, Virginia, Tennessee, and Kentucky. The widening of this gap would make the western portion of the continent much more accessible and open to settlement.

Boone started his trip on March 10, 1775 with 35 axmen. They began cutting a trail from Long Island in Kingsport, Tennessee through the forests and mountains to Kentucky, land which the Transylvania Company had obtained from the Cherokee and Iroquois in the area. However, the Shawnee attacked the explorers, killing a number of Boone’s men. The remaining men, along with Boone, fought off the attack and finished their task of widening the route through the mountains in that area. One of the first English-speaking settlements west of the Appalachians, Fort Boonesborough, was set up by Boone and his men on the other side of the Gap.

What is there to do in Daniel Boone National Forest?

This brings us back to the National Forest in the area that carries his name today: Daniel Boone National Forest. True to his legacy, there is plenty to keep visitors exploring the park, including water-based recreation in the multitude of lakes, rivers, and streams. Visitors enjoy swimming, tubing, fishing, and water skiing. Visitors can also boat and swim year-round. There are even some non-traditional activities available in the park such as geocaching, caving, and letterboxing.

There are 600 miles of trails for hiking, plus biking trails and sandstone cliffs for climbing. Here are a few of the exceptional opportunities for visitors who revel in exploring the trails:

Sky Bridge Trail #214 is a semi-blacktop loop trail along a high narrow ridge and is accessed at the Sky Bridge parking area. It offers numerous scenic overlooks and passes both over and under Sky Bridge, a natural sandstone arch and then returns hikers along a high cliff shelf back to the parking area.

Rock Bridge Trail is one of the most scenic trails in the Gorge area, with the natural rock bridge and waterfall included in the hike.

View from Tater Knob in the Daniel Boone National Forest in Kentucky, USA.

Boone National Forest offers many areas for all kinds of campers, from RVs to tents. RVs can find sites within three areas of the park: Cumberland, London Ranger, and Sterns. There are many areas for campground camping as well, and the range of amenities varies, so do some research before picking a site. Campgrounds are in the same three districts as RV camping plus the Sheltowee Trace District. Cabins are available in the Cumberland District for those who want a bit more comfort.

Driving Through The Forest

Areal view of the dam at Laurel River Lake

What about driving trips for a day or two? There are over 600 miles of roads available to explore eastern and southern Kentucky forests by car. Scenic byways wind through Red River Gorge and Zilpo National Forest, offering breathtaking views that change from season to season. There are also the Wilderness Road Heritage Highway and the Cumberland Cultural Heritage Highway passing through the forest.

Can you hunt in Daniel Boone National Forest?

The park also hosts many events throughout the year, such as a fishing derby, archaeology weekend, and many others depending on the season.

Be sure to sign up for Tag The Flag’s nonpartisan newsletter to have articles like this delivered directly to your inbox every weekday morning.