The Final Salute is done for veterans who die under the care of VA doctors. After pronouncing death, the patient’s family is called and comes in to see their loved one. The body is placed on a gurney and is draped with Old Glory, the symbol of our freedom. Written by, Sanjay Saint, University of Michigan

Death is never easy. Even when expected, a person’s death leaves a void for those who remain. As a physician, it is especially difficult for me when one of my patients dies.

I practice medicine at one of America’s approximately 160 Veterans Affairs hospitals, so my patients are all veterans. The VA system – the largest integrated health care system in the United States – cares for approximately 9 million veterans, men and women who were willing to sacrifice greatly for our country. 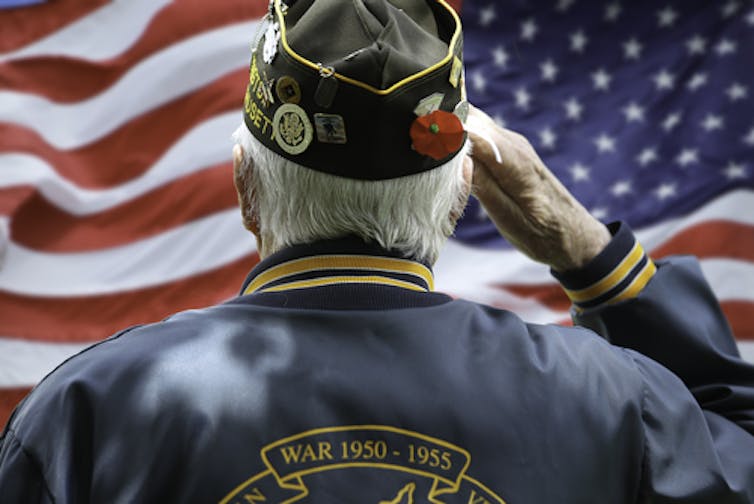 The Final Salute: A veteran salutes a flag. There is often a final one that occurs inside a VA hospital. flysnowfly / Shutterstock.com

News about transitions at the very top of the VA put me in a reflective mode, thinking about the core reason that we do what we do at VA health care facilities around the nation. As a VA doctor, it is sometimes difficult to read the frequent criticism about the VA and its hospitals without getting dejected, but, fortunately, most of us are inspired by those who entrust us with their care and their lives.

Abraham Lincoln, in his second inaugural address on March 4, 1865, gave the VA its mission: “To care for him who shall have borne the battle and for his widow, and his orphan.”

I’ve been involved in caring for veterans since my first days in medicine, through many changes. As a medical student and resident, I cared for World War I veterans. They are now all gone.

I am now always honored to care for World War II veterans, most of whom have also passed.

Next will be veterans of the Korean War (like my father-in-law), Vietnam, Iraq and Afghanistan. It was these men and women who bravely served this country and who kept it free and open to people like me and my family – immigrants who were looking for better lives.

I did not sit in the foxhole with them or parachute into jungles, but I still have a duty. My duty is to provide America’s veterans with superb medical care, delivered in a humane, compassionate and high-quality manner.

When a veteran dies at our VA hospital, we all feel the loss. Even though I have been caring for veterans for over two decades in four different VA hospitals – as a medical student, resident, fellow and now as an attending physician – I only recently witnessed a ceremony that is both beautiful and heart-wrenching.

It is known as the Final Salute, and it is done for veterans who die under our care.

After pronouncing death, the patient’s family is called and comes in to see their loved one. The body is placed on a gurney and is draped with Old Glory, the symbol of our freedom. As the body and family are led out of the hospital room to the exit, “Taps” is played – the signal for the health care workers, and, especially, their fellow soldiers, to come to the doors of their rooms.

Civilians stand with their hands on their hearts. Veterans give the military salute, standing if they are able.

For me as a civilian, I am reminded of how lucky others and I are that we get to care for these men and women, who all too often are forgotten and are struggling with demons. Rituals and ceremonies are important links to the past, and they are reminders of what it takes to improve tomorrow. Being a VA doctor gives me pride, no more so than when I watch how our VA honors those veterans who have died.

As the headlines point out, however, the VA should strive to provide the best care anywhere. Even though studies have found that overall VA care is comparable to and often better than non-VA care, the VA needs to do much more to make the VA a model system for not just this country but the entire world.

I think that President Donald Trump’s call to increase the VA budget for fiscal year 2019 is a step in the right direction. Not only will extra resources provide veterans more choices for care, but they also will help prevent veteran suicides, reduce opioid use, and expand cutting-edge VA research on prosthetics and veteran safety. 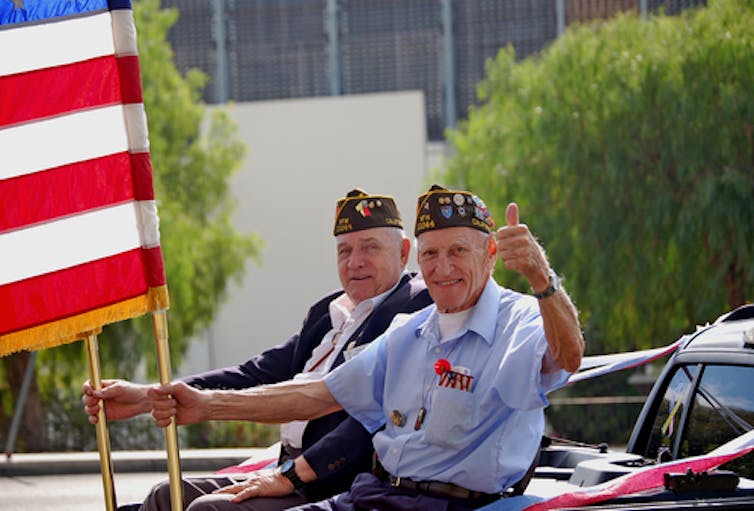 The Final Salute: Most Americans and politicians can agree on at least one thing: support for veterans. Cheryl Casey/Shutterstock.com

Support for veterans has, fortunately, remained bipartisan. Despite the change of leadership currently happening in the VA secretary’s office – and the continued controversy the role of the private sector could and should have in providing care to veterans – my plea from the field is that our elected leaders continue to do right by veterans.

My colleagues and I – the men and women who have the privilege to care for America’s heroes in VA health care facilities around the country – are honored to provide the high-quality and compassionate care veterans deserve from the moment they leave the service to the time of their Final Salute.

Sanjay Saint, George Dock Professor of Medicine, University of Michigan. This article is republished from The Conversation under a Creative Commons license. Read the original article. Be sure to sign up for Tag The Flag’s nonpartisan newsletter to have articles like this delivered directly to your inbox every weekday morning.