The history of the US Navy flag begins in the waters of the Delaware River in 1775, as the Continental Navy prepared to battle the British. The exact design is unknown, which is understandable considering the circumstances. The Continental forces were fighting for the formation of a new country, one that had limited history—and no flag—of its own yet. They certainly couldn’t use Union Jack, which was the British flag and thus represented the enemy. At the time, however, Commodore Esek Hopkins ordered his fleet to raise a striped “jack” (a military vessel’s flag) and ensign, or war flag, which was likely the Grand Union Flag or the striped version of it. The History of the Military Jack

The history of the military jack – consisting of thirteen red and white stripes, an uncoiled rattlesnake, and the motto “Don’t Tread on Me” – is uncertain. This design was first seen in Admiral George Henry Preble’s History of the Flag of the United States. Although there is more recent indication that it only appeared in an engraving from 1776, the rattlesnake has long been a symbol of Patriot resistance to the British during the American Revolutionary War. Whether it was the official Navy flag at any point is not certain. Today, the only US ship authorized to fly this jack is the USS Blue Ridge (LCC-19) to indicate that it is the commissioned ship with the longest total period in active status.

The Infantry Battalion flag (below) represented the US Navy landing forces beginning ate the end of the nineteenth century. This blue flag features what many associate most closely with any fleet: the anchor in a white diamond. This flag served as the unofficial Navy flag for more than sixty years, but only in drill formations, parades, and during other ceremonies. The first official Navy Jack, shown below, was authorized by the US Navy and used from 1975 to 1976 and then again from 2002 until the present. It is only flown when a ship is moored pierside or at anchor, and currently is only used by the oldest active warship in the US fleet. The US Navy flag (below) is used ashore and then only for ceremonial purposes. This is the flag created by Executive Order 10812 and it describes the design clearly by saying:

The flag for the United States Navy is 4 feet 4 inches hoist by 5 feet 6 inches fly, of dark blue material, with yellow fringe, 2½ inches wide. In the center of the flag is a device 3 feet 1 inch overall consisting of the inner pictorial portion of the seal of the Department of the Navy (with the exception that a continuation of the sea has been substituted for the land area), in its proper colors within a circular yellow rope edging, all 2 feet 6 inches in diameter above a yellow scroll inscribed “UNITED STATES NAVY” in dark blue letters. The flag is always displayed with streamers commemorating the battles, campaigns and service of the Navy since 1775. Currently there are 28 battles streamers, indicating battles from the US Revolution to the Kosovo Campaign.  The Presidential Unit Citation, the Navy Unit Commendation and the Navy Meritorious Unit Commendation represent the Unit citations.

There are many customs and regulations concerning the jacks, ensigns, and flags on US Navy ships, many beginning with those observed in the British fleet. British Admiral Lord St. Vincent established a practice of raising and lowering the colors, meaning the ensign and the jack, with a formal ceremony including a parade and band. The US Navy adopted this practice, which is outlined in the Rules and Regulations for the Government of the Navy.

Morning and evening colors are outlined in Article 1206 of Navy Regulations, and the practice is observed on all US Navy vessels that are not under way at sea and at all shore stations of the Navy and Marine Corps. Because bands and buglers are seldom available today, as much formality as is possible is incorporated into the ceremonies.

To dress or full-dress a ship is another custom involving US Navy flags, in this case in a celebration of national holidays or other important national observances. A ship is dressed by raising the national ensign, the union jack, and additional ensigns at every masthead. This only takes place during the normal hours of 8 AM to sunset and only while in port. Officers may also direct a display of lights at night. A rainbow of signal flags and pennants displayed from stem to stern indicates a full-dress of the ship, and when observing a US celebration, the ensigns at the mastheads are the Stars and Stripes. For a foreign celebration when a US ship is present in a foreign port, the foreign country’s naval ensign is flown at the head of the mainmast. 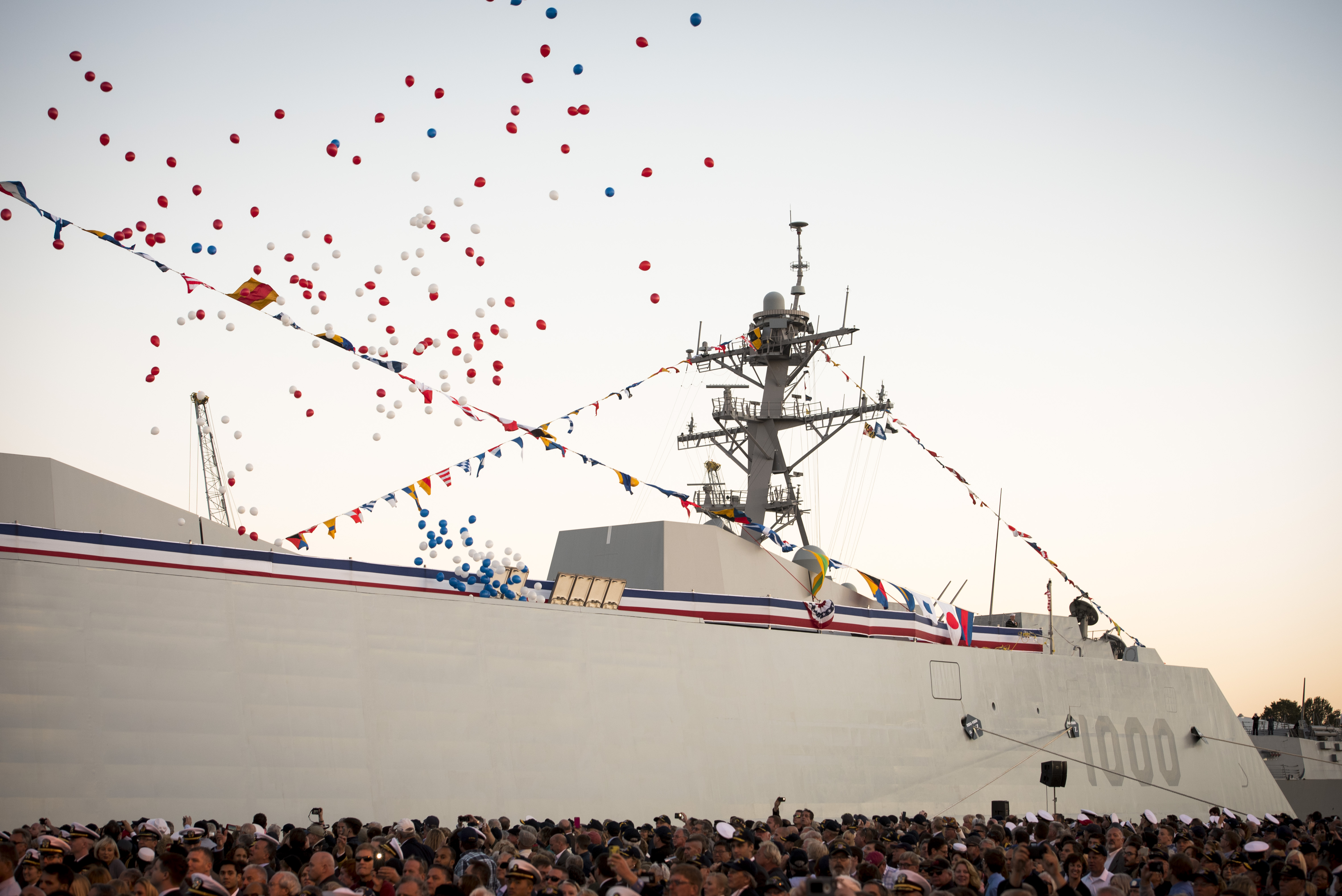 Be sure to sign up for Tag The Flag’s nonpartisan newsletter to have articles like this delivered directly to your inbox every weekday morning.