COVID-19 cases as of March 22 2019. The Center for Systems Science and Engineering at John Hopkins University

The first documented case of COVID-19 is thought to have appeared on December 1 2019 in Wuhan, China. Four months later, the world is in the middle of a pandemic with little idea of what comes next. Yet this is not the first pandemic to occur in recent years. On March 17 2009, the first case of a novel H1N1 influenza virus infection, also known as swine flu, was documented in Mexico. It rapidly spread throughout Mexico and the US and was declared a full pandemic by the WHO on June 11 2009.

Swine flu circulated around the world in two waves until August 10 2010, when the WHO officially declared the pandemic over. By comparing the coronavirus pandemic with the 2009-2010 H1N1 pandemic and looking at modern forecast models, we might be able to better assess what to expect over the coming weeks to months.

As of March 22, we are in week 16 of the COVID-19 pandemic, roughly equivalent to July 8 2009 of the H1N1 pandemic. These two points in time offer a useful comparison as the number of cases in both the US and UK were at nearly identical levels in both pandemics.

Second, there are already over three times as many cases of COVID-19 as there were pandemic H1N1 cases in the same time period. This probably reflects the R0 or replication number of the virus – this refers to how many people, on average, an infected person will spread the virus to. For the 2009 H1N1 virus it was estimated to be 1.5, whereas COVID-19 is estimated to be between 2.38 and 3.28.

Finally, the rate of COVID-19 fatalities is increasing almost twice as fast as was seen at this time for the 2009 H1N1 virus. The H1N1 pandemic lasted nearly 16 months and by the end of the pandemic on August 10 2010 the WHO determined that there had been 6,724,149 confirmed cases and 18,449 confirmed deaths over 214 countries.

With both pandemics, there are many mild cases that often go undetected and unconfirmed. For the 2009-2010 H1N1 pandemic this has been retrospectively examined and it was estimated that in the US there were 61,000,000 cases, 274,000 hospitalizations and 12,470 deaths. This means that the number of confirmed 2009 H1N1 cases was only 0.056% of the actual number of cases and would give a revised global fatality rate of 0.021%.

For COVID-19, recent reports from China suggest confirmed cases represent only 14% of the total number of cases. If so, there would be 578,957 cases in China, giving a fatality rate of 0.56 – half the 1.17% currently seen in South Korea. Even using that lower rate, there could be still 133,630 fatalities caused by COVID-19. Given that we have almost reached the same level of cumulative deaths as seen during the whole 2009 H1N1 pandemic, the global impact of the COVID-19 pandemic will be far greater than that experienced in 2009-10.

As the current pandemic is already surpassing the number of fatalities seen in 2009, we can expand our predictive analysis by modelling the spread of COVID-19 using recent epidemiological data from China. The graph below shows the predicted number of cases (in pink) and cumulative fatalities (in blue) in the US for each day over the coming year, if no containment measures are taken. 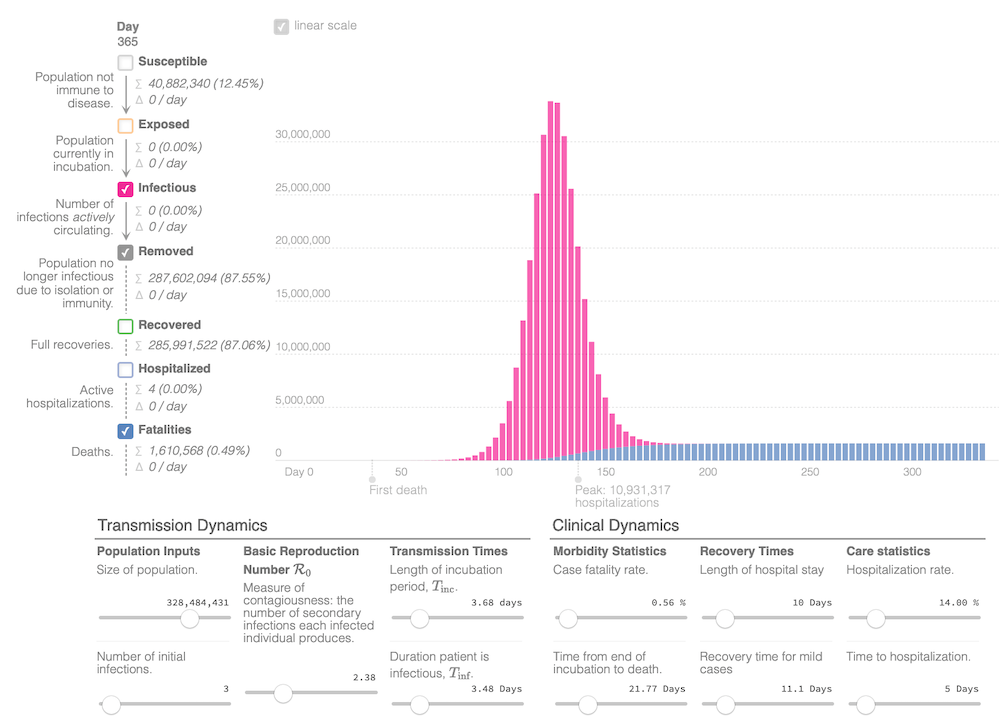 SEIR model was created at http://gabgoh.github.io/COVID/index.html. Date of first case was set as 20 Jan: https://www.nejm.org/doi/full/10.1056/NEJMoa2001191 and intervention set as day 63 (22 March). R0, incubation and infectious period were based on: https://science.sciencemag.org/content/early/2020/03/13/science.abb3221.long. CFR was based on: https://science.sciencemag.org/content/early/2020/03/13/science.abb3221.long. All other values were as recently described: https://medium.com/@tomaspueyo/coronavirus-the-hammer-and-the-dance-be9337092b56. Jeremy Rossman using Gabriel Goh’s Epidemic Calculator

Even with the conservative estimate of a 0.56% case fatality rate and a 2.38 R0, COVID-19 would result in over 1.6 million fatalities in the US and 330,000 in the UK within one year. The peak hospitalization burden of 10.8 million people in the US would also overwhelm the healthcare infrastructure, significantly increasing the effective fatality rate for both COVID-19 cases as well as other accidents and illnesses that require hospitalization.

In China, the initial containment effort was estimated to reduce the R0 of 2.38 to a Rt of 1.36. Thanks to tighter travel and movement restrictions, it later fell to 0.98. These numbers include both confirmed cases and the estimated unconfirmed mild and asymptomatic cases. If examining only the impact on the most severe and confirmed cases, the later interventions decreased Rt to 0.36. Using this number as a comparison, we can now estimate the impact of currently implemented intervention strategies in relation to interventions in China over a period of one year from the first case – see below: 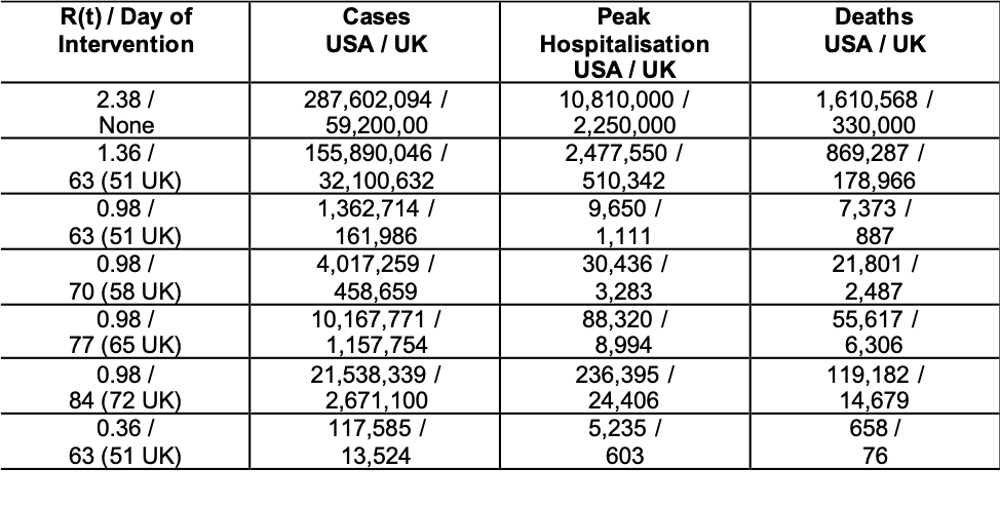 As we can see, reducing Rt to 1.36 still results in over 155 million cases in the US and 32 million cases in the UK. That’s nearly a million fatalities in the US and over 178,000 fatalities in the UK. However, if our current intervention strategies reduce the rate to 0.98, as was done in China, this would dramatically reduce the number of cases, deaths and peak hospitalizations, while also spreading the peak of infection over a longer duration of time.

The graph below shows the predicted number of cases and cumulative fatalities in the US for each day over the coming year, if the current interventions reduce Rt to 0.98. Note that the scale on this graph is in thousands of cases instead of millions of cases as seen above with no intervention taken. 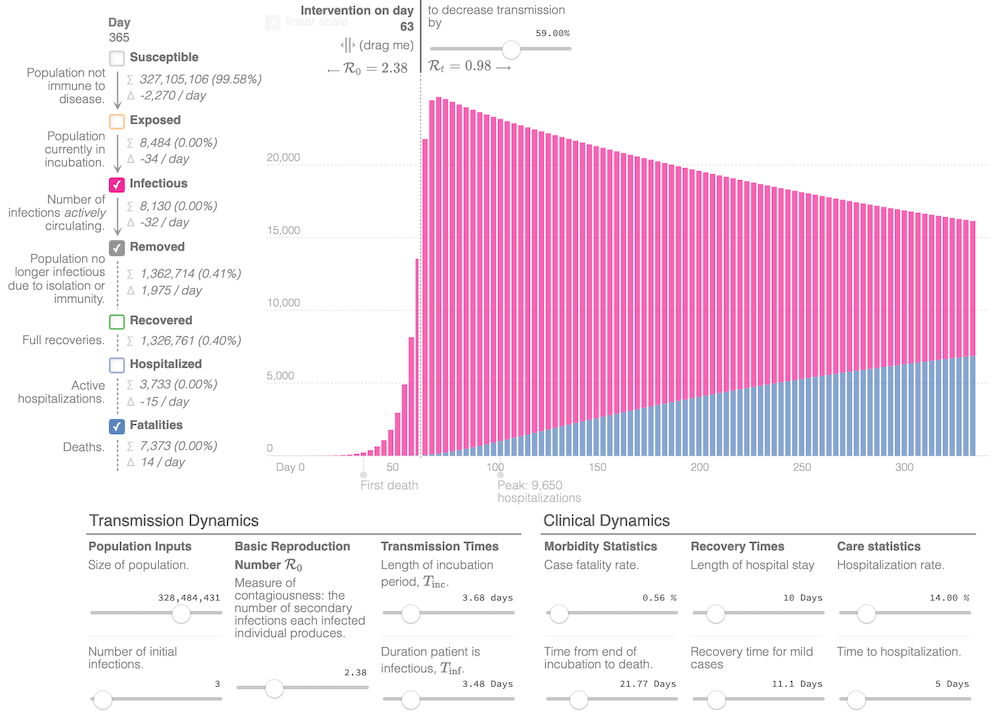 If we can further reduce Rt to 0.36, we shorten the duration of the outbreak and dramatically reduce cases, hospitalizations and fatalities. But this dramatic reduction may not be possible when factoring in the number of asymptomatic cases seen in China.

Also, each one of these scenarios depends on our already implemented interventions successfully reducing Rt to the indicated value. But the restrictions on travel and personal mobility that China imposed were far greater than those currently in use by the US and the UK. China also employed widespread testing and isolation of even mild cases, which probably played a significant role in reducing Rt. So the interventions in use in the US and UK may lead to a smaller reduction of Rt, perhaps closer to 1.38, as seen early in the China outbreak.

What is clear is that the later we act to reduce the Rt below 1, the greater the cost in illness and death. If our interventions don’t bring Rt to 0.98 for a further one, two or three weeks, the case numbers, hospitalizations and fatalities will all increase by two or three times with each week of delay.

At present, there is no way to determine exactly how much our current interventions will reduce Rt. Also, steadily increasing intervention strength will have a larger impact than is reported by this single-step model. But there are still four clear messages:

There are many areas in the US and the UK that at present have very few cases; however, everyone is feeling the impact of closures, lockdowns and physical distancing measures. US President Trump and others have said “we cannot let the cure be worse than the problem itself”.

While these models are not perfect predictors, they track current trends with high accuracy and show that the impact of more moderate interventions could be devastating. Strong, immediate intervention is necessary to prevent significant loss of lives and to prevent the collapse of health infrastructures.

There is definitely a need to address the long-term socioeconomic impact of these measures and ensure that there is a plan for their gradual phase-out and increased surveillance and testing. But the central message is that these measures could bring each country’s outbreak under control within two months and save thousands to hundreds-of-thousands of lives.

Jeremy Rossman, Honorary Senior Lecturer in Virology and President of Research-Aid Networks, University of Kent. This article is republished from The Conversation under a Creative Commons license. Read the original article.