Storm clouds are stirring over the Fed. Fandrade/Getty Images

The United States Federal Reserve has committed to do everything it can to save the financial system and the American economy from collapse.

Most recently, it began an unprecedented effort to ensure banks, companies and now households have all the money they need by offering to buy unlimited amounts of securities, including bundled student loans and credit card debt. Even at the peak of the financial crisis in 2008, the Fed’s actions were much more limited in scope – as well as speed.

My colleagues and I at the Indiana Business Research Center have been studying the Fed, its actions and the economic impact for over a quarter-century. Here’s a quick primer on the U.S. central bank, how it works and what it’s doing to keep the economy from sinking into depression.

No guarantee of safety

Before Congress created the Federal Reserve System, the safety and soundness of U.S. banks was hardly a sure thing.

Bank runs – when a large number of customers withdraw their deposits simultaneously over concerns of a bank’s solvency – were common, such as during the Gilded Age from 1863 to 1907, when financial crises occurred frequently.

Yet many Americans were uncomfortable with the idea of a powerful central financial authority. Alexander Hamilton’s short-lived First Bank of the United States, which was “dominated by big banking and money interests,” did little to help to allay those concerns.

Without a central bank, it fell to private financiers like John Pierpont Morgan to avert financial crises by infusing their own capital into the economy. Recurring crises like these eventually led more people to believe that monetary policy and banking should be centralized, culminating in the 1913 Federal Reserve Act.

The act said the Fed would handle monetary policy and stimulus, keep banks safe and sound, and make sure the amount of money circulating was appropriate.

While initially successful at limiting bank runs, the Fed failed to prevent the speculative bubble that preceded the Great Depression – and the bankruptcy of nearly 10,000 banks. This led to the Glass-Steagall Act in 1933, which separated commercial and investment banking and created federal deposit insurance to prevent bank runs.

Congress more clearly delineated the Fed’s purpose in 1977, when it passed the Federal Reserve Reform Act and established what became known as the “dual mandate” of maximum employment and stable prices.

It continues to perform other functions in line with its founding purpose, such as identifying and neutralizing risks to the economy, protecting consumers and promoting the soundness of the financial system and individual institutions. 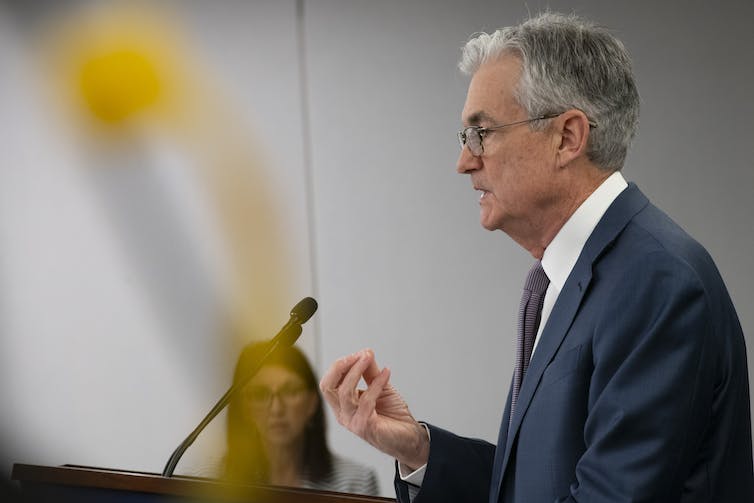 The most well-known tool is the Fed’s ability to set short-term interest rates. When it lowers rates, the Fed aims to reduce borrowing costs for companies and consumers to encourage more lending and investment, thus stimulating the economy. It raises rates primarily when the economy is strong, when it wants to keep a lid on inflation.

The other key tool is its ability to buy and sell debt securities in open-market operations.

The Fed used this tool for the first time in 1923 ostensibly to stem a recession. By buying Treasury securities from private sellers, it was able to pump more money into the banking system, ensuring there was enough cheap credit for borrowers.

The Fed reimagined this powerful tool during the 2008 financial crisis, when it began a program of “quantitative easing” to buy longer-term, riskier debt. At the program’s peak in 2015, the Fed had accrued over US$4.5 trillion in both safe and riskier debt on its balance sheet.

The Fed’s plan to save the US

Financial markets have been in a panic since late February, when they began to reflect anxiety about the economic impact of the new coronavirus.

Since then, the Fed has engaged in a variety of actions to keep financial markets working and calm investors, including backstopping the commercial paper market and supporting money market funds.

It has also been using its two tools in more traditional ways.

The Fed used its first tool in dramatic fashion recently when it cut rates twice, first by half a percentage point and then by a full point, bringing its target rate to basically zero. Barring negative rates, there’s very little it can do to further stimulate the economy this way.

So it turned to its second tool and committed to essentially buy as many securities as necessary to stave off mass layoffs, debt defaults, bankruptcies and depression. This includes buying bundles of investment-grade corporate bonds, student loans and credit card debt for the first time.

As a result, the Fed’s balance sheet, which had fallen below $4 trillion last year, has now swelled to a new record of $4.7 trillion – and could double in size before it’s done, based on the new lending authority it’s being granted by the federal bailout.

Time will tell if this – alongside the $2 trillion in fiscal stimulus Congress is injecting – will be enough.

Ryan Matthew Brewer, Associate Professor of Finance, Indiana University. This article is republished from The Conversation under a Creative Commons license. Read the original article.