It is the year of the Tokyo Olympics, and the International Olympic Committee was quickly out of the blocks with new guidelines regarding athlete protests.

The IOC is worried the biggest stories of the Games will be political gestures rather than sport performances, and so have introduced specific guidelines to prevent “any political messaging, including signs or armbands” and “gestures of a political nature, like a hand gesture or kneeling” during play, opening and closing ceremonies, medal ceremonies, and at the Olympic village.

The IOC has historically shown greater anxiety around the commercial arrangements of athletes, protecting its sponsors. But the rise of the activist athlete now looms as the more immediate threat to the IOC’s image and bank account.

Most Olympians are not household names. But they can become so by taking advantage of the rare moments when the world’s cameras and microphones are within easy reach. No wonder the IOC’s (mostly) elected Athletes’ Commission is keen to ensure athletes do not give in to the “desire to drive change” and “use the platform of an appearance at the Olympic Games to make [their] point”.

The problem for the IOC is that submitting to this temptation is burnt into Olympic iconography.

The Olympic movement has always claimed to be a unifying force – but bringing the athletes of the world together inevitably means they bring along their politics, too. 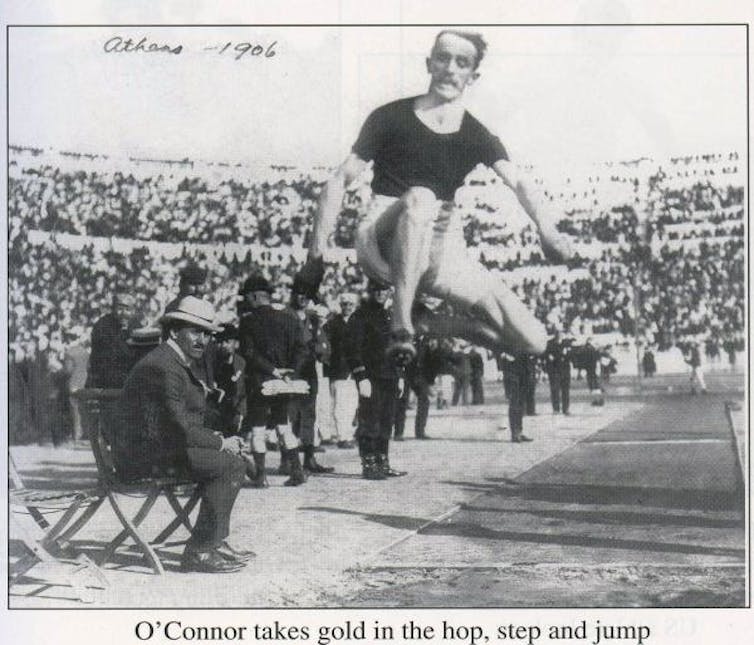 One of the first documented protests at the modern Olympics was Irish athlete Peter O’Connor’s rejection of having to compete under the Union Jack in Athens. After winning the silver medal in the long jump, O’Connor was expected to stand under the British flag at the medal ceremony.

Instead, O’Connor climbed the flag pole and waved the Irish flag.

In the face of multiple threatened boycotts by nations and athletes opposed to South Africa’s refusal to allow black athletes to compete at the Olympics, the country was banished from Olympic sport for over two decades.

It is widely believed that such sporting bans helped weaken apartheid before its official abandonment in 1991. 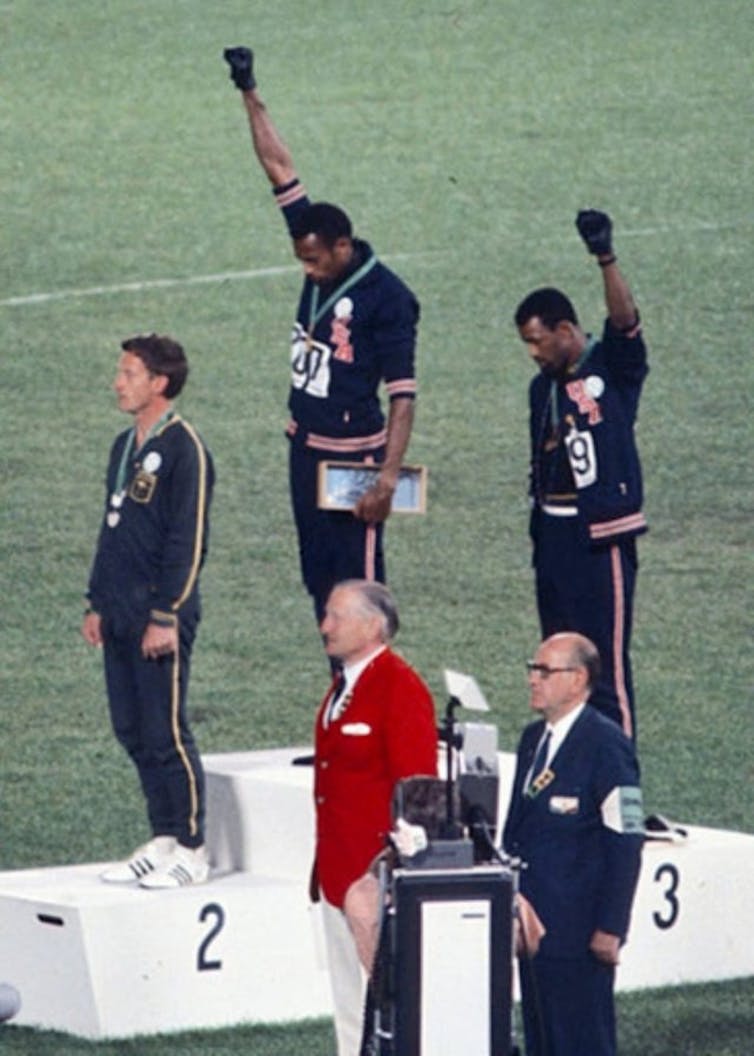 Raised fists for black power on the podium after the 200m race. Wikimedia

One of most famous Olympic images is of the raised arm, black power demonstration on the podium at the Mexico Olympics by African-American sprinters Tommie Smith and John Carlos.

They were silently supported by Australian runner Peter Norman, who was wearing an Olympic Project for Human Rights badge.

Smith and Carlos were sent home and Norman was ostracised by International and Australian Olympic authorities. He received a posthumous apology in the federal parliament. 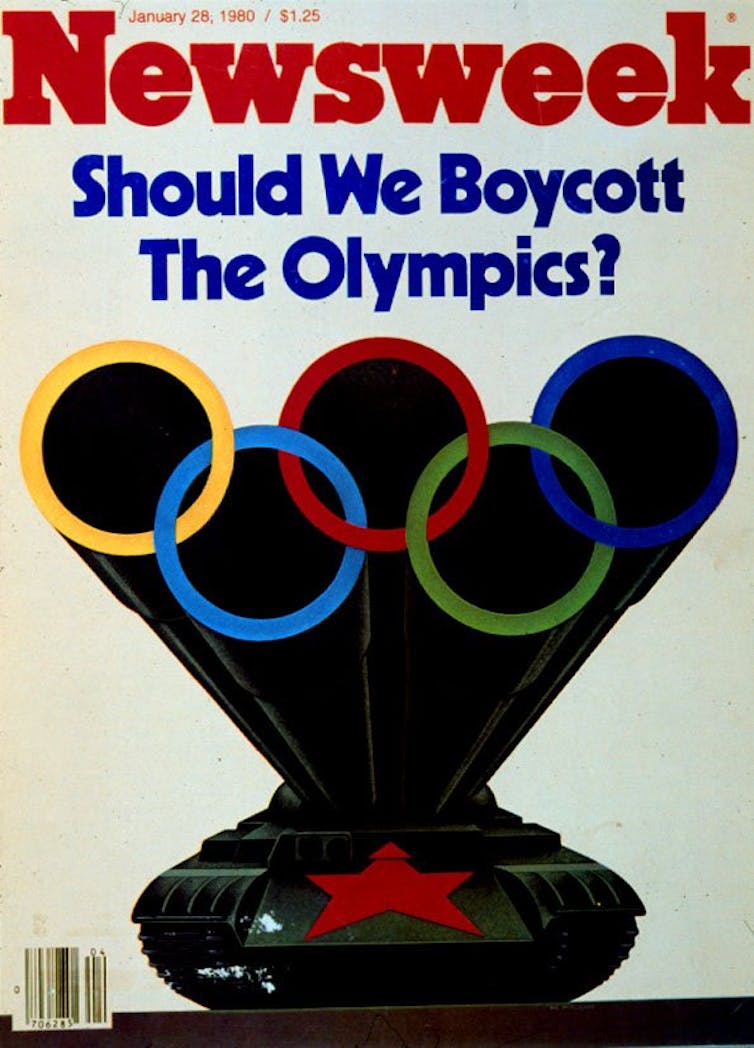 The cover of American magazine Newsweek in January, 1980.

Seven Olympics have been boycotted, but the most prominent were the tit-for-tat boycotts of the Moscow and Los Angeles games by Eastern and Western blocs after the 1979 Soviet invasion of Afghanistan.

Ironically, these boycotts were driven by nation-states, not protest groups. 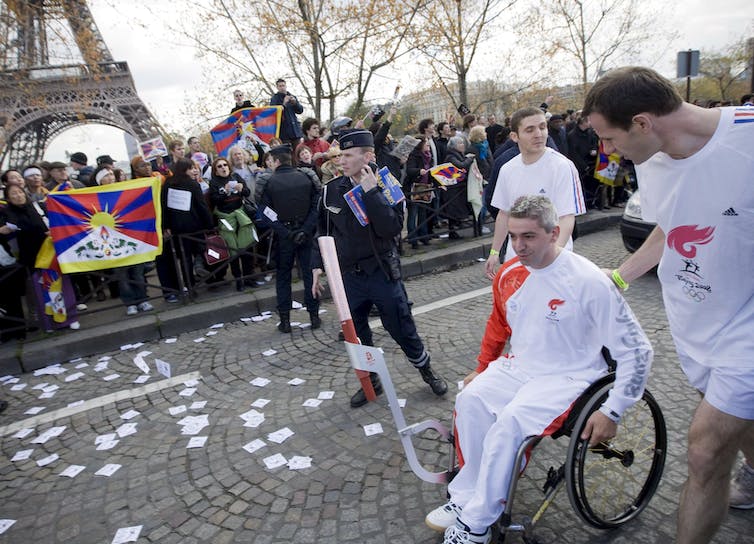 Pro-Tibet protesters as the Olympic torch was carried through Paris. Ian Langsdon/EPA

The lead up to the Beijing Olympics was marked by protests against China’s treatment of Tibet as the Olympic torch relay proceeded across continents towards the host city. This was a public relations disaster at a time when China was trying to present a more liberal face to the world.

When Vladimir Putin’s Russia was trying to improve its image via the Sochi Winter Olympics, it only drew attention to its homophobic laws and treatment of LGBTQI people. Suddenly, rainbow colours began appearing on the bodies and clothes of Olympians.

Read more: Sport, Sochi and the rising challenge of the activist athlete 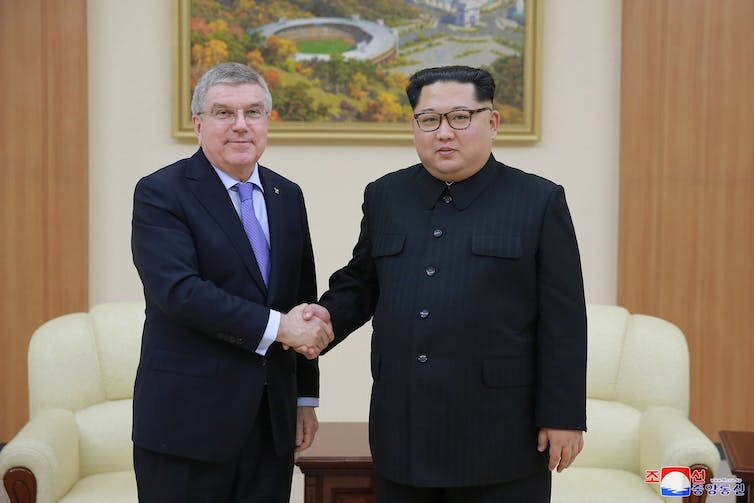 The Athletes’ Commission has expressed concern other athletes will be the main victims of those who protest alongside them.

Despite the threat of disciplinary action for protesting at the venue – including being stripped of a medal – some committed activist athletes may be willing to pay the price for taking the knee, painting their finger nails in politically meaningful colours or, like Australian swimmer Mack Horton last July, refusing to share the podium with a competitor who has been previously banned for doping.

According to the guidelines, expressing political views – which are differentiated from “protests and demonstrations” – can only take place at media conferences, team meetings and on traditional and social media. Freedom of political speech is still permitted, but not where it is closest to the action and attracting maximum attention.

At the Tokyo Olympics, climate change, racism, homophobia, refugees and other urgent political issues will weigh heavily on the consciences of athletes.

Their decisions to accept or invert political protocol will have a major bearing on how this latest chapter of the Olympic story will be told around the globe.

Will this be the silent athlete Olympics, or one where human rights voices are raised on the podium?

David Rowe, Emeritus Professor of Cultural Research, Institute for Culture and Society, Western Sydney University. This article is republished from The Conversation under a Creative Commons license. Read the original article. Be sure to sign up for Tag The Flag’s nonpartisan newsletter to have articles like this delivered directly to your inbox every weekday morning.