Answer: No, George Washington’s teeth were made from hippo ivory, brass nails, and maybe slaves’ teeth

We have all heard the tales about George Washington chopping down a cherry tree, throwing a silver dollar across the Potomac River and, of course, wearing wooden teeth.

They are all just myths, but one thing is certain: The father of our country suffered horribly with dental pain. Today, the dental profession has many ways to relieve dental pain and to replace missing teeth so that they look and feel like natural ones. Unfortunately for Washington, 18th-century dentistry could not provide the much sought-after relief from dental suffering available today.

I am a professor of dentistry who has studied the history of Washington’s teeth and have found it very interesting separating fact from fiction regarding Washington’s oral health.

The myth of the wooden teeth 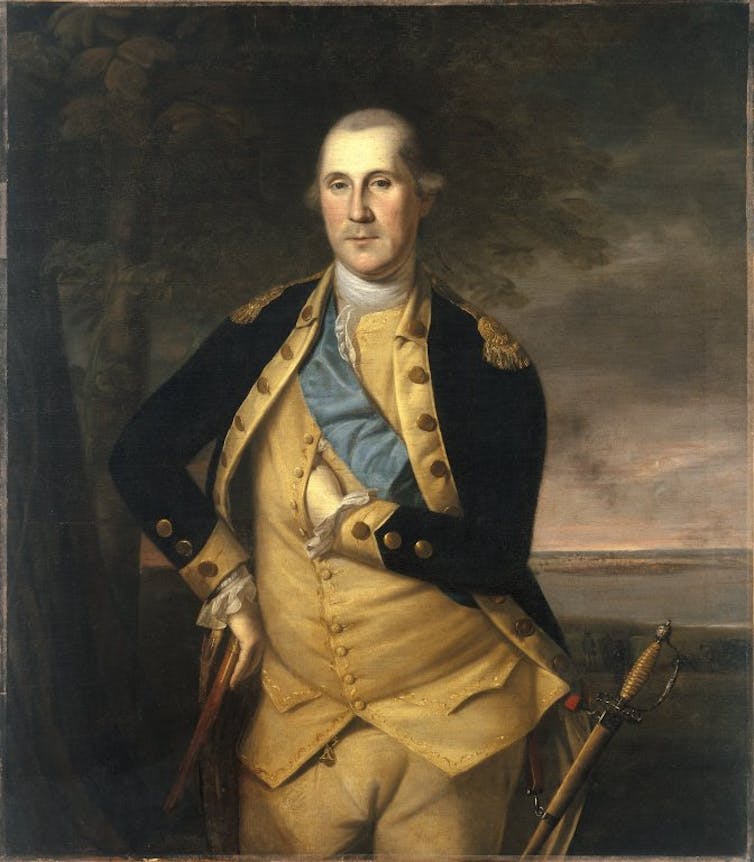 George Washington’s teeth: George Washington by Charles Willson Peale. The swollen cheek and a slightly visible scar could have been due to an abscessed tooth in the young soldier.

Washington is best remembered for his heroics against the British in the American Revolution, but he started his military career in the Virginia Militia fighting alongside the British during the French and Indian War. Washington’s dental problems likely started during this time. It was also about this time that he wrote to his brother that “I heard the bullets whistle, and, believe me there is something charming in the sound.”

But Washington had more than bullets and war on his mind. Washington at that time also wrote in his diary that he had paid five shillings to a “Doctor Watson” for the extraction of a tooth. During the war, Washington purchased dozens of toothbrushes, tooth powders and pastes, and tinctures of myrrh. Unfortunately for Washington, his dedication to his dental health did not prevent the dental suffering he would endure throughout his life.

In an attempt to both flatter Washington and thank him for liberating Boston from the British in 1776, John Hancock commissioned the great portrait artist Charles Willson Peale to produce a painting of Washington. Peale created a masterpiece that shows a scar on Washington’s left cheek, which is said to have resulted from an abscessed tooth.

Washington’s cousin, Lund Washington, served as the temporary manager of the Mount Vernon estate during the American Revolution. While George Washington was in Newburgh, New York on Christmas Day, 1782, he penned a letter to Lund.

In this letter, George Washington asked Lund to look into a drawer of his desk at Mount Vernon where he had placed two small front teeth. We do not know who the original owners of these two teeth were, but it could have been one of several slaves’ teeth that Washington purchased over the years. At this time, Washington’s dentist was Dr. Jean-Pierre Le Mayeur, who had many wealthy patients and was known for his practice of paying individuals for their healthy teeth to be used in the construction of dentures for his wealthy patients. Selling teeth to dentists was an accepted way of making money at the time.

A man of few teeth, and words 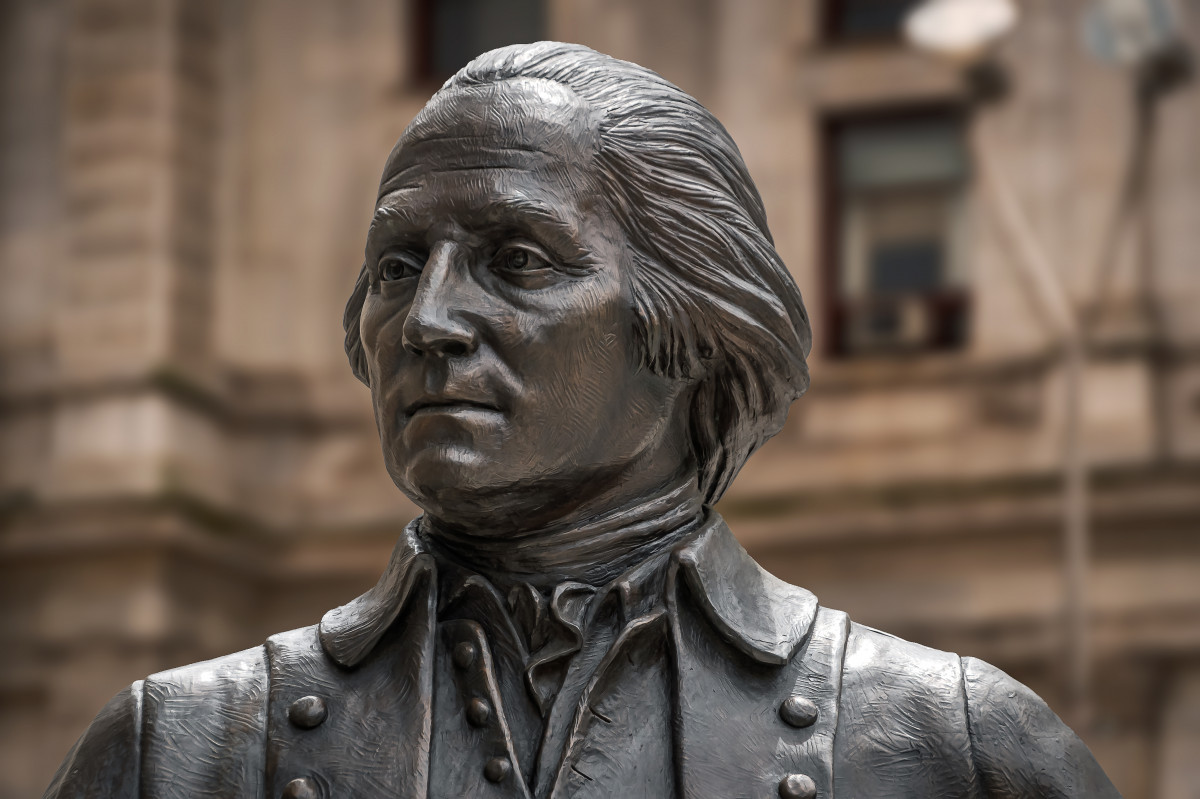 Washington’s dental health even affected his two presidential inaugurations. Washington first took the oath of office of the president of the United States on April 30, 1789 on the second-floor balcony of Federal Hall. At this time, Washington had only one natural tooth remaining.

Dr. John Greenwood was a well-known dentist who practiced in New York City. Dr. Greenwood made a denture for Washington in 1789. The denture was made from carved hippopotamus ivory, human teeth and brass nails – no wooden teeth! Dr. Greenwood made a hole in the denture so the denture would slip snugly over the one remaining tooth – his lower left first premolar – and provide some retention. This tooth would eventually need to be extracted by Dr. Greenwood, who placed this tooth into a locket attached to a pocket watch and chain. Both the locket and the denture now reside in Manhattan’s New York Academy of Medicine.

Washington was very self-conscious about his dentures and considered them to be a sign of weakness, which could be seen as a threat to the credibility of the youthful nation. So, rather than delivering the first inaugural address to the assembled masses lining the streets in front of Federal Hall, Washington retired to the privacy of the Senate chamber, where he delivered his address to the members of Congress.

On March 4, 1793, Washington delivered his second inaugural address in the Senate chamber of Congress Hall in Philadelphia, and his dentures were causing him much pain and difficulty. His speech is still the shortest inaugural address in history, lasting only two minutes and consisting of only 135 words – shorter even than Lincoln’s Gettysburg Address.

George Washington’s Teeth courtesy of the Library of Congress

Gilbert Stuart produced what would become the most well-recognized portrait of any American president to this day. Stuart, born in Rhode Island, lived in London and Dublin for 12 years, where he mastered the techniques which would produce over 1,100 portraits during his prolific career. Stuart returned to America with the intent of making his fortune by producing a portrait of the hero of the American Revolution, George Washington.

The only problem with Stuart’s ambitious plan was that he did not know Washington. However, a letter of introduction from Chief Justice John Jay led to Washington agreeing to sit for a session, in 1795, at Stuart’s Philadelphia studio. Washington’s face was sunken from the poor facial support provided by his ill-fitting dentures. Stuart placed cotton in Washington’s mouth, and the resulting portrait became known as the “Vaughan” portrait, as it was purchased by Samuel Vaughan, who was a London merchant and a close personal friend of Washington. Stuart went on to make 12 to 16 copies of the Vaughan painting, until Washington agreed to sit for another portrait.

In 1796, Washington sat for that other portrait, which became known as the “Athenaeum” portrait, a version of which appears today on the one-dollar bill. In this portrait, Stuart captured the bulge in Washington’s lips from his dentures, making his lips considerably swollen.

Myths and legends concerning all aspects of Washington’s life have become part of American lore, but even this iconic figure of American history could not escape the misery of poor dental health.

This article about George Washington’s teeth is republished from The Conversation under a Creative Commons license. Read the original article. Be sure to sign up for Tag The Flag’s nonpartisan newsletter to have trivia like this and more.