The Grand Ethiopian Renaissance Dam will bring more power to Ethiopia but is already creating tensions over water rights with its neighbors Sudan and Egypt. Tiksa Negeri/Reuters. Written by Jennifer Drake, University of Toronto

Large dams are major nation-building projects. They harness power to generate energy, provide water for large-scale irrigation and can help control flooding. And politicians often describe them as symbols of national power and technical prowess.

The early 20th century is known as the “golden age” of dam building in the United States. Between 1950 and 1979 over 40,000 dams were built across the country, mainly for hydropower and irrigation.

Today developing nations are investing heavily in large dam projects. Year over year, China creates more new hydropower capacity than the rest of the world combined. The Democratic Republic of the Congo is moving forward with plans for the US$100 billion Grand Inga Dam, which will span the Congo River and produce over 50,000 megawatts of power when complete. In Brazil, the newly constructed BeloMonte Dam will be the world’s fourth largest hydropower source when it becomes fully operational in 2019.

Ethiopia joined the ranks of large dam builders in 2011 when it launched construction of the Grand Ethiopian Renaissance Dam, or GERD, on the Blue Nile. The GERD will be the eighth largest dam in the world, measured by the capacity of its reservoir, and will create the second largest reservoir on the Nile.

The GERD is already reshaping political relationships between Ethiopia and its neighbors, Sudan and Egypt, and will have multigenerational impacts on the Nile and the people who depend on it. Ethiopia’s reluctance to engage in public review and critiques of operation and design plans, as well as Eygpt’s initial hyperbolic reaction to the project, make it hard to assess whether the GERD will have a positive or negative long-term impact in the region.

The power of the Nile

The GERD is located approximately 30 kilometers east of the border between Ethiopia and Sudan. It is currently 70 percent complete and is expected to enter operation in 2017. 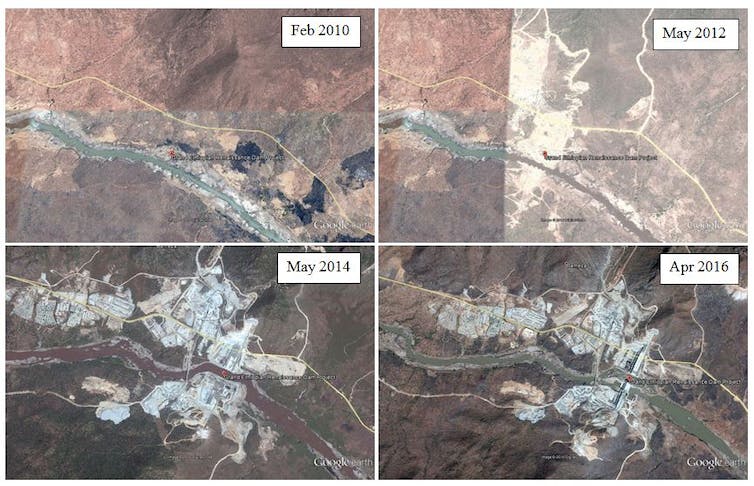 The GERD promises many benefits for Ethiopia. Today 74 percent of Ethiopians do not have access to electricity, and more than 95 percent rely on wood for cooking and heating.

The dam will have the capacity to generate 6,000 megawatts of electricity. For comparison, Hoover Dam in Nevada has a capacity of 2,080 megawatts. The World Bank estimates that Ethiopia can earn $1 billion a year exporting power from the GERD to neighboring countries.

Who controls the Nile?

The Nile is the primary water source for Ethiopia’s downstream neighbors, Sudan and Egypt. Construction of the GERD has strained relations with both countries, particularly Egypt. 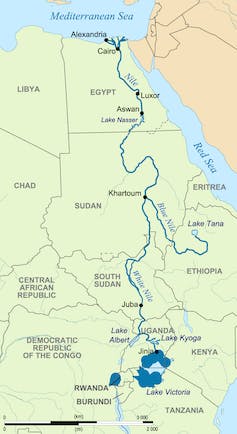 The United Nations classifies nations as facing water stress when total annual water supply per person falls below 1,700 m³. Countries that have less than 500 m³ per person per year are in absolute water scarcity. At this point they do not have enough to meet all national water demands for agricultural, industrial, domestic and environmental uses; in other words, they have a water deficit. Egypt suffers from chronic water scarcity today and is predicted to experience absolute scarcity by 2025.The Blue Nile supplies approximately 60 percent of the water that reaches the Nile, the main water source for Eygpt’s 85 million people. Egypt is extremely water-poor: it has only 20 cubic meters per person of internal renewable freshwater resources, compared to 1,258 m³ per person in Ethiopia and 8,836 m³ per person in the United States.

Ethiopia has consistently stated that it will use the GERD only to generate electric power, but Egyptian officials are concerned that Ethiopia will also draw water from the reservoir behind the dam for agricultural irrigation. This would reduce the amount of water that ultimately flows to Egypt.

Relations between Egypt and Ethiopia hit a low point in 2013, when Egyptian politicians unintentionally discussed sabotaging the GERD during a live broadcast on state-owned television. More recently, tensions have eased as the two nations have finally begun formal discussions.

In 2016, Egypt, Ethiopia and Sudan signed a declaration of principles to guide operation of the GERD. But this occurred after the dam was already designed and partially constructed, so it is unclear whether the agreement will have any significant impact.

Ethiopian leaders have taken unusual steps to fund the GERD, which is projected to cost $4.8 billion. Typically such projects are financed through Western international organizations such as the World Bank. But most financing for the GERD has come from domestic sources, including taxes, sales of government bonds to Ethiopians at home and abroad, and a national lottery. Chinese banks reportedly are providing funding for the dam’s turbines and electrical equipment. 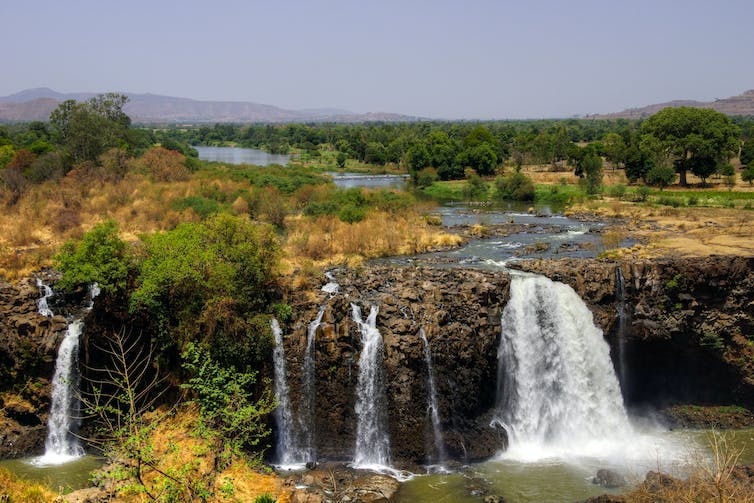 Very little information is available about the dam’s long-term environmental impacts. One assessment was published in 2015 by the Nonpartisan Eastern Nile Working Group (NENWG), a collaboration among 17 prominent water resource scholars and practitioners.

Their report identified concerns and potential risks associated with the GERD’s technical design, including structural issues and the location and capacity of release outlets. It also warned that the dam could increase the Nile’s low-flow water levels in Sudan and thus support higher rates of irrigation withdrawals for Sudanese farms. That could come at the cost of reducing the productivity of millions of hectares of farmable land in Egypt, as wastewater discharged from Sudanese farms downstream will contain more salts and be of lower quality. To address these challenges, the NENWG has called for technical collaboration between Egypt, Ethiopia and Sudan to manage water resources equitably among the three countries.

The promise and reality of dams

The GERD is a source of national pride in Ethiopia. Parallels with big U.S. hydroelectric projects are striking. At the dedication of Hoover Dam (then known as Boulder Dam) on the Nevada-Arizona border in 1935, President Franklin Roosevelt called the dam “a 20th century marvel” that would benefit the entire nation. Similarly, at the announcement of the GERD project in 2011 the late Prime Minister Meles Zenwai called the project “an expression of our commitment to the benefit of all the countries of the Nile Basin.”

But African nations need only to look at the history of large dam construction to see what kind of damage can occur if water resources are not managed well.

The Colorado River, which flows through Hoover Dam and 15 others in the western United States, once emptied into the Pacific at a lush, green delta in northern Mexico. But dams and diversions have removed so much water from the river that now it ebbs to a trickle in the Mexican desert, leaving its former delta dry and parched. Scholars have documented harmful environmental impacts from large dams in many other countries, including Australia and Brazil. 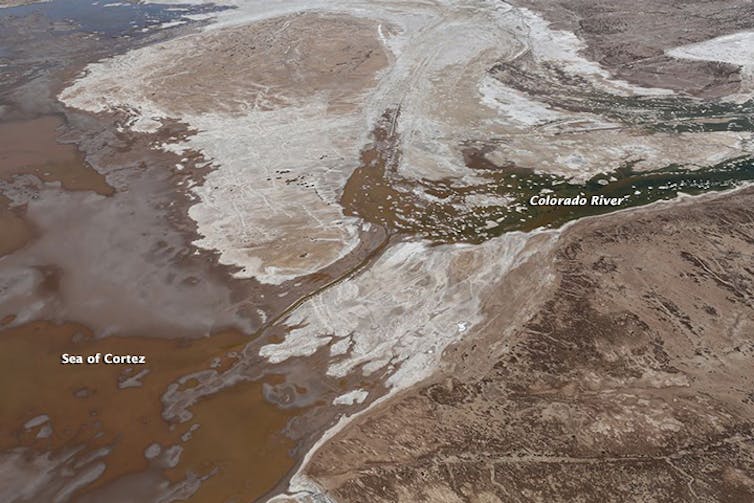 The Colorado River reaches the Sea of Cortez in 2014 for the first time in 16 years after a planned release of water from a dam near the U.S.-Mexican border to imitate spring floods of past years. NASA Earth Observatory

Understandably, countries like Ethiopia expect great benefits from dams. But they could profit from studying the impacts of dams in other countries to find ways of using water resources sustainably to benefit their people.

Jennifer Drake, Assistant Professor of Civil Engineering, University of Toronto. This article is republished from The Conversation under a Creative Commons license. Read the original article. Be sure to sign up for Tag The Flag’s nonpartisan newsletter to have articles like this delivered directly to your inbox every weekday morning.