I have always been intrigued by Thanksgiving – the traditions, the meal, the idea of a holiday that is simply about being thankful.

For my family, Thanksgiving is all about the food. Some foods, like turkey and mashed potatoes, may be familiar. But there are a few twists. Since I grew up in the Caribbean, I’m allowed a Caribbean dish or two. The reliability of the menu – with a little flexibility sprinkled in – seems to unite us as a family while acknowledging our different cultural backgrounds.

Yet despite this adaptability, there’s a core part of the meal that almost everyone embraces. How did this come to be? Although few appreciate it, advertisers have shaped the meal as much as family tradition. 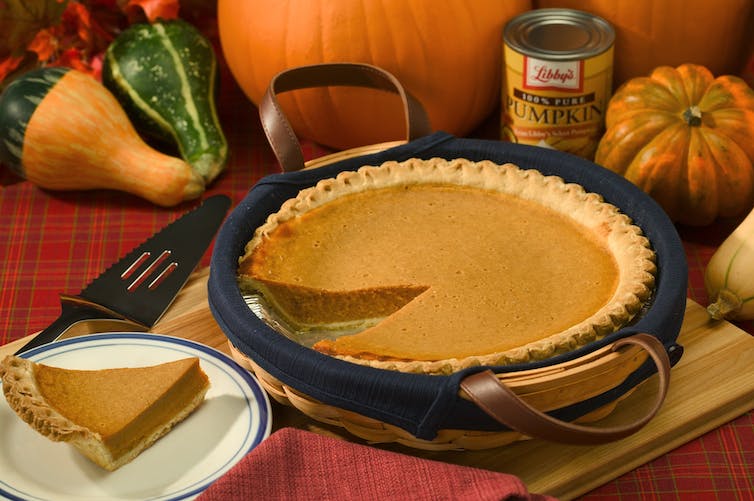 Libby’s continues to fiercely compete with pumpkin pie peddlers Borden’s, Snowdrift and Mrs. Smith’s for a place on the Thanksgiving table. Jean Beaufort

When Sarah Josepha Hale, the editor of Godey’s Lady’s Book, first advocated for Thanksgiving as a national holiday in 1846, she argued that it would unify the country. In our research, my colleagues and I have been able to show that Hale’s vision for the holiday has been largely fulfilled: Inclusivity of people and traditions has been Thanksgiving’s hallmark quality.

A reason for its broad appeal is that it lacks any association with an institutionalized religion. As one interviewee told us, “There is no other purpose than to sit down with your family and be thankful.” And after interviewing a range of people – from those born in the U.S. to immigrants from countries like South Africa, Australia and China – it became obvious that the principles and rituals they embraced during the holiday were universal no matter the culture: family, food and gratitude.

But as a relatively new holiday – one not tied to a religious or patriotic tradition – a shared understanding of the celebration and the meal is crucial to ensure its long-term survival.

While there might be subtle variations, the Thanksgiving meal is the lodestone of the holiday, the magnet that brings people together. Today, familiar items constitute the meal: turkey, cranberry sauce, stuffing, gravy, alcohol, salad, apple pie and pumpkin pie. Many of our interviewees tended to serve some version of this list.

But why these items and not others? What makes turkey, cranberry sauce and pumpkin pie so special? My colleagues and I studied 99 years of Thanksgiving ads in Good Housekeeping magazine to find out.

Starting with Thanksgiving’s early champion, Sarah Josepha Hale, the history of Thanksgiving is rooted in marketing. Marketers not only helped create many of the rituals and cultural myths associated with the Thanksgiving meal, but they also legitimized and maintained them. 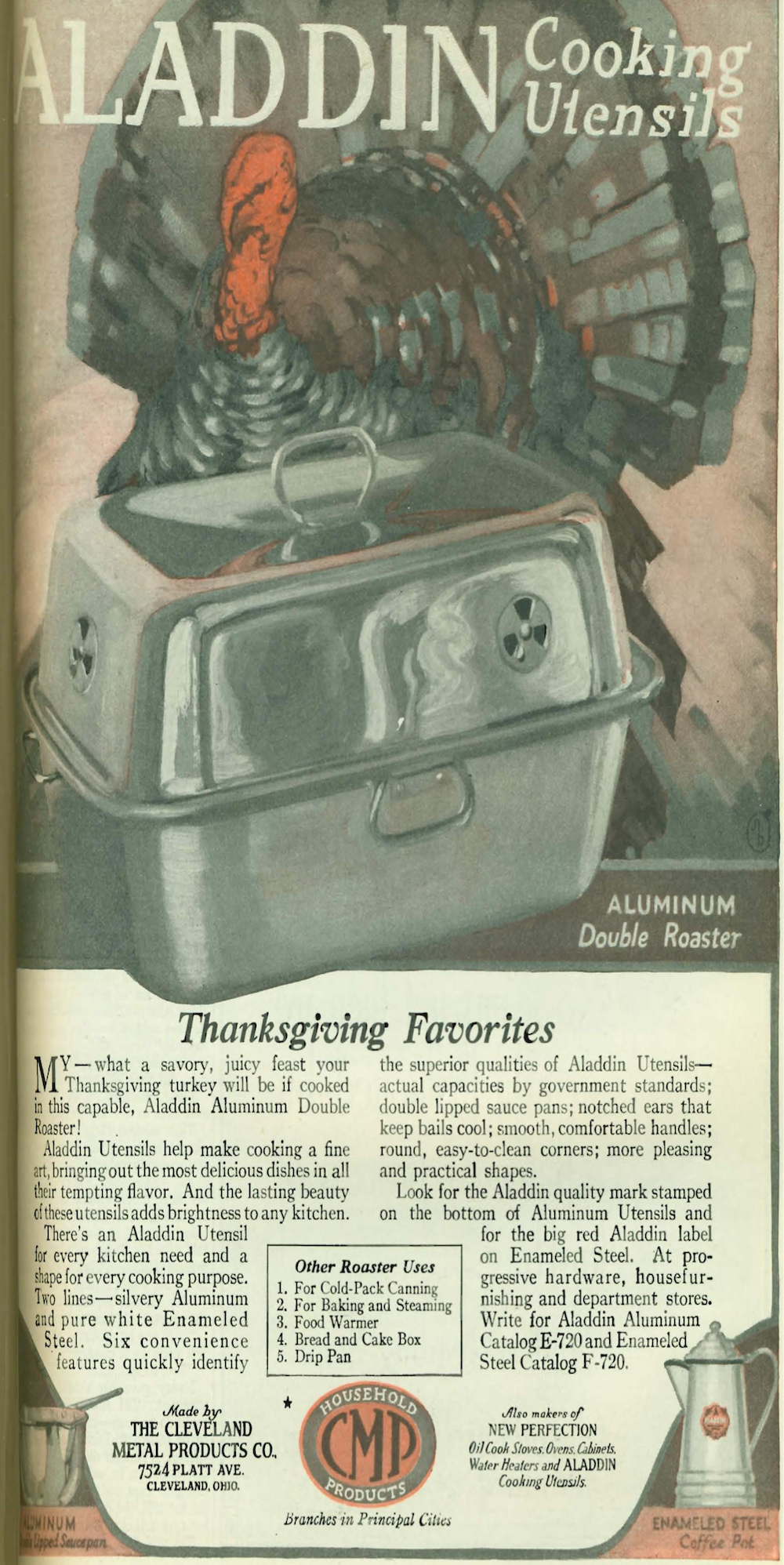 But by the 1920s, turkey had become the only meat advertised. Early ads would focus on how to prepare and present the perfect bird, promoting branded tools like roasters, ranges, pop-up thermometers and oven-cooking bags.Initially, the Thanksgiving turkey competed with other meats, like duck, chicken and goose, for centerpiece at the Thanksgiving table.

Iconic Swift’s Premium turkey ads focused on the sacredness of the meal by featuring families at prayer, giving thanks before the meal begins. The importance of the turkey to the Thanksgiving celebration dominates, helping to perpetuate the Thanksgiving turkey tradition.

Meanwhile, early ads for the Eatmor Cranberry Company positioned their whole cranberries as a perfect complement to any and all Thanksgiving meat dishes. This brand dominated until the 1930s when another brand, Ocean Spray, entered with its canned gelatin cranberry sauce. 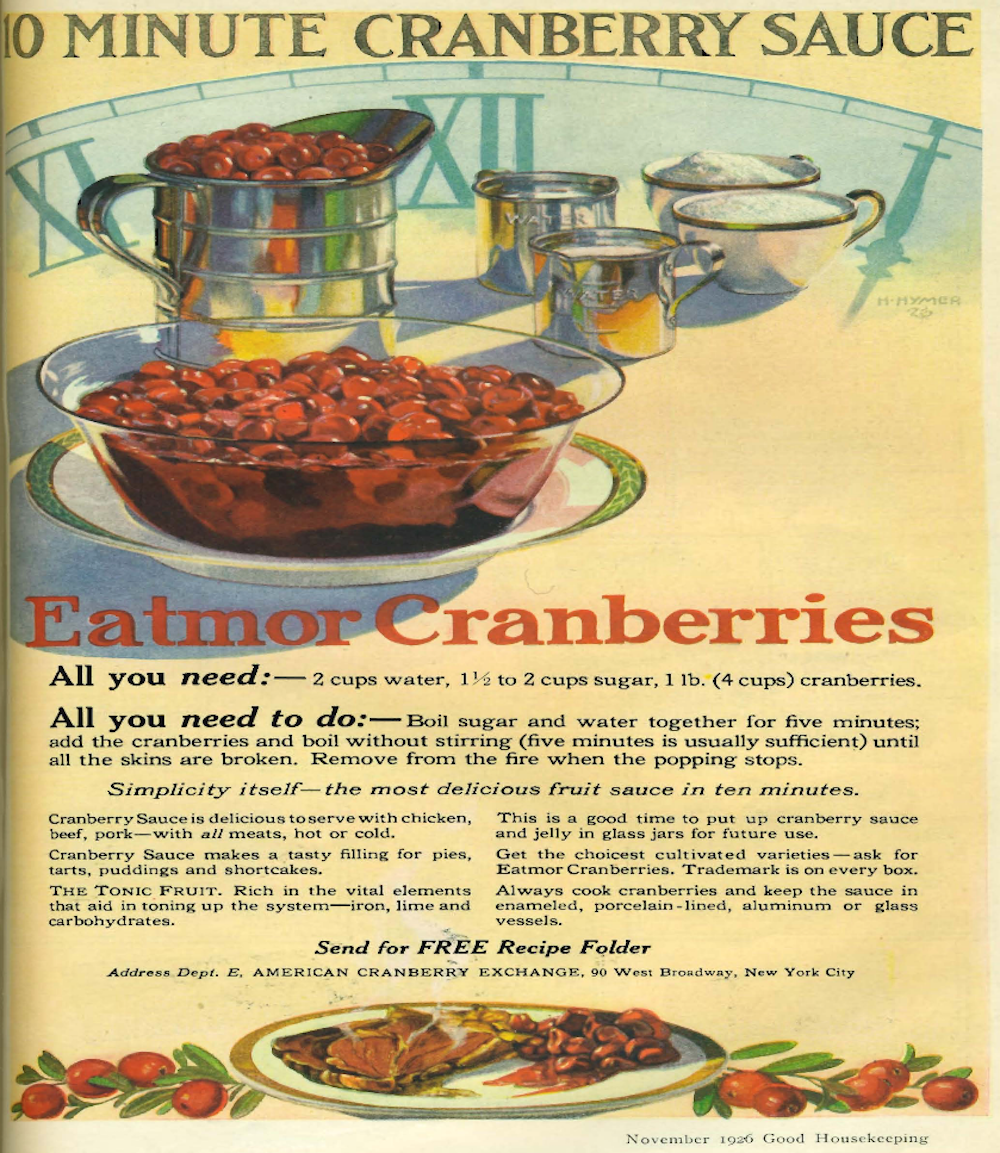 Considered by many to be the quintessential Thanksgiving dessert, pumpkin pie also wasn’t present at the first Thanksgiving meal. (The Pilgrims lacked the butter, wheat flour and sugar to make the pastry.) Nonetheless, beginning as early as 1925, a range of brands – for example, Borden’s, Snowdrift, Mrs. Smith’s and Libby’s – have competed fiercely to connect pumpkin pie to the season, the holiday and the meal. It’s a rivalry that continues to this day.Ads for both brands implied that cranberry sauce has been around since the first Thanksgiving dinner, which was highly unlikely. However, the brand positioning war successfully promoted cranberry sauce as the natural condiment for the Thanksgiving turkey. Ocean Spray would triumph and, to this day, promotes whole cranberries and canned gelatin.

The role of the consumer

Not every product category or brand succeeded in becoming a core part of the Thanksgiving meal.

But those early 20th-century ads for turkey clearly resonated: Today, nearly 88 percent of U.S. households have turkey on Thanksgiving, and approximately 20 percent of the turkeys consumed in any given year are consumed at Thanksgiving. This is a testament to the enduring influence of marketing on the holiday. For brands like Butterball (formerly Swift’s Premium), Thanksgiving is big business.A Welch’s ad from the 1960s implies that the first Thanksgiving meal included juice made from grapes. In 1928, Diamond marketed their walnuts as an accessory to dress up Thanksgiving dishes. Despite vociferous ad campaigns, few associate Welch’s grape juice or Diamond walnuts with Thanksgiving today. 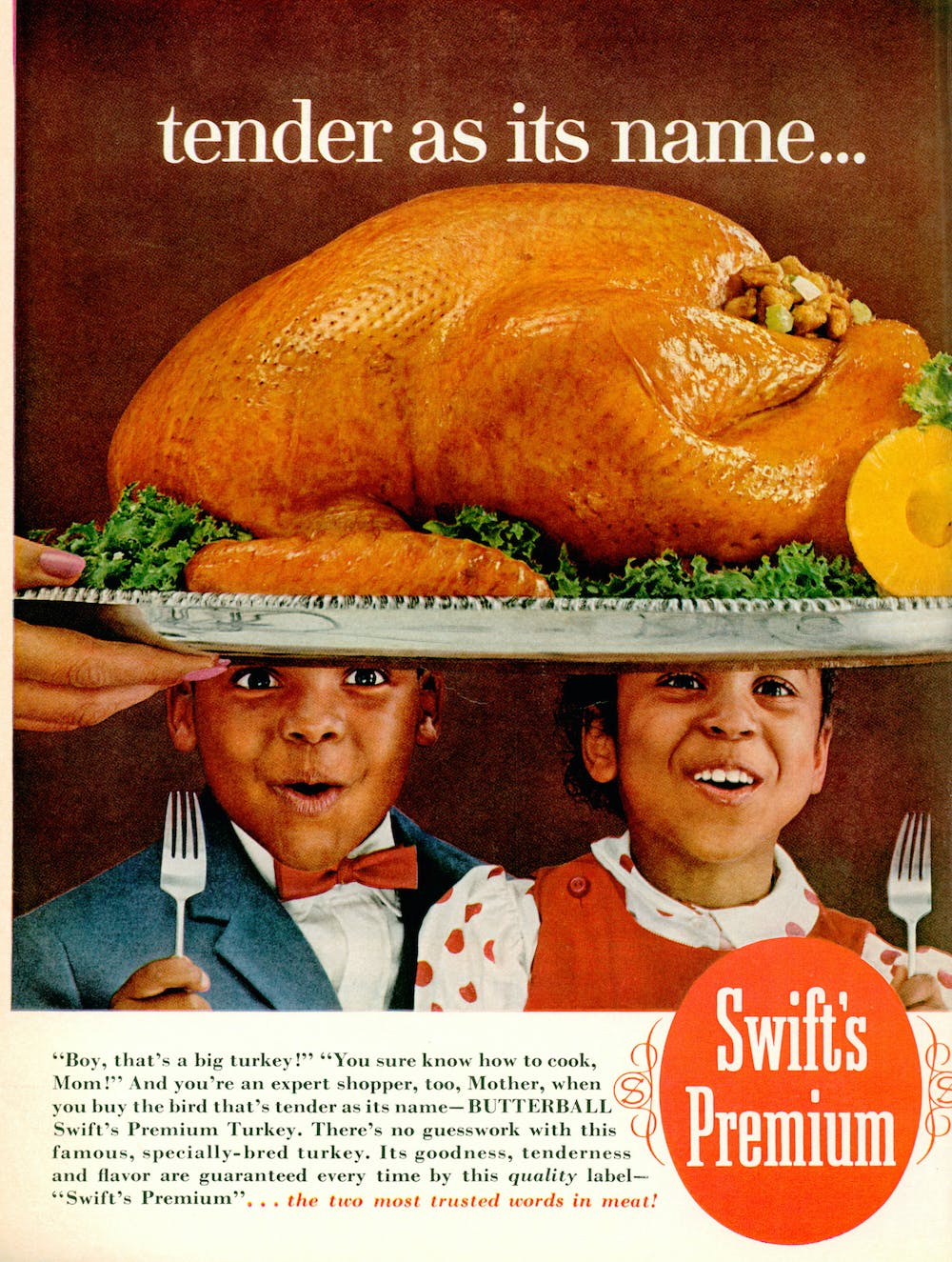 Whether you’re a turkey fan or not, prefer apple pie to pumpkin pie, enjoy canned gelatin over whole cranberry sauce, by celebrating Thanksgiving, you play a role as well. Marketers may have shaped many of the rituals of the holiday. But all Americans – from all backgrounds – certainly do their part to maintain them.

After all, brands need customers to survive.

Samantha N. N. Cross, Associate Professor of Marketing, Iowa State University. This article is republished from The Conversation under a Creative Commons license. Read the original article. Be sure to sign up for Tag The Flag’s nonpartisan newsletter to have articles like this delivered directly to your inbox every weekday morning.