US history is filled with instances where one partisan side charges that the other side’s positions will lead to national ruin. Now, both sides accuse the other of betraying their country. By: Jeffrey Selinger, Bowdoin College. Cover: Shutterstock

President Trump is working with the Russians to enrich himself. The Republican Party is shielding him from accountability.

The Democrats want to win elections by repopulating the country with foreigners. Then they’ll be able to permanently transform the racial and cultural makeup of American society.

These are versions of stories told by, first, Democrats, and second, Republicans. Let’s set aside the merits of these stories – at least for the moment (I know, it’s not easy to do!).

These stories are, essentially, allegations of disloyalty. And they foretell national ruin if the other side achieves its goals.

I teach and study U.S. politics and I have researched the way partisans in America argue about major issues.

American history is filled with examples where one partisan side alleges that some idea embraced by the other side threatens to compromise American national strength or sovereignty – and even threatens the existence of the country.

But it’s unusual to see what is happening in America today.

Now, it’s not just one side of the partisan divide accusing the other of disloyalty and disdain for American safety and values. It’s both sides. One need look no further than the cable news networks for evidence of how entrenched this form of partisanship has become.

It turns out that the way partisans debate has an impact on how Americans view democracy itself.

So what does it mean to America that both sides are accusing each other of betraying their country? 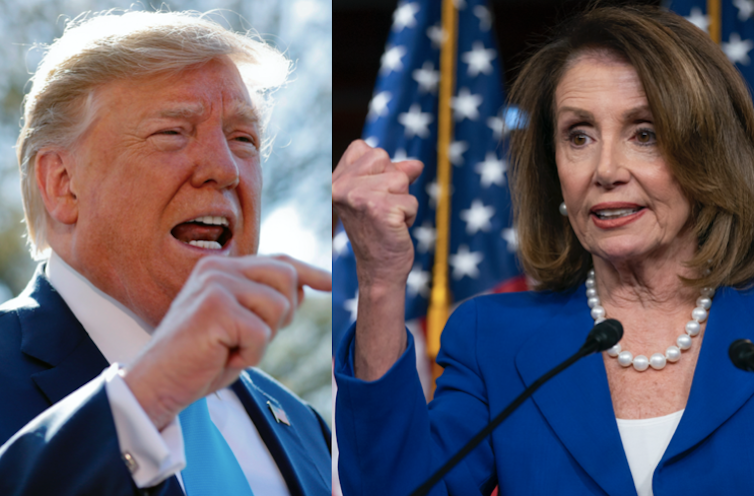 As I discuss in my book, “Embracing Dissent: Political Violence and Party Development in the United States,” it was common in the past for accusations of disloyalty to be lodged by partisans.

For example, during the Civil War, the principle that “every Democrat may not be a traitor, but every traitor is a Democrat” was a familiar refrain in the Republican North.

During the Cold War, Republicans questioned whether Democrats were sufficiently anti-communist to protect the country.

Democrats often responded to these attacks, both in the 19th and 20th centuries, in a cautious and defensive manner.

Instead of counter-attacking, Democrats often tried to change the subject by focusing public debate on other issue areas. In many cases, Democrats attempted to defend themselves by echoing the positions and talking points of their more nationalistic rivals.

Similarly, in American political history, when accusations about loyalty to America erupted, it’s usually been one-sided. The “accused” side remains on the defensive, protesting its commitment to the country without advancing an accusatory counterclaim.

This pattern tends to consolidate public opinion. One party accuses, the other denies, but both sides publicly appear in relative agreement about the nature of the national threat.

In the aftermath of the Sept. 11 attacks, Republicans labeled Democrats as “soft” on terrorism and claimed that their reluctance to increase the number of troops committed to the wars in Iraq and Afghanistan would “embolden” America’s enemies.

Democrats backpedaled in response. They asserted that they too were committed to fighting terrorism, but that they would use a different approach to address this threat.

Both sides then – and now

In my research I found that the partisan politics of the 1790s featured a pattern of mutual recrimination that is comparable to today’s polarized political debates.

Federalists who supported George Washington’s presidency accused the new party in opposition, the Jeffersonian Republicans, of advancing the French revolutionary cause.

Jeffersonian Republicans alleged that if Federalist leaders had their way, the U.S. would be recolonized by the British.

During this period, there were few policy disputes that were considered safe from these incendiary suspicions. Disputes ranging from trade and immigration to fiscal and monetary policy all seemed to trigger accusations among partisans that their rivals were under the spell of foreign interests and ideas.

As a new generation of partisan newspapers took center stage, the media abetted the conflict. A rising class of “printer-editors” forged new partisan channels for the circulation of political news. These printer-editors expanded their newspaper readership by increasing coverage of political scandals and public controversy. Sound familiar?

Many of the leading political controversies conveyed in the partisan press of the 1790s, moreover, stirred up apocalyptic fears. Partisan opponents accused each other of national disloyalty. They said the republic would be irreversibly damaged if their opponents were not stopped. 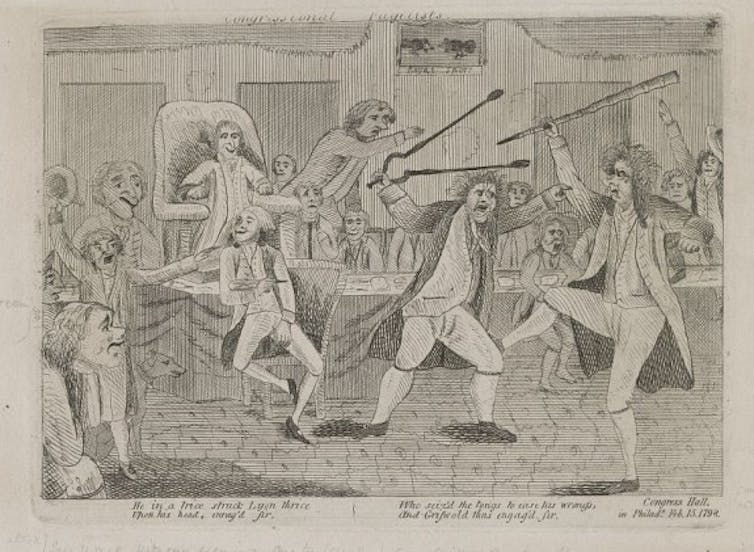 Partisans conceive of irreparable consequences in different ways. The idea of surrender to a hostile foreign power is one way of envisioning national ruin. Partisan accusations in the 1790s that the other side would submit to the control of Great Britain or France fit this pattern. The Cold War accusation that left-leaning Americans took orders from the Kremlin followed a similar logic.

Today’s version of the foreign influence accusation is the alarm raised in recent months by many of Trump’s critics that President Trump may have been under Vladimir Putin’s thumb.

Contemporary conservatives are focused on a different national security threat – and a different partisan culprit.

Liberal Democrats, they argue, are hellbent on repopulating the country with “Third World foreigners.”

Such accusations often include reference to the problem of permeable borders. This is the belief that an otherwise whole or united country will be penetrated by foreign gangs and other “bad hombres,” in the president’s phrase.

Apocalyptic narratives raise the stakes of partisan disputes. They induce opposing sides to dig in when engaged in public negotiation. They also deny the legitimacy of their opponent’s participation in the political process.

Without a shared understanding of the opposition’s legitimacy, political competitors treat one another like enemies. This doesn’t necessarily lead to political violence or civil war.

This pattern of debate does, however, come with a key drawback.

The resulting maelstrom of suspicion and distrust undermines the standing of professionals in vital fields like science and journalism and in institutions like the courts, the military and intelligence agencies. Experts, in this context, can’t be completely apolitical, impartial and above the political fray, can they? After all, if politicians of the opposing party can’t be trusted, then their allies in other institutions can’t be either.

It may not be evident to partisans in the thick of the fight, but apocalyptic narratives alter the hopes and aspirations Americans have for democracy itself.

Should Americans hope for a politics that allows for compromise and mutual adjustment? Or is democracy little more than a forum where rivals draw lines in the sand and hurl recriminations at one another?

Should Americans expect and accept a political process that yields incremental policy change over time? Or does the republic face challenges so great that nothing short of a dramatic course correction will suffice to save the country?

Much depends on the nature of issues that are up for debate. But much also depends on how Americans choose to debate them.

Jeffrey Selinger, Associate Professor of Government, Bowdoin College. This article is republished from The Conversation under a Creative Commons license. Read the original article. Be sure to sign up for Tag The Flag’s nonpartisan newsletter to have articles like this delivered directly to your inbox every weekday morning.