Should the Trump administration succeed in establishing a Space Force or something like it, the move may have serious consequences for NASA. By Wendy Whitman Cobb, Cameron University. Cover: NASA on Unsplash

Space, that final frontier, is something that catches the attention of a country naturally inclined to believe in ideas like “Manifest Destiny” and American exceptionalism. But how well does a Space Force fit that bill? And would a Space Force reignite a military space race and fuel diplomatic tensions with China and Russia?

Growing up in Florida, I was lucky enough to watch space shuttle launches with something that resembled regularity. As I got older and first learned about the history of NASA, its exploits during the Space Race and then its challenges, I never lost the sense of wonder at what NASA could do. I also gained an appreciation for the difficulties it had to overcome in order to reach those achievements. I’ve turned this interest into an academic career studying the politics of space, science and medicine.

NASA’s influence is clearly seen in these other fields as well as in our everyday lives. Technologies developed to allow space exploration have led to such consumer innovations as scratch-resistant lenses and CAT scans. Our cellphones would not be possible without the miniaturization of chips during the Apollo program or military GPS satellites. Given these benefits, we often forget the difficult nature of spaceflight and the resources required to accomplish it.

Indeed, examining the experiences and political lessons of NASA reveals the difficulties of establishing a new government agency and launching an organization whose job is to do hard things at a high cost. Looking at the ups and downs of NASA’s history shows us that there are potential benefits domestically but that they could come with greater international risk.

What is a Space Force, and what would it do anyway?

While at a rally in March this year, President Donald Trump first mentioned the idea of a Space Force. Since then, the president has both tweeted about the idea and directed the Pentagon to develop a plan to create an independent sixth branch of the military. Responding to the president’s directives, the Pentagon released a report in August. Although the report was labeled as “final,” its 15 pages are short on detail, long on talking points, and light on details on why there needs to be a Space Force. 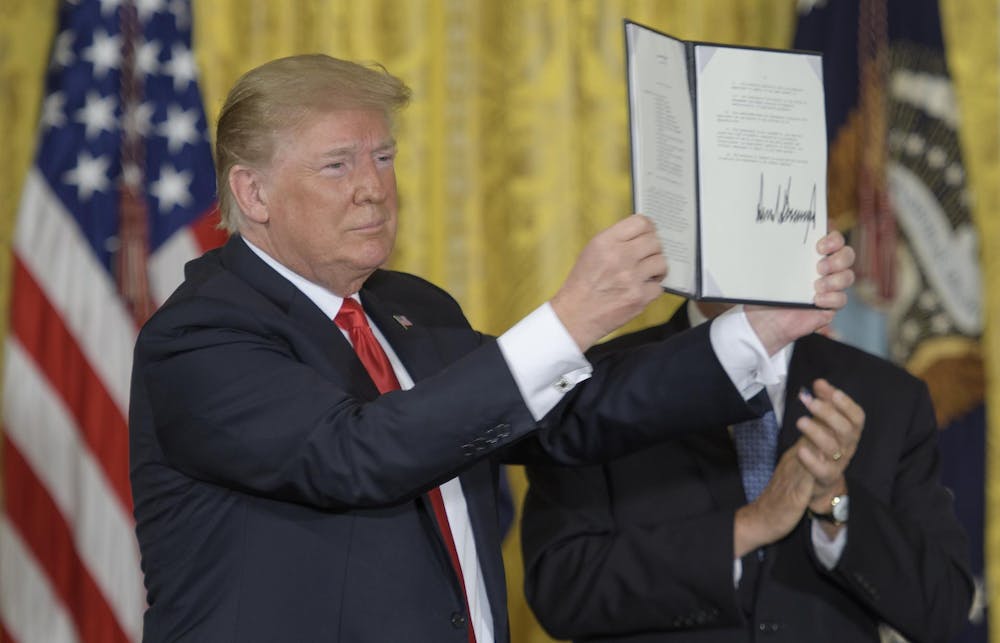 President Donald Trump holds up Space Policy Directive-3 after signing it during a meeting of the National Space Council, June 18, 2018, in Washington. The council’s role is to advise the president regarding national space policy and strategy, and review the nation’s long-range goals for space activities. By NASA/Bill Ingalls

The focus on space was also apparent in the National Security Strategy released in December 2017 and the National Space Strategy released in March.The White House and Congress have been considering the idea for some time. During the debate over the 2017 National Defense Authorization Act, members of the House Armed Services Committee inserted a provision establishing a “Space Corps.” The proposed Space Corps was to be housed within the Air Force but the provision was later removed during House-Senate negotiations because of objections from both the White House and Secretary of Defense James Mattis. Although he has expressed support for a Space Force now, Mattis originally opposed it over budgetary and overhead concerns.

Beyond tweets and mentions, the White House has not, in my opinion, made a compelling case for why such a force is needed. The Pentagon report, which supposedly lays its foundation, states that “potential adversaries are now actively developing ways to deny our use of space in a crisis. It is imperative that the United States adapts its policies, doctrine and capabilities to protect our interests.”

The military roots of space exploration and NASA’s early lessons

To say that military and space are intertwined is an understatement. Satellites provide civilian communications but also do the same for military units. Space analysts call this “dual-use” and it is also what makes it so difficult to separate peaceful, civilian activities from military ones. 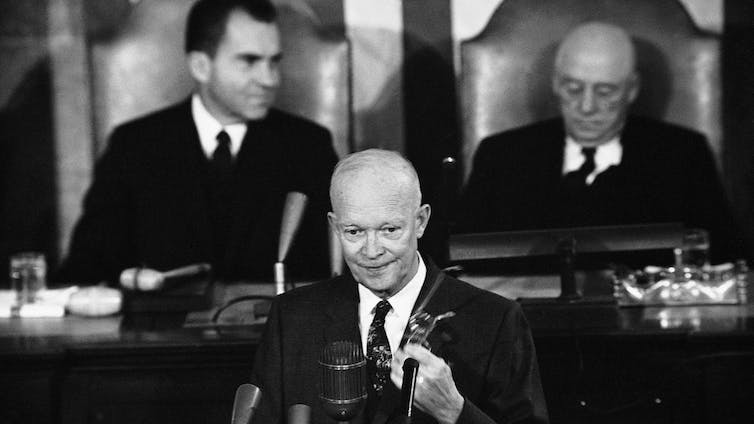 President Eisenhower addressing a joint session of Congress in 1958. Behind the president are Vice President Richard Nixon, left, and Speaker of the House Sam Rayburn, right. NASA

The military and civilian roots of space exploration are bound up tightly with one another. When the Soviet Union launched Sputnik in October of 1957, it set off a panic in the United States about the capability not of the Soviets to explore space, but about their ability to launch deadly attacks on Americans. Thus, the Space Race was born not out of a desire to peacefully explore space, but Cold War politics.

President Dwight Eisenhower, careful not to read too much into the Soviet abilities, was cautious in responding to the threat. Although Eisenhower initially wanted the space effort to be run by the military, he was persuaded to create a more open, civilian space program in part to lessen “attention on U.S. national security space efforts.” Legislation creating NASA was passed in 1958 with NASA opening its doors Oct. 1 of that year.

There are two lessons to be taken from NASA’s establishment and early history. First, it was an agency born of a crisis. The United States was seemingly falling behind its Cold War adversary and the public demanded that the government respond. Crisis often precedes the establishment of new government agencies and provides those agencies with a base of public and political support.

In terms of a Space Force, there is no apparent crisis. We know that both Russia and China have been developing military capabilities in space. China first tested an anti-satellite weapon in 2007 and more recently, Russian satellites have been demonstrating new capabilities. There are most likely other military activities in these states, and perhaps others, they have undertaken that remain classified. If this is the case, then I believe the administration needs to lay a stronger foundation for why a Space Force is needed because lacking a crisis, support is often hard to come by. 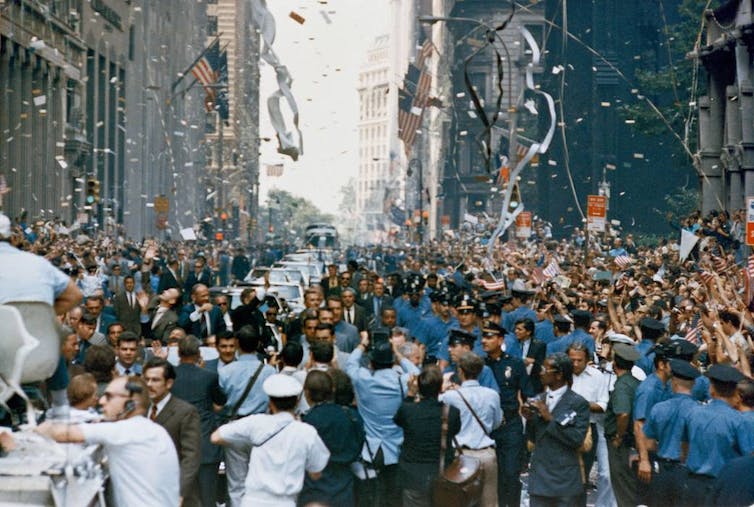 New York City welcomes the Apollo 11 crew in a ticker tape parade down Broadway and Park Avenue. Pictured in the lead car, from the right, are astronauts Neil A. Armstrong, Michael Collins and Buzz Aldrin. The three astronauts teamed for the first manned lunar landing, on July 20, 1969. NASA

A second, and related, lesson is in terms of public support. Although Americans tend to remember the space programs of the 1960s favorably, public support for NASA began to fall in the early 1960s and as Roger Launius, a NASA historian, writes, the data “do not support a contention that most people approved of Apollo and thought it important to explore space.” Along with this came a drop in funding that left NASA scrambling in the late 1960s to accomplish Kennedy’s goal of landing a man on the moon by the end of the decade. Studies of public opinion often demonstrate a “thermostatic” relationship between public opinion and funding.

Consequences of a Space Force for NASA and militarization of space 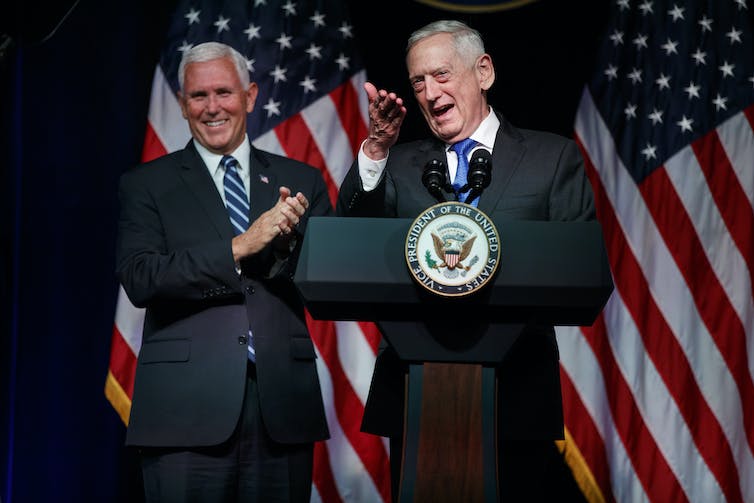 Should the Trump administration succeed in establishing a Space Force or something like it, the move may have serious consequences for NASA. Depending on its mission, the Space Force is likely to require launch capabilities for satellites and perhaps human missions. Although a Space Force may be able to purchase these services from companies like SpaceX, if they choose to develop an in-house launch system, they may duplicate already existing NASA efforts. Doing so would also likely cause a brain drain at NASA as in-house engineers and experts migrated to the Space Force with promises of new missions and new funding.

There is also a question of whether the Space Force may simply take over current NASA missions. In the wake of the Space Force announcement, the Trump campaign sent out an email to supporters asking them to vote on a potential logo. Although this was a fundraising maneuver, one of the “logos” was themed around Mars with the wording “Mars Awaits.” Given that the overall mission of the Space Force remains unclear, there could be a push for human spaceflight efforts to be subsumed under a Space Force. NASA’s recent failures in the development of the Space Launch System, or SLS, and the James Webb Space Telescope only further reinforce the image of a NASA spread too thin to accomplish major space endeavors.

Finally, NASA’s budget is already quite low considering its mission: US$19.7 billion in 2017 with $19 billion requested for 2018. This represents less than 0.5 percent of the overall federal budget. A Space Force could feasibly take away funding from NASA, especially for the development of human spaceflight capabilities thus cannibalizing NASA’s already low budget.

In terms of geopolitics, establishing a Space Force could create a point of no return in of militarization of space. From Eisenhower onwards, U.S. policymakers have avoided the appearance of overt military influence in space. Both the United States and the Soviet Union joined the 1967 Outer Space Treaty, which stipulated, among other things, the peaceful use of outer space and a ban on nuclear weapons. Following the Space Force announcement, Russian officials warned about potential violations of the treaty and that Russia might choose to withdraw from the treaty if the U.S. did.

Joan Johnson-Freese, a space policy expert, warns in her recent book that the pace of American militarization of space has been increasing, perhaps to the point of no return. Her warning is that policymakers think about further actions before stepping into an arms race for which no one is prepared. While President Trump has certainly shaken up America’s relations with other countries, such a drastic change in American posture could have significant and irreversible effects, creating a second space race. While it could have benefits for American society much as the original space race did, this time, I believe the dangers are likely to be far higher.