When the Hoover Dam was finished in 1936 it was hailed as an architectural and engineering feat for the United States. What wasn’t being cheered, however, was the state of the union as a whole, as the U.S. economy was in the depths of the Great Depression. In the eyes of the public, America’s 31st President, Herbert Hoover was the man responsible for the country’s decay. After taking office in 1929, the U.S. economy immediately plummeted, and while his predecessor’s policies certainly didn’t set a strong foundation, he was the one left holding the bag.

President Herbert Hoover and official party in Tunnel No. 2 during an inspection tour of Boulder Canyon Project.

Needless to say, the people of the United States weren’t extraordinarily pleased when Secretary of the Interior, Ray Lyman Wilbur, somewhat surprisingly declared the structure, “Hoover Dam” in a speech on September 17, 1930. As described by PBS, “Wilbur journeyed to the Nevada desert to drive the spike marking the project’s official start. Sweating profusely through his inappropriate wool suit, Wilbur announced:

“I have the honor and privilege of giving a name to this new structure. In Black Canyon, under the Boulder Canyon Project Act, it shall be called the Hoover Dam.”

In short, Wilbur named the dam after his boss and the decision was met with a great amount of pushback. “The naming of a momentous public works project in his honor was seen by many as bald-faced public relations and little more. Even after Wilbur’s proclamation, the dam was referred to in the press by both names, but it was called Hoover in all official documents and congressional appropriations bills.”

Drillers on the construction of Hoover Dam.

According to Mental Floss, “Wilbur’s successor, Harold Ickes, was a particularly vocal critic, and in 1933 he switched the in-progress structure’s name to “Boulder Dam.” It wasn’t until 14 years later that President Harry Truman ultimately signed a law which ended the nebulous naming convention, and officially cemented it as “Hoover Dam”. 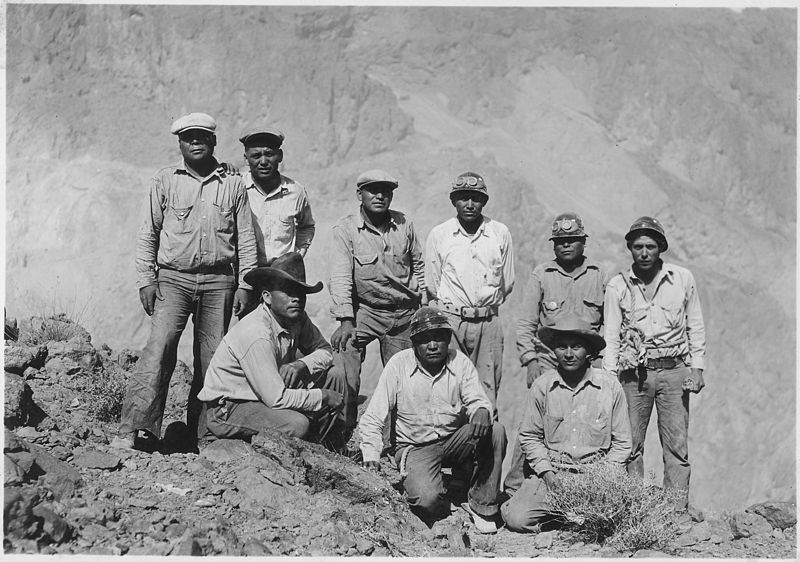 Indians employed on the construction of Hoover Dam as high-scalers. This group includes one Yaqui, one Crow, one Navajo and six Apaches.