Theodore Roosevelt addresses a crowd of suffrage delegates from the porch of his home at Sagamore Hill in 1917.

There is now less than a year to go until the next Presidential election. Democratic presidential candidates will be battling it out across the country discussing everything from healthcare to climate change. President Trump will be making his push to convince the American public that he should remain in the White House for four more years, inking his name into the history books. Speaking of ink, while we watch the election cycle unfold, we thought it might be interesting to look into a much more important question: have any presidents ever had tattoos? It turns out that five U.S. presidents are rumored to have had tattoos while one President actually officially did wear some ink on his body.

According to Reference, “Presidents Theodore Roosevelt, Franklin D. Roosevelt, James K. Polk, Andrew Jackson, and Dwight D. Eisenhower were all rumored to have tattoos. Theodore Roosevelt was the only president to have a confirmed tattoo on his body.” Teddy Roosevelt kept it simple and had his family crest tattooed on his chest. It makes sense that the leader of the Rough Riders wasn’t afraid of a little body modification in the form of a tattoo. To this day Teddy Roosevelt remains the youngest person to become President of the United States. He was a leader of the Progressive movement, and he championed his “Square Deal” domestic policies, promising the average citizen fairness, breaking of trusts, regulation of railroads, and pure food and drugs.

Besides the confirmed case of Teddy Roosevelt, others were rumored to have had them as well. In fact, Inked Mag writes that “the first tattoo in the White House may have belonged to the man whose face graces the $20 bill, Andrew Jackson. Rumor has it that Old Hickory had a large tattoo of a tomahawk on his thigh. The choice of ink is quite interesting considering that Jackson served in the military in the First Seminole War and as president started the policy of removing Native Americans from eastern states and relocating them to the west. It’s not hard to believe that Jackson had a tattoo; the man could easily endure the pain considering that he lived the majority of his life with a bullet lodged in his chest.” Mental Floss also notes that James Polk may have worn some ink. “America’s 11th president annexed Texas, but he had another legacy that was just as lasting: starting the trend of Chinese-character tattoos. Polk’s ink translated as “eager,” or so he was told.”

So the million-dollar question is: after the 2020 election will there be any more members of the oval office that have a tattoo? If Donald Trump wins, the answer will be no. In 2013 Trump tweeted, “Word is spreading that I got a tattoo – no way, I am not a fan!”

Word is spreading that I got a tattoo – no way, I am not a fan!

As for the Democratic candidates, it’s hard to say. While we can’t confirm any of them have tattoos, a few of them have been the inspiration behind other people’s tattoos. In 2016 a tattoo parlor in Bernie Sanders’s home state of Vermont gave away free tattoos of Sanders’s distinctive hair and glasses, and people “feeling the Bern” lined up for them. Elizabeth Warren’s one-liner, “Nevertheless, she persisted” also became a hit amongst her fans. Both are pictured below. 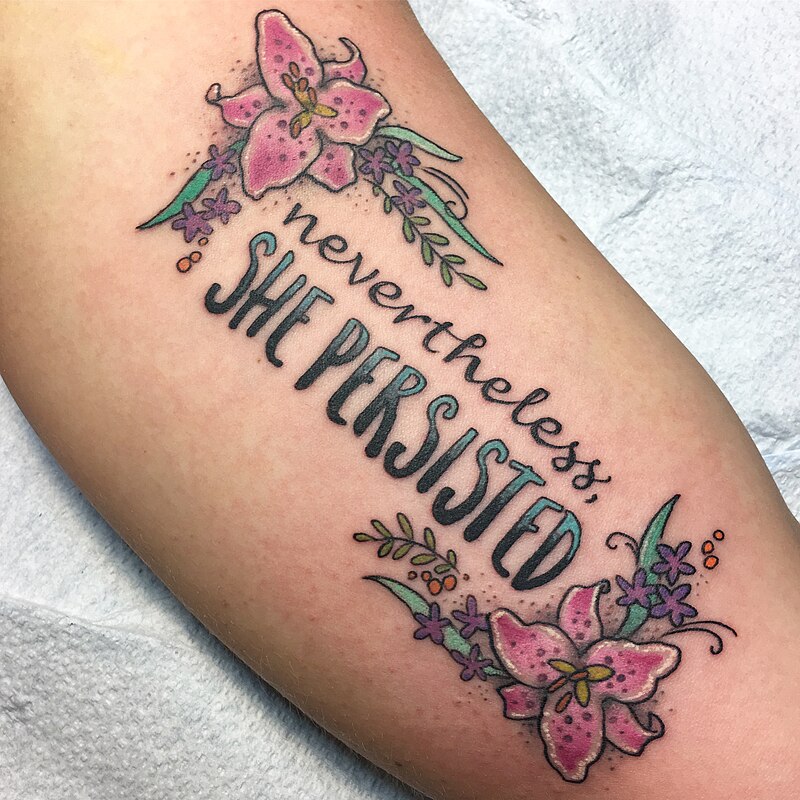