💡 Welcome to our Trivia feed where we Tag important questions and Flag the best answers. 📭 Sign up to our nonpartisan newsletter to have these stories delivered directly to your inbox every morning. 📷 Cover: President Donald Trump waves as he boards Air Force One, June 6, 2019. AP/Alex Brandon

When the framers of the Constitution created the process for Congress to impeach “all civil officers of the United States,” they rejected a much more severe punishment practiced in early America: exile.

That threat was real in the early colonial period. In 17th-century New England, Puritan authorities banished individuals who challenged their rule. Those who challenged orthodox religious teaching or the administration of the colonies found themselves sent to other colonies or, on occasion, to England.

Three cases – the lay minister Anne Hutchinson, Rhode Island founder Roger Williams and the thrice-exiled lawyer Thomas Morton – reveal that the founders understood the difference between actions that posed a threat to the state and those that required less severe punishment, even when the crimes had been committed by those holding high political office.

As the author of a new study of the formative years of New England and a historian with a longtime interest in the ideas that shaped the Revolution, I am keenly aware of the fact that the founders studied history, including their colonial predecessors. Their views of the past shaped the contents of the United States Constitution.

The founders had a particular interest in the history of systems of representative government. They paid careful attention to ancient Rome, seeing it as the most famous example of the collapse of a republic. They knew that they needed protections from would-be tyrants, who would always be waiting for an opportunity to strike.

One way to reduce that possibility was to build in a way to remove a president who committed what they called “Treason, Bribery, or other high Crimes and Misdemeanors.”

But what should happen to someone who was impeached? 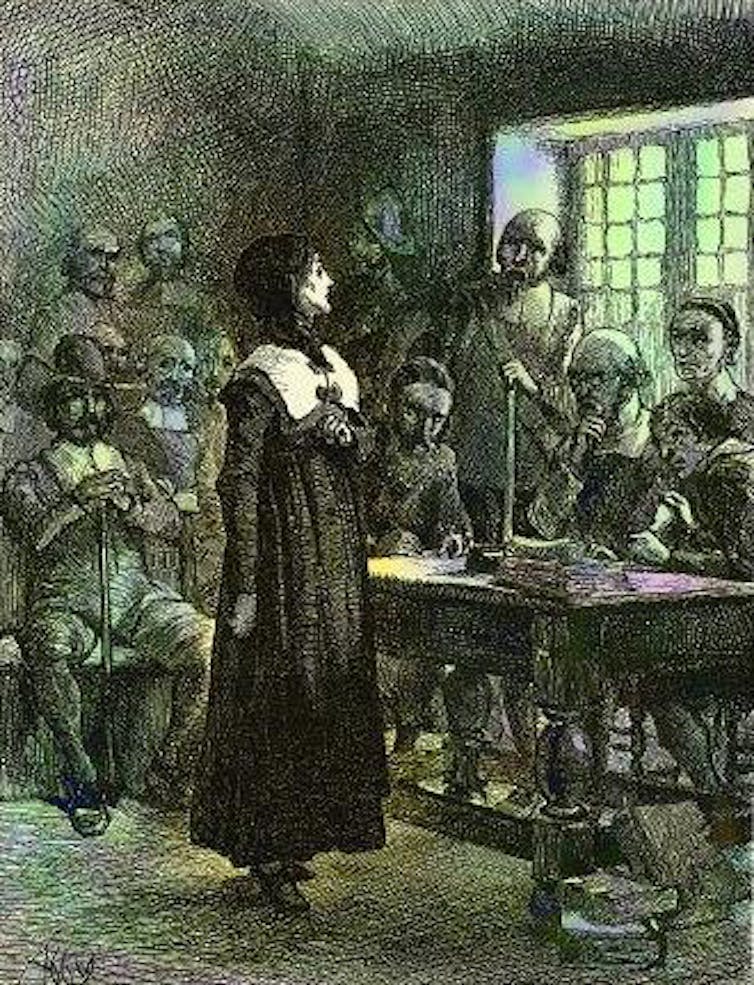 Anne Hutchinson on trial; she was exiled for her beliefs. Edwin Austin Abbey, artist

The punishments any society creates for those it deems dangerous reflect its core values.

In times of war and revolution, governments might choose to kill domestic enemies, as happened when the English executed King Charles I for high treason in 1649 and during the Terror in France in the 1790s, when revolutionaries executed King Louis XVI and thousands of others in their efforts to sustain their rebellion.

In colonial New England, where there was no separation of church and state, authorities saw threats from those who departed from acceptable Puritan values. They established rules for who could be a full member of a church and held to strict ideas about how individuals described experiences of saving grace. They knew that their communities, outnumbered by indigenous neighbors and persecuted for their religious beliefs in England, were precarious.

Soon after the founding of the colonies of Plymouth in 1620 and Massachusetts Bay a decade later, Puritan leaders confronted problems posed by Williams and Hutchinson.

Williams held dissenting ideas about how a church should be constituted and criticized the administration of the colony. Hutchinson spoke about her religious convictions in ways that convinced authorities she was an antinomian, someone who believed she received direct revelation from God. That was an idea authorities deemed theologically – and thus politically – dangerous.

The colony’s leaders decided that both posed an existential threat to the proper working of the community and banished them.

Williams went to Narragansett Bay in 1635, where he founded the colony of Rhode Island, which became famous for its tolerance of religious diversity. He became an advocate for the separation of church and state. Hutchinson followed Williams in 1637, but eventually left for New Netherland, where she died in a conflict known as Keift’s War in 1643.

Morton, a would-be fur trader, danced around a Maypole – an act the Pilgrim fathers deemed sinful. He also sold guns to his indigenous trade partners.

Plymouth’s leaders arrested him and placed him on a ship bound for England, confident he would be jailed for his actions. But Morton never went to prison.

Instead, the next year, he returned to New England, but went to the just-founded colony of Massachusetts instead of returning to Plymouth. Soon he challenged the legitimacy of the new government’s policies, which he believed did not respect the authority of the English king. 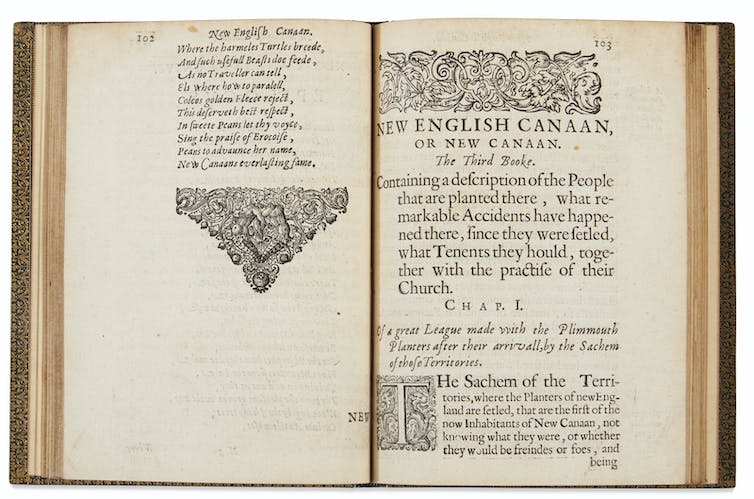 In response, colonial leaders exiled him to England. A decade later he returned yet again, only to be banished a third time when local authorities learned he and others had tried to have the Massachusetts charter revoked.

During his exile, Morton also published a book that ridiculed the Puritans and accused them of violating acceptable Anglican religious practices. A copy of the book had crossed the Atlantic before Morton’s final return.

Infuriated by what they read, Massachusetts authorities imprisoned Morton. Morton by then was, as Governor John Winthrop put it, “old and crazy.” They could not fine him because he had no money. They decided to exile him again, this time to modern Maine, territory which was part of Massachusetts where few colonists had gone.

Morton died there, likely in 1646, “poor and despised,” according to Winthrop.

The actions of Williams, Hutchinson and Morton demanded banishment because each, in his or her own way, undermined the continuing existence of their communities.

Federal office holders who break the law, even in ways that undermine the United States Constitution, need a different kind of sentence: losing office and potentially being prevented from holding another. That was, and remains, a serious penalty.

But the founders believed that the country could withstand the continued presence of an impeached office holder.

We may debate the meaning of “high crimes and misdemeanors,” but the founders understood that those found guilty of such crimes did not need to be exiled.

[Deep knowledge, daily. Sign up for The Conversation’s newsletter.] Peter C. Mancall, Andrew W. Mellon Professor of the Humanities, University of Southern California – Dornsife College of Letters, Arts and Sciences. This article is republished from The Conversation under a Creative Commons license. Read the original article.  Be sure to sign up for Tag The Flag’s nonpartisan newsletter to have articles like this delivered directly to your inbox every weekday morning.