🗳️ Welcome to our Politics feed where we Tag important topics and Flag key takeaways. 📭 Sign up to our nonpartisan newsletter to have these stories delivered directly to your inbox every morning. 📷 Cover: a protest in Brussels, Belgium

Global dissatisfaction with democracy has increased over the past 25 years, according to our recent report.

Drawing upon the HUMAN Surveys project, the report covered 154 countries, with 77 countries covered continuously for the period from 1995 to 2020. These samples were possible thanks to the combination of data from over 25 sources, 3,500 national surveys, and 4 million respondents.

Not surprisingly, the gloomy headline finding – rising democratic dissatisfaction – attracted the most attention. Less widely discussed, however, is the “good news” – that a small sample of countries has bucked the trend, and have record high levels of satisfaction with their democracies. 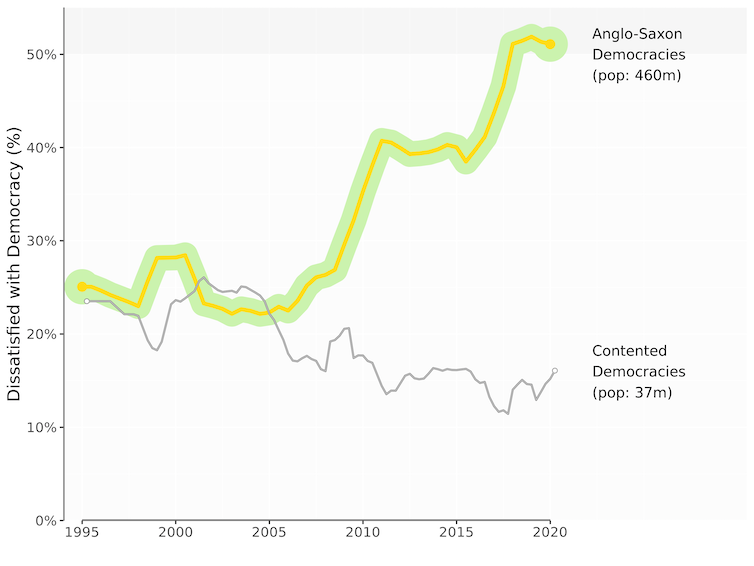 Contented nations are Norway, Netherlands, Denmark, Luxembourg and Switzerland; the Anglo-Saxon democracies are the US, UK, Canada, Australia and New Zealand. The thickness of lines is relative to population in each grouping. Foa, Klassen, Slade, Rand and Williams (2020). The Global Satisfaction with Democracy Report 2020, Bennett Institute for Public Policy, University of Cambridge

Why are such countries – the Netherlands, Denmark, or Switzerland – able to achieve high and rising levels of democratic contentment?

There are four factors that stand out in explaining why some democracies have – or have not – experienced an eroding democratic satisfaction. These can be summarised by four “Ps”: polarisation, paralysis, perfidy (or scandal), and powerlessness.

First, countries with increasing polarisation show rising dissatisfaction. This is especially the case in majoritarian electoral systems that generate “winners and losers”, leaving close to half of the electorate dissatisfied following every election. 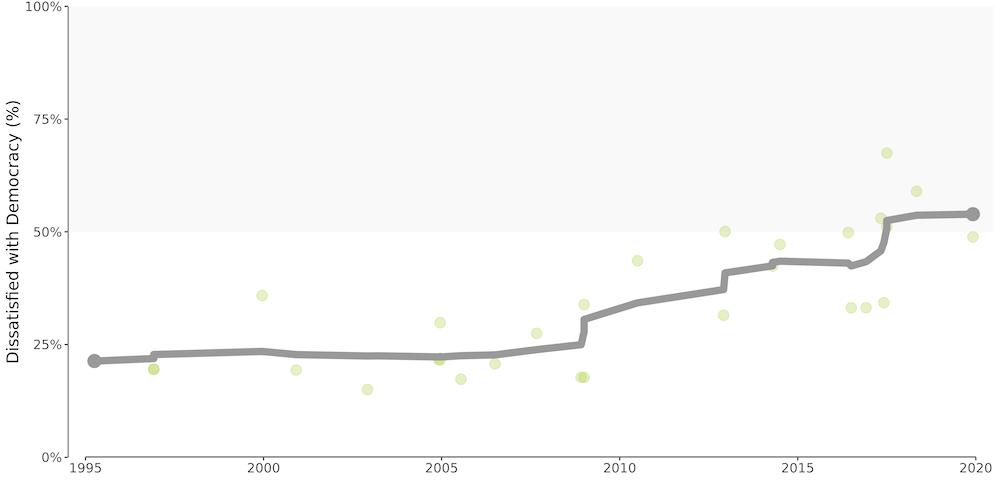 The countries such as Denmark or Switzerland, which we call the “islands of contentment”, on the other hand, have limited polarisation and use proportional representation. The political structures of these nations drive them towards more cooperative forms of politics, and they are often less complicated to govern.

Citizens abhor a political vacuum. Perhaps one of the clearest examples is the UK during the Brexit paralysis of 2019, in which the British cabinet and parliament were logjammed over whether to pass the EU withdrawal agreement, hold a second referendum, or call an election. 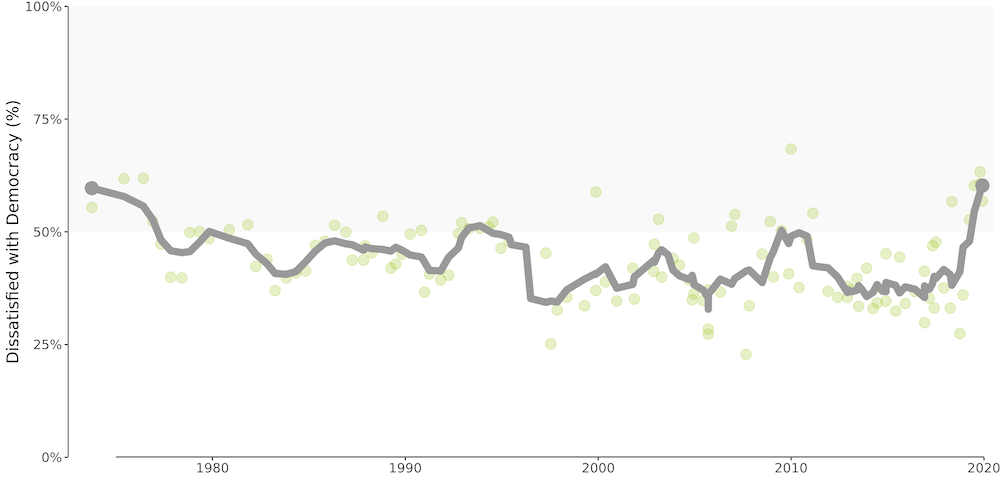 The UK is not the only example: government shutdowns in the US under Bill Clinton in 1995-6, Barack Obama in 2013, and Donald Trump in 2018-9 did not increase public satisfaction. And in Australia, the revolving door of prime ministers between 2013 and 2018 has left many voters dissatisfied.

On the other hand, in countries where there is relative continuity in government, such crises are avoided. In Switzerland, the so-called “magic formula” coalition at the federal level almost prevents such crises by design and satisfaction has been rising.

Perfidy – or, corruption and scandal – is one of the strongest predictors of dissatisfaction with democracy. These can be short-lived, as with the UK parliamentary expenses scandal of 2009, which saw dissatisfaction temporarily spike, or rather longer in duration, such as the “tangentpoli” investigations in 1990s Italy which led to the collapse of the entire party system. 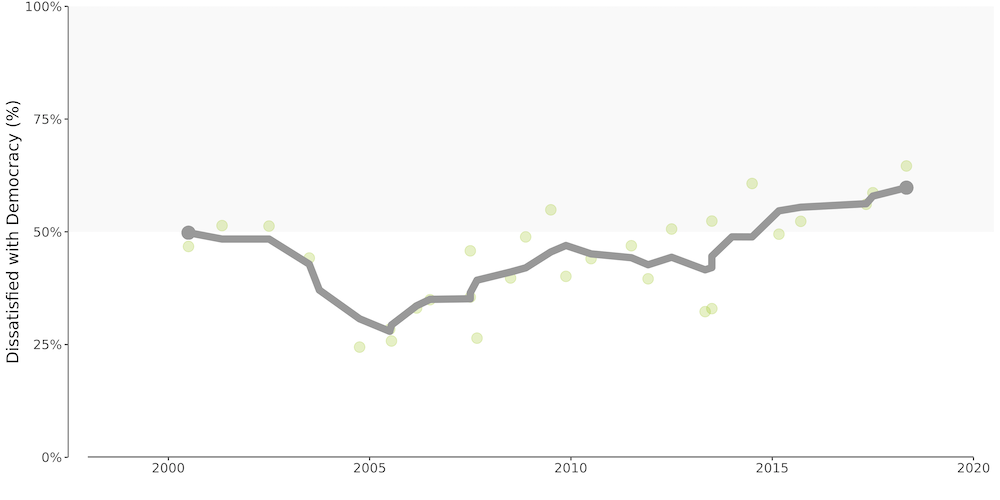 Denmark, Switzerland, the Netherlands, and Luxembourg on the other hand are the first, fourth, eighth, and ninth least corrupt countries in the world, respectively, according to Transparency International.

Finally, citizens must feel that they have agency over the political process.

A clear example of powerlessness is where there is low electoral integrity. Elections are one of the most visible aspects of democracy, and unfair electoral practices decrease public satisfaction.

The unlimited money pouring into US elections since 2010, its demonstrably gerrymandered electoral districts, active voter suppression, and controversies in vote counting have left many disillusioned with the electoral process. Canada is better off, but the circumvention of election finance rules by Conservatives in the 2006 election campaign and Robocall scandal in the 2011 Canadian federal elections did not enhance public satisfaction.

By comparison, the Electoral Integrity Project run by Harvard and Sydney universities, gives Denmark, Switzerland, the Netherlands, and Luxembourg some of the best scores in the world.

Feelings of political agency require a sense of influence over domestic institutions, but also a sense that those institutions are in themselves sovereign. A number of the most satisfied nations in our study are either on the outskirts of the EU (Norway and Switzerland), or not in the eurozone (Denmark), projects that require substantial pooling of sovereignty in order to function.

Meanwhile, countries in southern Europe such as Greece, caught in the eurozone crisis, have experienced a profound breakdown in democratic satisfaction in recent years.

Bolstering satisfaction in democracy will require addressing multiple issues. But acknowledging that democratic discontent has deeper roots is a necessary starting point.

Roberto Foa, Lecturer in Politics and Public Policy, University of Cambridge and Andrew James Klassen, Affiliated Researcher, Bennett Institute for Public Policy, University of Cambridge. This article is republished from The Conversation under a Creative Commons license. Read the original article. Be sure to sign up for Tag The Flag’s nonpartisan newsletter to have articles like this delivered directly to your inbox every weekday morning.