At times the contrast between the real economy and the stock market is striking. For US stocks, April was their best month since 1987, while at the same time real economic indicators – such as employment, manufacturing, services, trade, commodities and GDP – tanked. It seems that in April, the stock market caught the tail end of spring break spirit.

Some suggest this shows investor sentiment is free of any anchor in the real economy. Either this or rampant speculative flows “buying the bottom” have become a self-fulfilling force. I argue that market sentiment in April was informed by twin-howitzer policy deployments of overriding force and clarity, but which are ultimately of finite holding power.

Yet the big step-change increase in initial jobless claims in the week ending March 21 coincided with an extraordinary sequence of dramatic response measures by the US central bank, the Federal Reserve. The stock market’s bounce began on the following Monday and continued throughout April, despite mounting unemployment-insurance claims, which have now crossed the 30 million mark.

One particularly cynical reason for this is that furloughed and laid-off employees relieve businesses of costs. Of course, the wider economy is deprived of their spending as well. But from the third week of March, the trajectories for unemployment and spending were firmly set and known to market participants.

From that time onward, the subsequent rise of unemployment and the associated fall in spending were no longer “unanticipated”. The cascade of furloughs and lay-offs were predictable and so this information was built into both sentiment and stock prices at the time. Hence, the weeks of increasingly dire real-economy figures didn’t move the market in a big way. 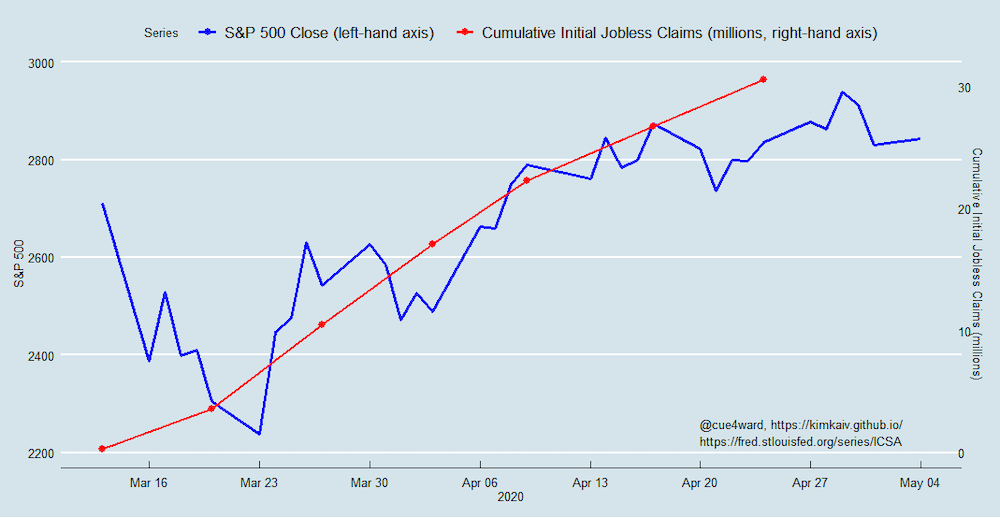 But the more important factor for this month-long rise of the US stock market in the face of consistently dismal real-economy news was the unprecedentedly large, double-barreled federal response – of financial-sector liquidity programs and real-sector stimulus programs – which was also emulated by governments around the world.

The US Federal Reserve’s extraordinary policy measures – and subsequently the nearly US$3 trillion authorized by the US Congress in the form of the CARES Act – provides firms and markets with emergency liquidity support to stave off an avalanche of defaults. Despite curtailed consumer and business spending, these government programs offer businesses a means of avoiding immediate defaults – hopefully until the lockdown policies can be lifted. Think of this as an emergency transfusion and cauterization of the wound.

The economic historian Niall Ferguson has suggested that the sheer scale of this state intervention is distorting the signals we are getting from the financial markets. But the breadth and scale of the intervention has an effect of its own, which is just as important as the support itself. It sends a credible signal that under the Trump administration, business will get all the support it needs to weather this pandemic. The US president sees buoyant markets as the key to his re-election, and he is dedicated to using all means at his disposal to that end.

Buried in the weeds of this global crisis, seeds of destruction are sprouting. Much of the CARES Act emergency support for business consists of lending programs. Of this, the US treasury received US$500 billion to support hard-hit big businesses like airlines, as well as states and cities – with loans, loan guarantees, and other investments.

But already in the autumn of 2019, the debt burden of US corporates approached a whopping US$10 trillion. As a ratio of GDP, the debt of nonfinancial firms in the US is at an all-time high. Some calculations place the proportion of “zombie firms” – companies whose earnings are so low that they must issue new debt just to cover the interest-payment obligations on their existing debt – at 16% among US public companies. Not only is lockdown pushing this figure higher, but so are the very loan programs which were created to serve as emergency lifelines.

For large firms, refinancing continues to be viable, albeit with shortened maturities. Stress-test analysis of S&P 500 firms reveals a shift: fewer strong firms and more weak and vulnerable ones. So even with further top-ups to CARES Act programs, the eventual recovery is likely to be subdued, at least until an effective COVID-19 vaccine becomes widely available.

Kim Kaivanto, Senior Lecturer in Economics, Lancaster University. This article is republished from The Conversation under a Creative Commons license. Read the original article.